I succesfully installed HPE server one year ago.  Default system ROM version was  U32 v2.02.  Subsequently  updates 2.10 to 2.16 worked perfectly by ILO Update Firmware utility . So last version i have today.. ILO5 is version 2.16.

But updates to 2.20 or 2.22 or 2.34 without success.  ILO show message:
"The last attempt to update or upload firmware was not successful. Make sure you are using a valid, signed flash file and try again. If you are attempting to install a component, first upload it to the iLO Repository then add it to the Installation Queue."

So, I tried IloRest by fwpkg U32 v2.22 successfully. But after server reboot I have only version 2.16 again.

Could me to say, where is version U32 v2.22 after reboot?  Or what is current and redundant/swapped version?

The current and redundant ROM information can be checked from iLO under Information-iLO Overview page.

If you find the system ROM still not updated, please perform an iLO reset from Information-Diagnostics page and re-attempt the flash process using "Update Firmware" option in iLO.

Have you also tried flashing the BIOS from Operating System?

thank you very much for your respond.

Unfortunately I do not know the exact syntax for this utility...

What Operating system is the host running?

1. Please update the HPE Innovation Engine Firmware (if not updated) from iLO web browser. You can verify the current firmware version from firmware tab in iLO.

Reboot Requirement: Reboot is required after installation for updates to take effect and hardware stability to be maintained.

May I know if you had performed the steps/workaround shared in the my previous update?

If you continue to see the same issue, please download online version of system ROM as per OS flavour installed and attempt to flash the BIOS. Installation steps are mentioned on the download link itself.

thank you for your respond.

This requires shutting down the respective reboot server. Unfortunately,  we operate our server in a continuous
7x24 service and we must announce a service break at least two weeks in advance. So I assume I will be able
to try out the recommended steps in early August.

Thank you very much for your help and time.

2. If issue persists, please update HPE Innovation Engine Firmware (if not updated) from iLO web browser and then try to flash BIOS update from iLO interface.

Note: Reboot is required after installation for HPE Innovation Engine Firmware updates to take effect and hardware stability to be maintained.

3. Please try to update system ROM from iLO rest as mentioned under installation instruction no below link.

4. If you are still unable to flash BIOS from iLO interface and iLO reset from above steps. Then please attempt to update system ROM online from the operating system level. Do no see online ROM update option for Debian/Ubuntu, please check if you can use another lInux flavour file like RHEL, CentOS etc.

5. Another option is to use Gen10 Service Pack for ProLiant (SPP) ISO which is 2.32 ROM version for DL360 Gen10. You can boot from the ISO and perform the update.

6. If any assistance required with ROM update during the downtime, please reach us by selecting any of the options under "Contact Support" on the web-link below.

my report after downtime:

First, I found out via the POST screen that the backup ROM had already been updated to the newest release 2.34.
POST shows this:
System ROM U32 2.16
Redundant System ROM U32 2.34
Apparently this is the result of my previous attempts. A month ago, I successfully uploaded this version 2.34
and even then I saw that it would not turn into current.

So I think that the BIOS update works, but only on the backup ROM and will not allow it to be
overwritten same version or does the switch backup to curent after flash not work? The update
process failed in the flash phase, there will be no reboot yet.

BTW:
I'm trying to look for errors in some log, but I can't open the AHS log. Viewer writes a message:
Error: File was not able to be processed as SMBIOS type 0 records are not found.

Thank you very much for your help. 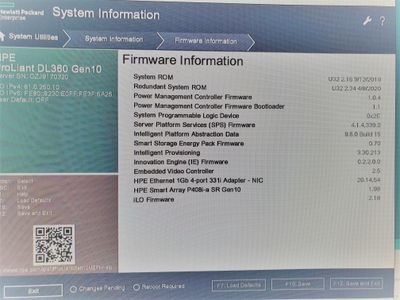 Thank you for the update.

I understand that the backup ROM got updated to 2.34.

In that case, please toggle the system ROM from iLO.

You may refer Integrated Management logs to check if any errors are getting logged. If you want to have the AHS logs analysed then I would advise you to open a support ticket.

- Is there any way to safely overwrite the existing backup ROM?
Updating BIOS should update the primary ROM automatically.
- Would it be possible to downgrade - to version 2.16, ie the same as on the current ROM and then again to update?
Yes, we can swap ROM and downgrad but again it is not recommended. Instead make the latest ROM as primary.
- How would the update behave in POST - F9 - Embedded Applications - Firmware update?

Updating the firmware from the UEFI Embedded Shell

Access the System ROM Flash Binary component for your server from the Hewlett Packard Enterprise Support Center (https://www.hpe.com/support/hpesc).
When searching for the component, always select OS Independent to locate the binary file.
Copy the binary file to a USB media or iLO virtual media.
Attach the media to the server.
Boot to the UEFI Embedded Shell.
To obtain the assigned file system volume for the USB key, enter map –r.
Change to the file system that contains the System ROM Flash Binary component for your server. Enter one of the fsx file systems available, such as fs0: or fs1:, and press Enter.
Use the cd command to change from the current directory to the directory that contains the binary file.
Flash the system ROM by entering fwupdate –d BIOS -f filename.
Reboot the server. A reboot is required after the firmware update in order for the updates to take effect and for hardware stability to be maintained.

- Would it be possible to manually try to switch the backup/current ROM in RBSU?
You can swap from iLO as shared above.