I have an DL380P Gen8, the server was sit on data center rack turned off for about 1 year or more, its the same configuration from the factory, nothing changed. 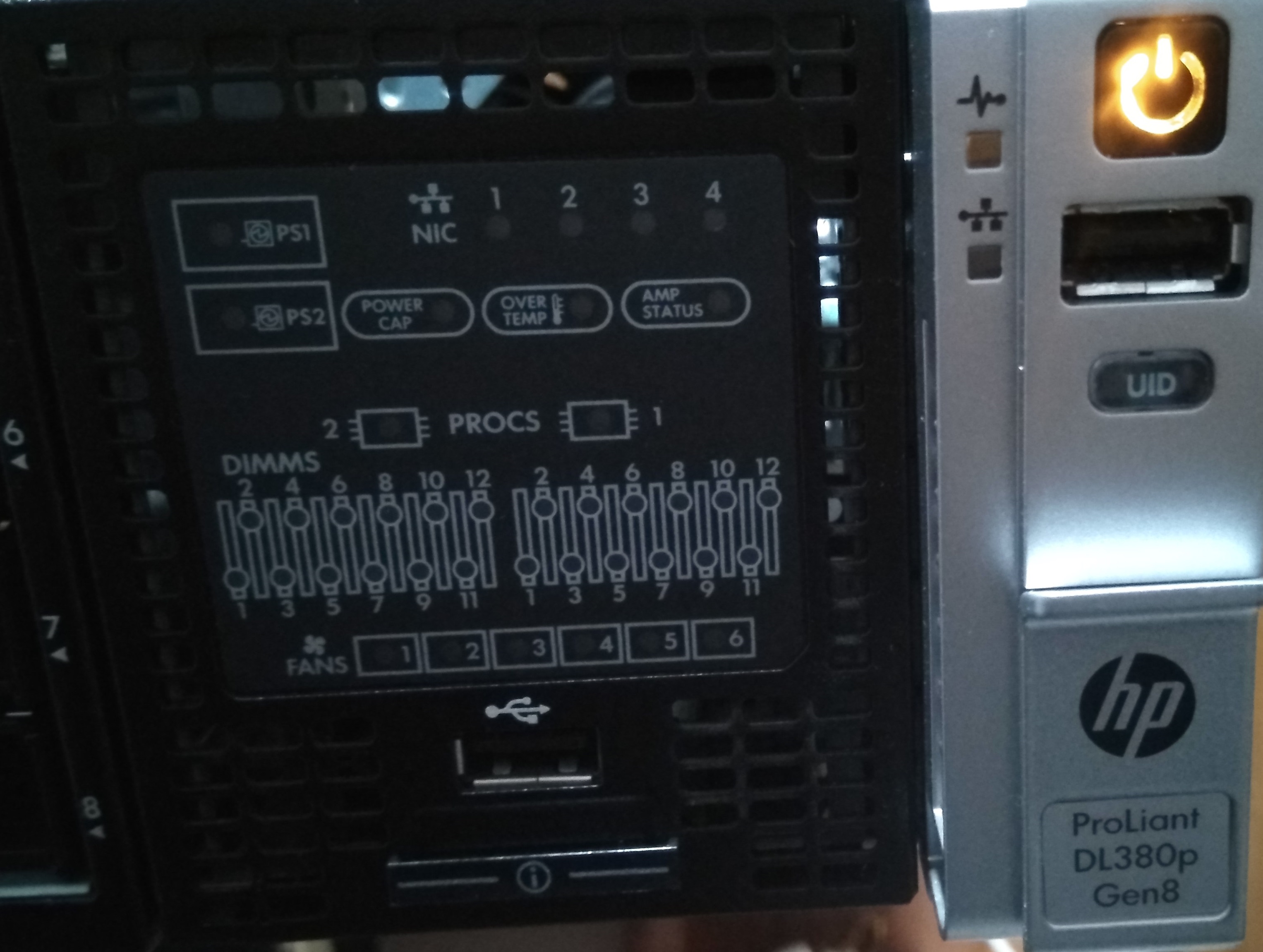 Then when trying to power on, only the power led remain orange, no blinking but no power on, nothing on Diagnostic Panel, i tried several times and nothing, the UUID button not working too, nothing!

I inspected the board, striped most components, cleaned PSU contacts etc, still nothing.

On the main board there's a LEDs called Port 84 from 7 to 0, after some time the 7 lit and after some seconds start to blink. 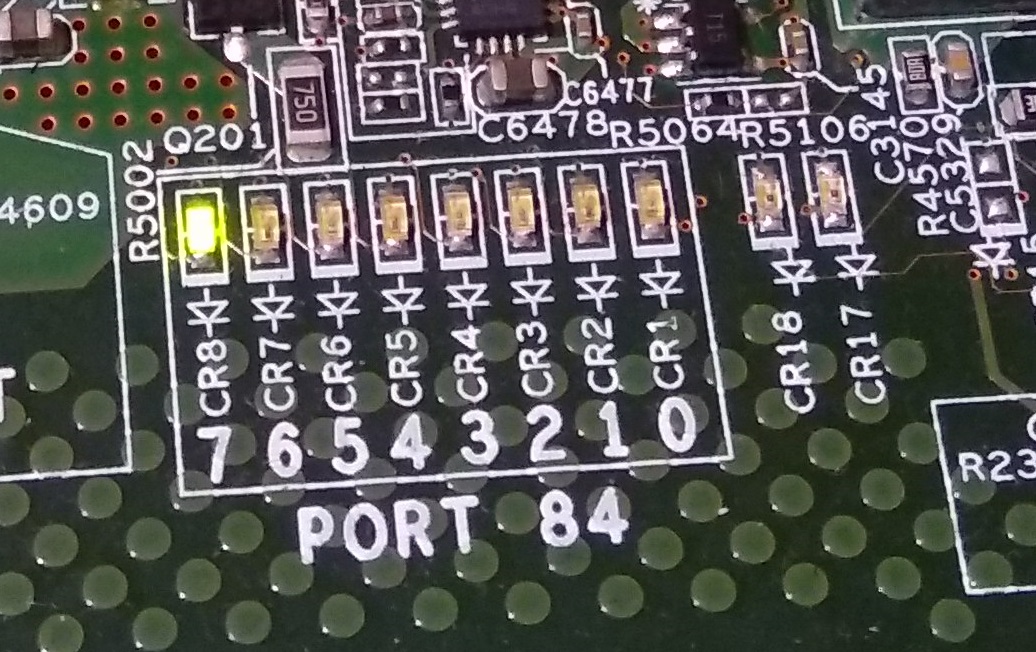 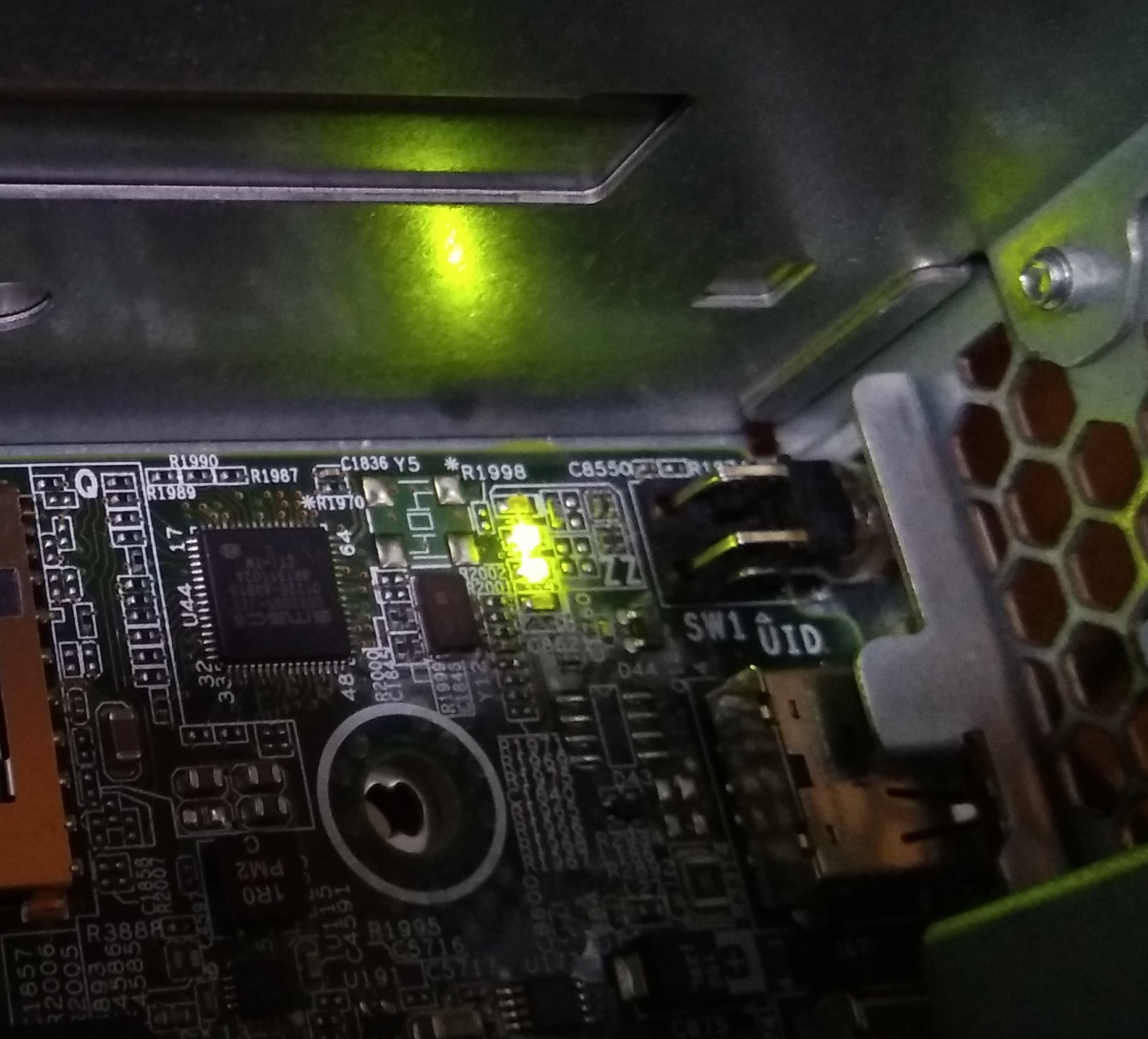 Trying to access iLo or ping the IP was not working, but theirs a LED on iLO port, after some network check i found iLo getting some IP from DHCP, i tried access with all know password, but unsuccessfully. Then cleared NVRAM and set iLO insecure, but turning on 1 and 6 on DIP Switches block, and still nothing, always says wrong password, even the default on from the label, and there's something odd on iLO name, its now iLO-------x in the name, where x is random, but is supposed to be iL0+serial or something, when SSH ask user and password but all incorrect too. 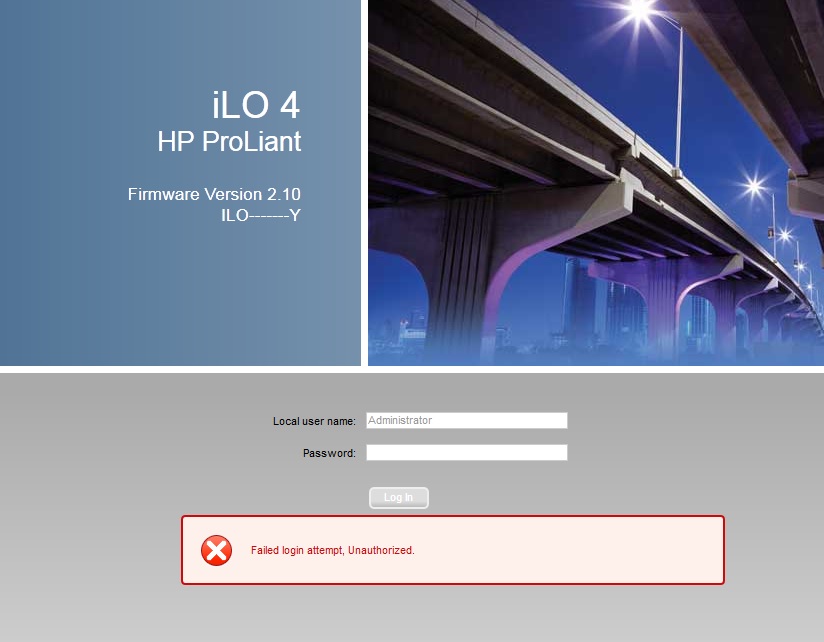 So, i cant power on the server and cant access iLO to check what is going on, and have no idea what the Port 84 LEDs means, anyone have an idea?

Thank you for writing to HPE Community.

Please check the PSU LED, if its off/green,  PSU is most likely good.

If you have already reseated all Procs and DIMMs, then try using Min config and check.

If the server behaves the same way then you may need a replacement system board.

Hi everyone,
Hope everything is ok with all. First i would like to say sorry for my english, i'm from Portugal and i'm having the same issue.
Dis any one seem to find a solution?
My server has beeing working for over 8 months, but last saturday i had to make some changes to my electric plugs so a shutdown the server and did what i had to do.

Since then the server dosent turn on, well it does but shuts down emidietly as soon as the lights of the disks and disks start to spin.
I get the same lights on as mencioned above but also a red one over the network light blinking next to the power button.
I can enter Ilo witch gives me the indication of system health critical but when i press there ot goes to system information where there is a red symbol on BIOS/Hardware Health as Failed.

What could it be?
I leave some photos.
One more thing, i have removed every componente i have on the server e tried putting one by one but it does the same and also tried to use the swap ROM but since it dosent boot, it dosent change the backup ROM.

I also checked the PSU LED and it is off, i only see it green when i turn the server on but shuts down emidiatly as i mencioned. 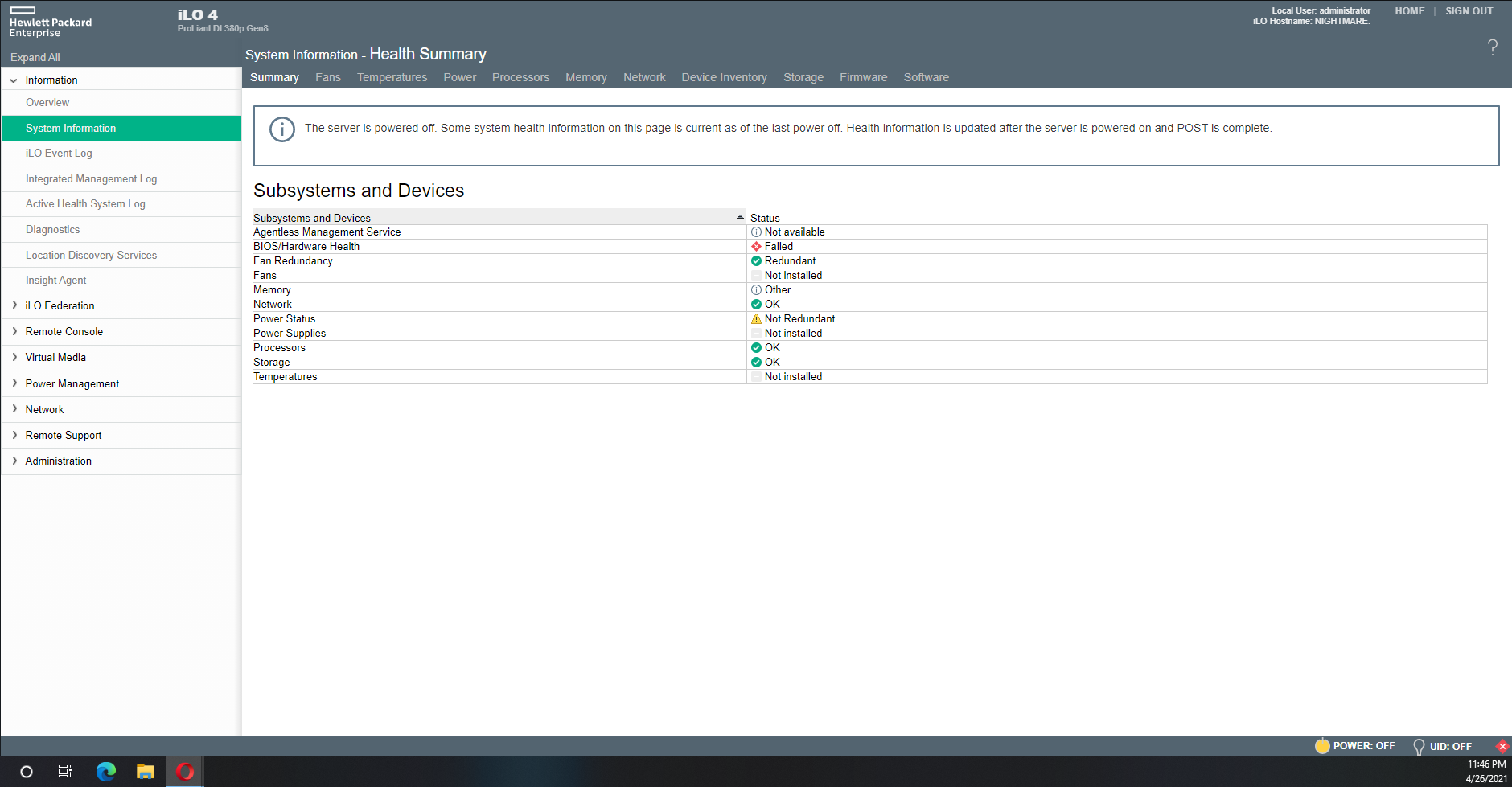 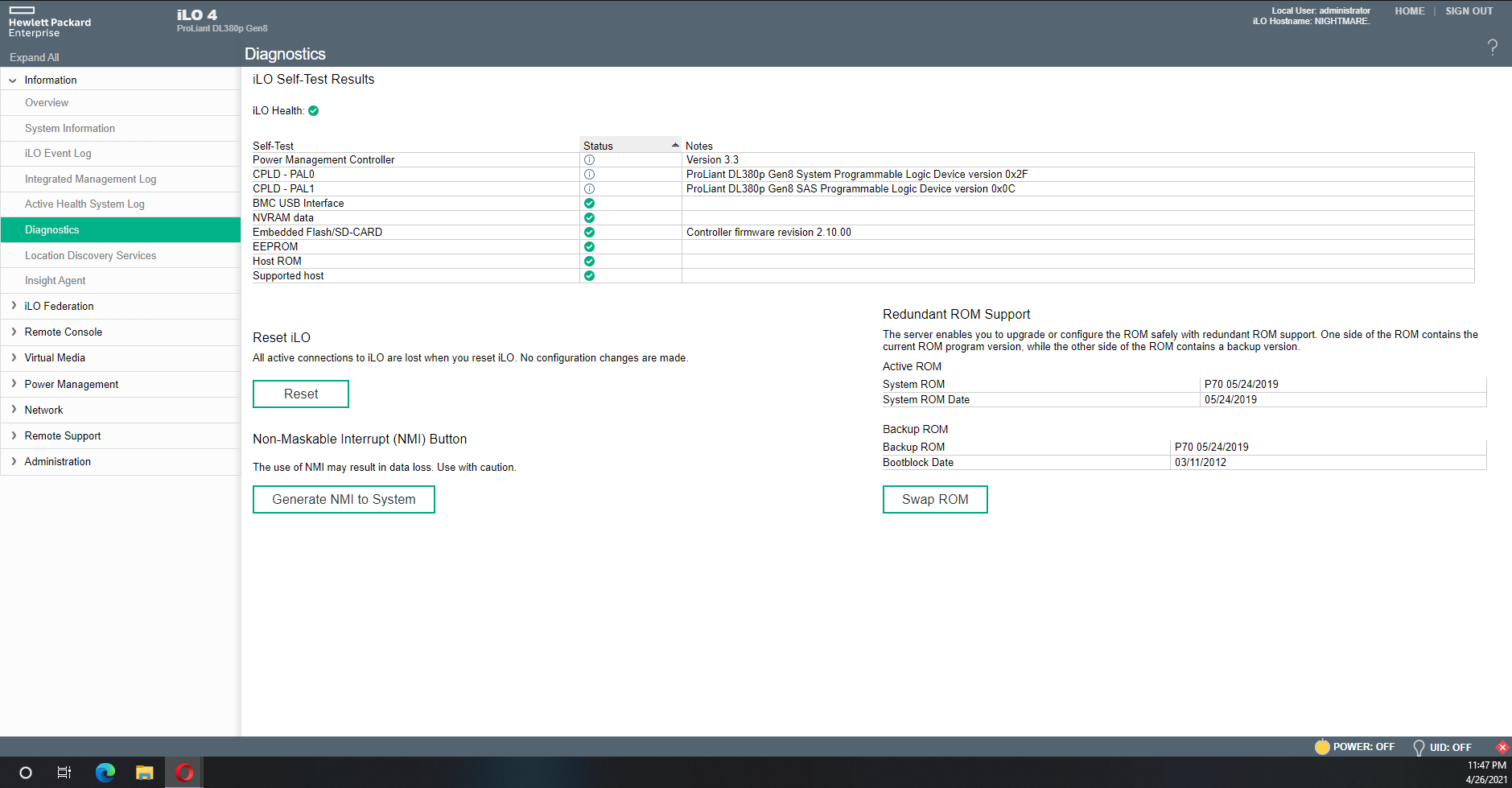 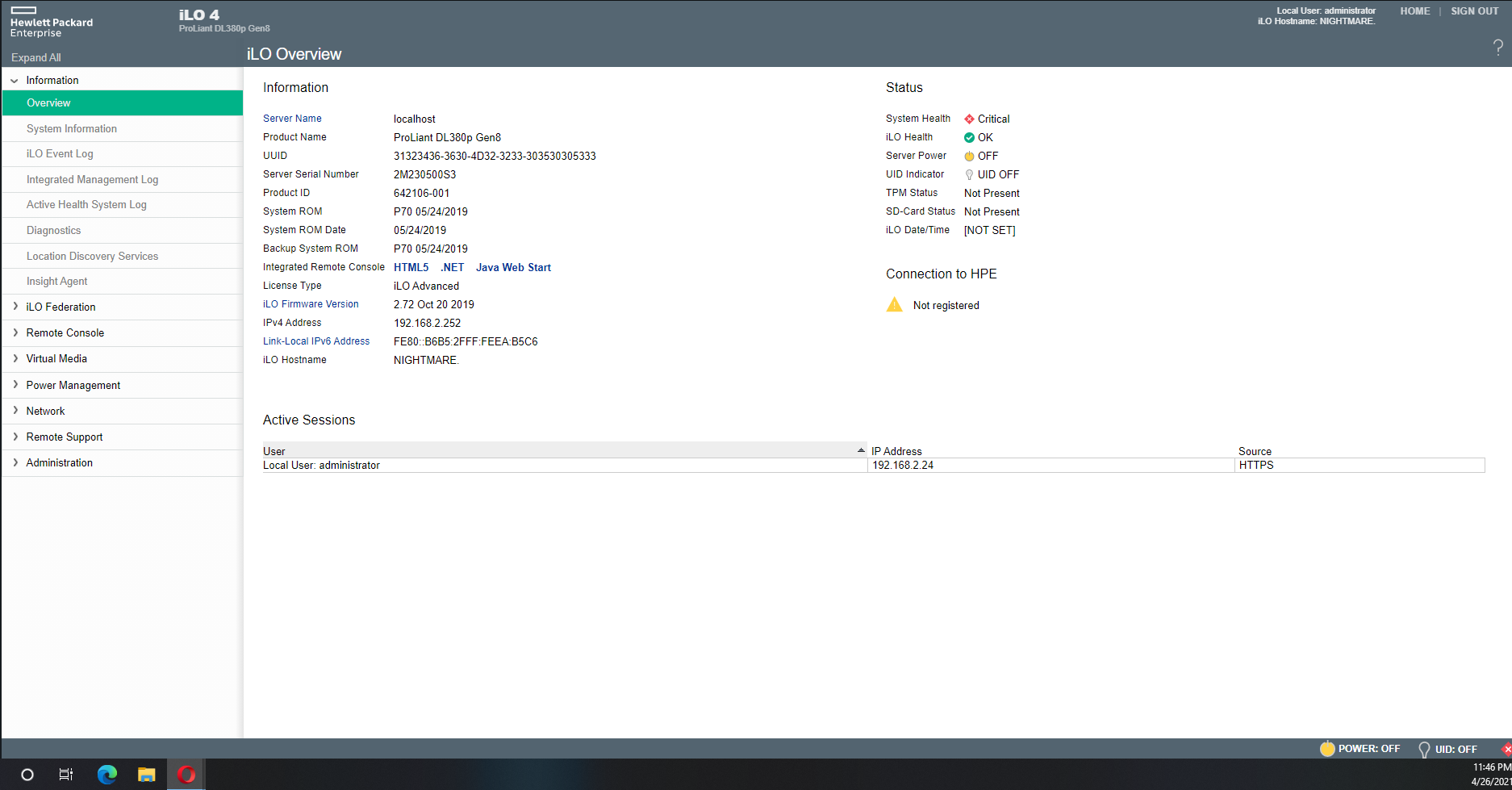 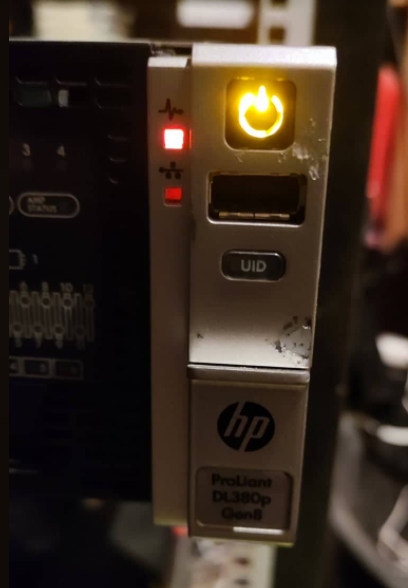 Hope some one can give a solution what it is.

Hi again,
I´m still waiting to see if sombody can help me, i really need to put the server working.
So far, at this moment i took everything apart again and left only 1 cpu and 1 ram and does the same.
The light that is blinking at front its red.
By the legend on the cover of the server it says that blinking fast red is the meaning of Power Fault but i don't seem to understand.
I bought two new power supply thinking it was the power supply units but it does the same.
Any idea what it could be?

Once again thank you.
Carlos

According to the user manual,

there is an insight Display.
Can you access it and check it's output ?

Still, check if it's properly connected. According to the user manual no light is a good sign.

Edit: The default user and pass for iLO should be written on a tag (somewhere at the front) that can be pulled out. Try logging in with those credentials.
0 Kudos
Reply

Thank you for your anwser.
When you say to check the insight Display do you mean the front panel?
If so, then no, there are no lights what so ever even when i turn it on and then shuts down it dosent light any light.

The first picture is from  ColdBlade user, my pictures are the ones that i posted but the lights are off as well as i said above, and if you check the pictures i posted i have access to ILO with no problem.
Thank you once more.
Carlos

can you open a new thread. It seems that your case is a little bit different.
You got a red light on the Health LED, and based on the speed of blinking it means:
Flashing red (1 Hz/cycle per sec) = System critical
Fast-flashing red (4 Hz/cycles per sec) = Power fault**

Hello hunter86,
Yes my light is Fast-flashing red (4 Hz/cycles per sec) = Power fault**.
On my ILO logs i don´t seem to find any erros what so ever except the ones i sent on the pictures.
I did downloaded the Active Health System Log but dont know how to open it.
https://mab.to/fraJycxS7
Here is also my IML log and ILO Event log. Don´t know if it helps. 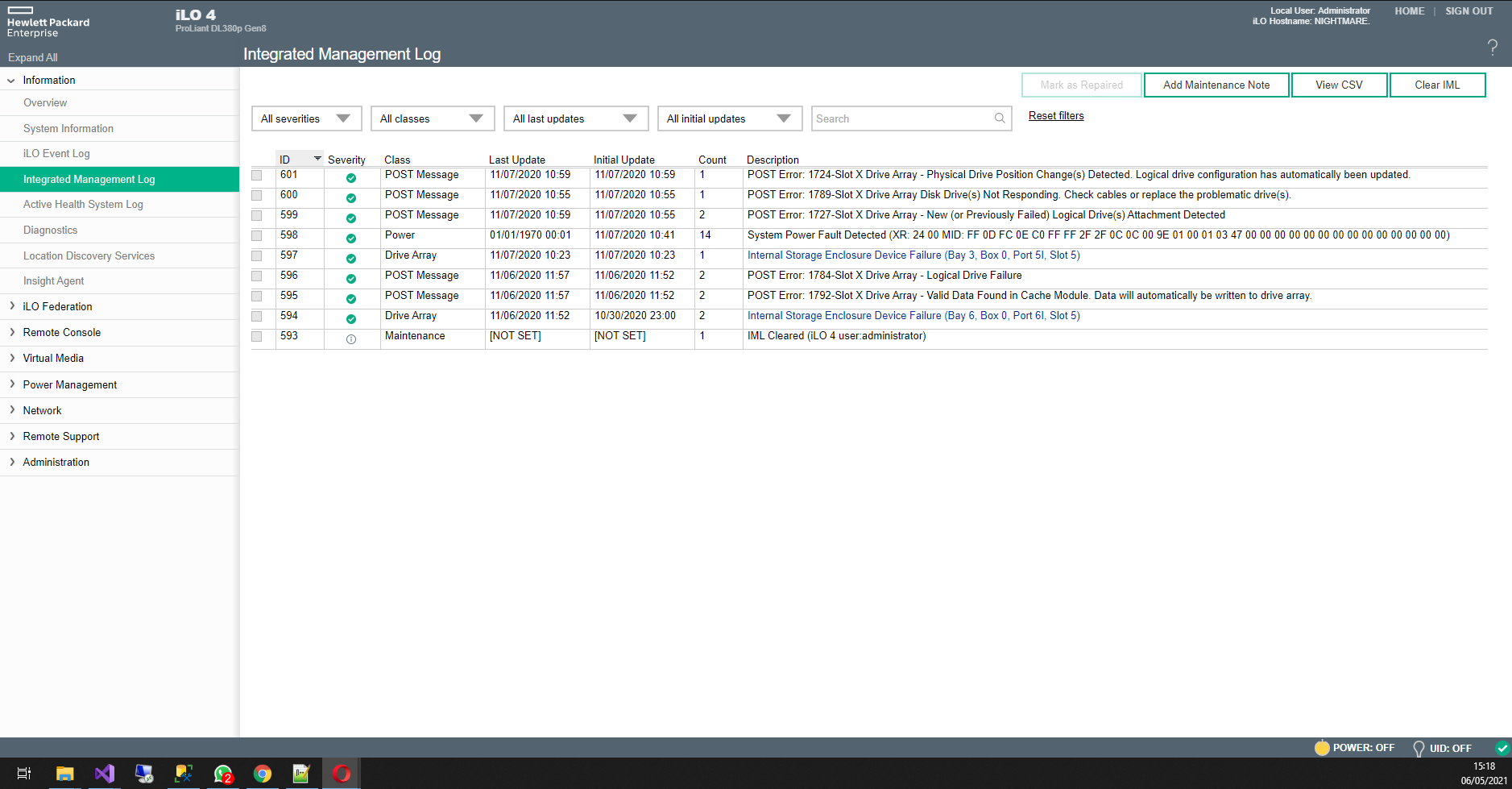 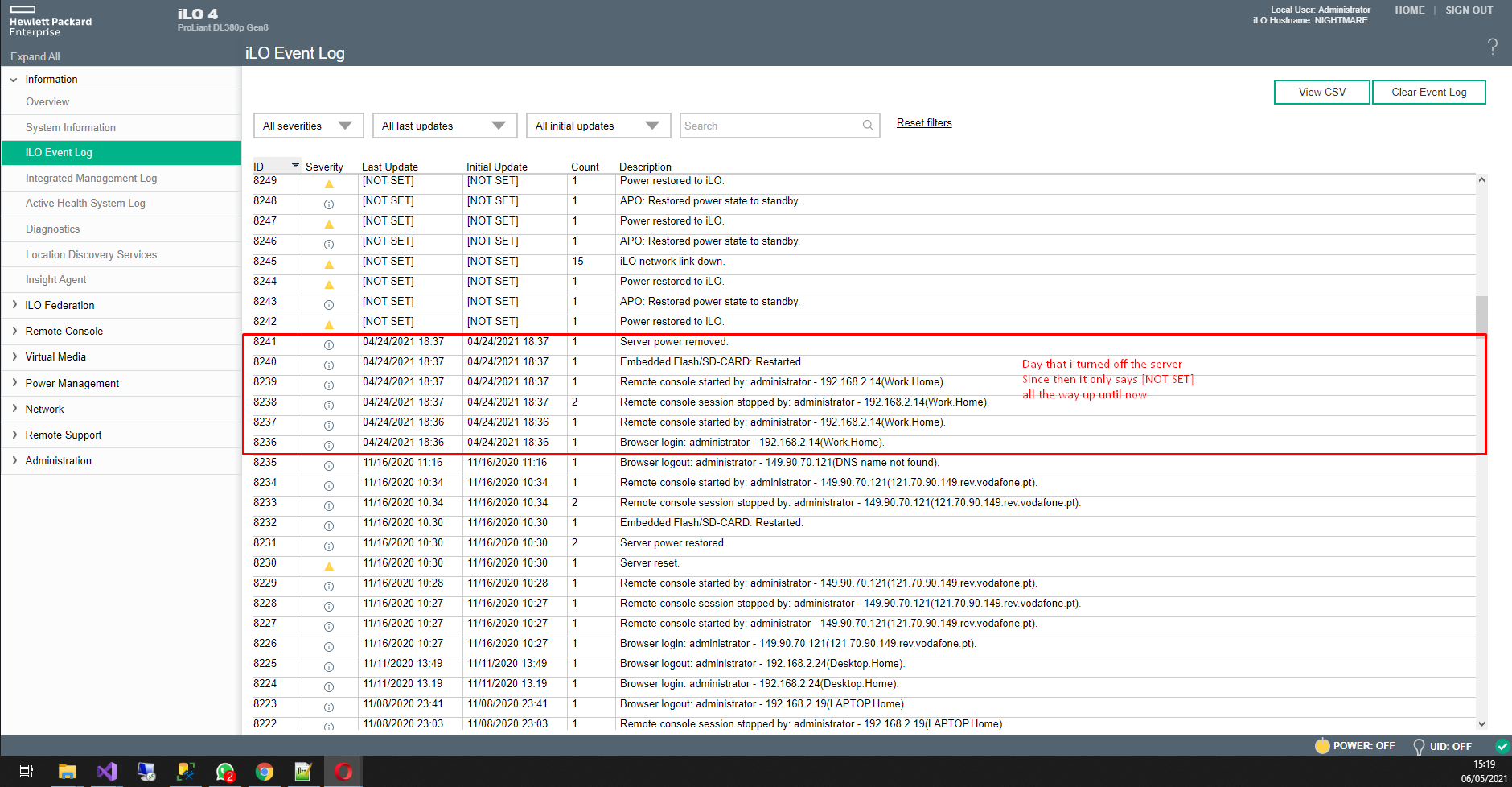 Any way do you think is better to open a  new thread?
Thank you.
Carlos


I have seen similar crashes on Gen9 due to outdated firmware. You can even cold reset the system, just to be on the safe side.
0 Kudos
Reply

Hi  hunter86,
So i flashed ILO 4 with the latest update (2.77) and stays the same.
Bios for this server i was looking for a newer one and it seems that it is the latest.
SSP i cant seem to download, gives me a error that my account isn't allowed to download it.
https://support.hpe.com/hpsc/swd/public/detail?swItemId=MTX_3f6b4074ed734dc3baf007612d

Is ther any link i can get that SPP2017.04.00?
Just for notice, i also did the cold reset but didn't do anything.
Carlos