I  have a new HP ProLiant DL360 G7 system that randomly hangs at the "Power and Thermal Calibration in Progress..." screen during the POST process. This typically follows a warm-boot/reboot from the installed operating system. The system stalls indefinitely at this point. Issuing a reset or cold-start via the ILO 3 power controls makes the system boot normally without incident.

When the system is in this state, the ILO 3 interface is fully accessible and all system health indicators are fine (all green). The server is in a climate-controlled data center with power connections to PDU. Ambient temperature is 64°F/17°C. The system was placed in a 24-hour component testing loop prior to deployment with no failures.

The primary operating system for this server is VMWare ESXi 5. We initially tried 5.0 and later a 5.1 build. Both were deployed via PXE boot and kickstart. In addition, we are testing with baremetal Windows and Red Hat Linux installations.

HP ProLiant systems have a comprehensive set of BIOS options. We've tried the default settings in addition to the Static high-performance profile. I've disabled the boot splash screen and just get a blinking cursor at that point versus the screenshot above. We've also tried some VMWare "best-practices" for BIOS config. We've seen an advisory from HP that seems to outline a similar issue, but did not fix our specific problem.

Suspecting a hardware issue, I had the vendor send an identical system for same-day delivery. The new server was a fully-identical build with the exception of disks. We moved the disks from the old server to the new. We experienced the same random booting issue on the replacement hardware.

I now have both servers running in parallel. The issue hits randomly on warm-boots. Cold boots don't have the problem. I am looking into some of the more esoteric BIOS settings like disabling Turbo Boost or disabling the power calibration function entirely. I could try these, but they should not be necessary.

I've had similar problems in the past. Make 100% sure that the firmware is all up to date. The last issue I had was resolved by a FW update and a BIOS setting. I'll dig through my notes and find the setting for you and see if its applicable. It was to do with power saving modes (i.e.. Disabling them) which isn't great for the environment but they were my Windows DOmain controller ! :)

All firmware is up-to-date. Recall that G7 Proliants haven't had a BIOS update since the mid-2011 revision.

I cannot find the original support case but the resolution was to disable a power saving feature in the BIOS so I would play around with that if possible. I'll keep searching here for the case log but not too hopeful :(

So, after bringing a third system into the mix, and experiencing the same issue, we began to question the environment. I dug up a copy of the HP ProLiant Servers Troubleshooting Guide and found the POST problems flowchart shown below. 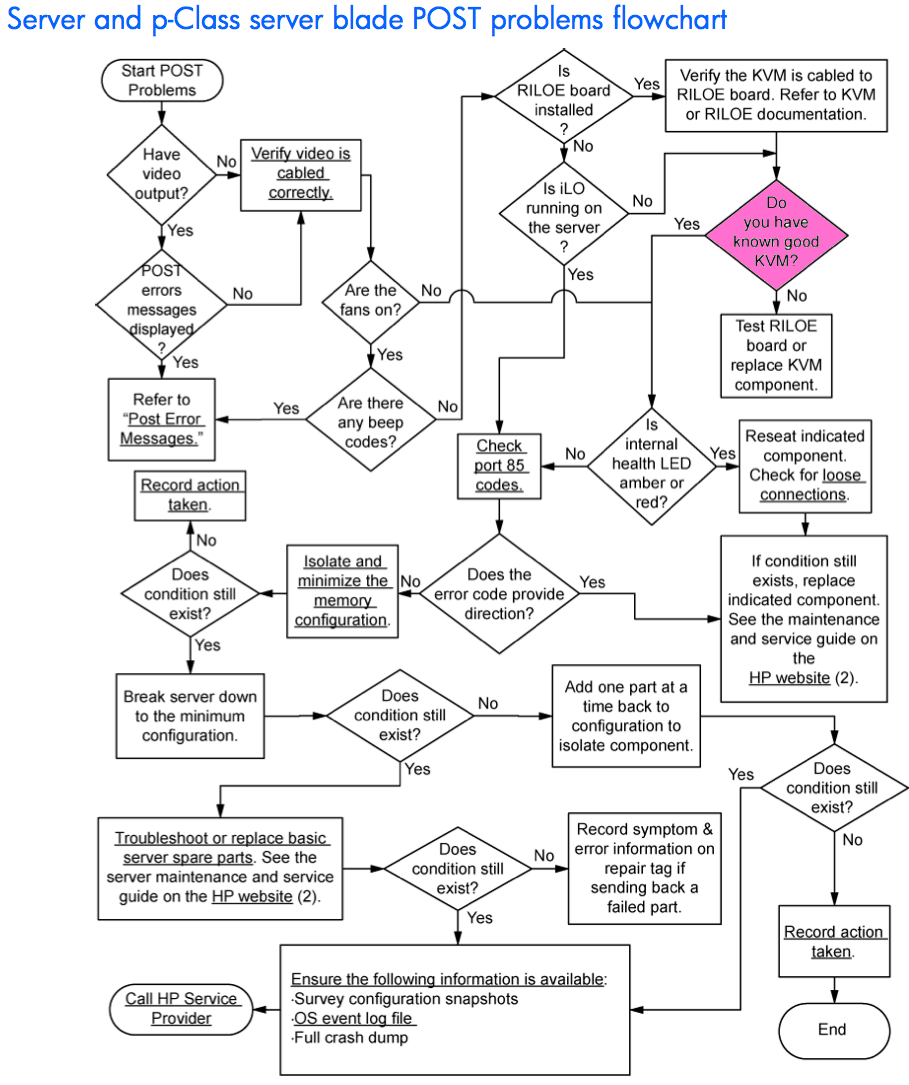 Carefully running through the steps in the chart, we realized that the one constant across all of the servers was a KVM switch attached to the data center crash cart. This was a consumer-class USB-enabled KVM. As per the highlighted node in the flowchart, Do you have known good KVM?, I could not answer conclusively.

So, we unplugged the servers from the KVM switch and ran an automated boot, sleep 300; reboot sequence in rc.local. The servers had no issues with this, regardless of the normal DIMM, low-voltage DIMMS, PSU wattage, etc.

This was all the result of a poor interaction with a USB KVM switch. By virtue that this was the console, it ensured we'd see the failure if we were looking for it. Self-fulfilling...

The issue is resolved after un-plugged the KVM cable. Thanks