Since HP has continued their long-standing tradition of providing half-baked, seriously messed up software for us Engineers to use, for my own sanity I am putting this on the tail end of this thread so I can find it the next time I try to do this...

hpsum-6.4.1-1.rhel7.x86_64.rpm also downloaded from HP. Should be on the cdrom, but isn't, not smart HP. My initial response was "you're kidding right?".  Nope... not kidding...Not Smart update, it is now too dumb to update, doesn't have the program with it to even have the ability to update.

Now on to the main issue.

That opens the Add Baselines screen, find the "Enter directory path line, click on it once, then type in the location of the hp/swpackages directory of the mounted ISO, mine is /mnt/cdrom/hp/swpackages, that is the magic trick, now you can inventory and update..

Poke around and find the right "inventory" button, it took me several minutes and attempts, still don't know which one did it.

Add the new SUP updates for RHEl7, mine are in /root/hpsup/

After the inventory it wants me to de-select the System Management Homepage Templates, whatever, great compatibility testing guys.....why is this included if it doesn't work?

Re-analyze, then deploy..  should finish.. What used to take seconds to minutes now takes hours.....

Agreed that this is frustrating. I had about as many headaches using the Dell server update tool. I think I've gotten better results from HP but it seems like a new challenge every time I work on new servers which doesn't happen that often. Anyway, I got this working by using my Win7 workstation (with IE11) and adding localhost to the compatibility site list. Maybe adding to trusted sites would work as well. Before I couldn't browse to any baselines even though they show up in the library. Now they are selectable. I add the remote nodes of the servers and off I go. What's amazing to me is that the (un)Intelligent Provisioning way to do updates either fails or doesn't show the latest updates. To me that part should just work as every bit of it is under HP's control with the exception of maybe a firewall getting in the way.

This is so frustrating!

I am trying to upgrade our systems using the .iso booting directly from the DVD.

We have a G6, two G7's and then a new G8. Both the G6 and the G7 adds the baseline fine. However the new G8 does not add the baseline.

@kaare_t, what SPP are you using?

I remember an older version had problems to start from DVD, but works fine from an USB stick.

Thanks for the suggestion, but on Win8.1 the USB Key Tool will not install. Tried with Rufus (latest version), but no luck. When I insert the USB and boot the server I get the following error:

Could not find kernel image: vesamenu.c32

When you first start up SUM go to Add New "Baseline"  point it at HP.com and select a local path to save the files from HP.  You will then be able to establish a baseline without a Repository Server.

This was after I ran hpsum.bat as Administrator, turned off UAC and used Chrome as my default browser to accomplish this.  You may also want to run clean-cache.bat before hand. 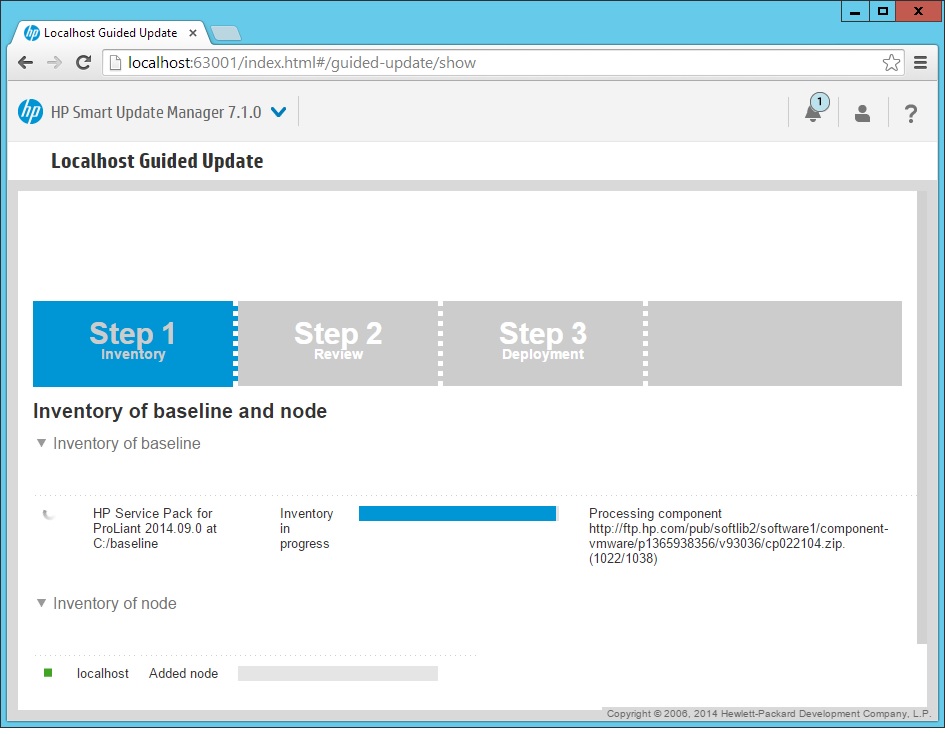 Hi , I had the same issue,  the solution was

i'm apoligse for my confusion, however I don't understand how to resolve this issue with a brand new BL460C Gen8 server with no OS already installed.  I am using the the HP Smart Update Manager (HP SUM) Version 7.1.0 CD (SPPCUSTOM710.2014_0821.18.iso) & get the same problem.

Do I need to install windows first and the run the update from the unzipped CD?  the reason I wanted to upate the firmware as the Inteligent provisioning is not working for windows 2012 R2,  the unattended scripts are not run and the server sits at the install screen,  sort of in a catch 22.