I'm trying to figure out what HP genuine SATA or SAS drives to select for a low cost solution consisting of factory pre-configured:

Since Customer requirements are quite low and the HPE ProLiant DL180 Gen9 (with 1 CPU Intel Xeon E5-2609v3 and 8GB RAM DDR4 ECC) + P440/4G is on sale pre-boxed at a very good price I though I can use SATA drives instead of more performant (and expensive) SAS drives...but I'm start having really big doubts about what SATA/SAS Disks to select (Compatibility), how to verify that a correct LFF Disk Cage is yet present and that Smart Array P440/4G Controller internal cabling come pre-installed (QuickSpecs didn't help me as I expected).

Thanks for any help!

I was able to found the HP ProLiant DL180 Gen9 Server - Option Parts page that has a plenty of informations about that.

What is the product number of the server?

Hello, the only code (which is not the Product Number) I have from the Hardware Distributor (*) is actually this one:

This is the brief (one row) description for that HP Code:

and then few more details into its description:

But that SKU refers to a DL180 Gen9 equipped exactly with the HP H240 Smart Host Bus Adapter instead of the more expensive HP Smart Array P440/4G...so I say they look just "similar".

Edit: (*) just to be clear, it is a quite large Cash and Carry national (Italy) HW&SW Distributor in partnership agreement with HPE...

That is why I was asking for the product number (SKU), it should be on the slide out tag that has the serial number information on it.  Wanted to determine if it was a base model that your retailer added parts to, or if it shipped from the factory with the P440. If your reatiler installed the card without the cable, they owe you a cable

Thanks! exactly...since I didn't purchased the product yet I'm now forced to ask about that SKU directly to the retailer and post back.

Edit: I found a localized (italian only) page with the product L9N12A here but there isn't any clear reference to its composition as the one (with P440/4G) proposed by the retailer. Sent a mail...let we see what they say.

Retailer wasn't very collaborative today...they said that they aren't able to help in finding the SKU or whatever about this specific pre-assembled solution (Gosh!): they said the box is as-is and pre-assembled directly by HPE, they act as box-movers...so I must trust HPE. I do. 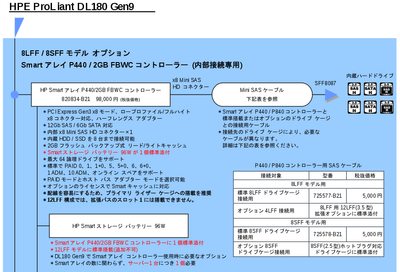 Thanks to an illustrative Japanese QuickSpecs that provides a nice graphical flowchart (language doesn't really matter, SKU codes do).

Hello good afternoon. I have decided to ask the question here so I do not have to open a new post, since the question does not require it.

It turns out that I have the same P440 / 4GB controller in an ML110 G9 and 8x6TB, and I wanted to ask what is the total capacity of terabytes that it can support in hard disks, and that we can currently buy disks of up to 14 TB.