Last night I successfully installed a GeForce GTX 1080 card along with all Nvidia and vendor drivers into my ML350p Gen8 server running Windows Server 2019. This is something I have been burning to do for a while. I know others have asked about this on various forums so I will share my experience.

I used a 10 pin 8 pin to dual 6+2 pin cable from Kareon Kables for powering the card. They have both an online shop and an eBay store. Be sure to plug the 10 pin 8 pin end into one of the black connectors by the motherboard. The white connectors are used to power the drive cages from what I understand. My cable was 12 inches long and it was just barely long enough to slip under the fans and come up to plug down into the power connections of the card.

With the card inserted and plugged into a monitor you would think it doesn't work upon powering up the server. It turns out the Earily System Initialization only comes out of the Embedded Video. After that step is done video from your GPU is enabled and the Embedded Video goes blank. You will see a new splash screen. Also, some of the text you normally see during POST will be in color. It kind of reminded me of BBS login screens from the early 90's.

Windows Server 2019 booted up just fine but at a low and fixed resolution. Drivers for the card must now be installed. Nvidia offers two versions of their drivers: a standard version and a DCH version. The versions are almost same functionally in that they install the drivers and the GeForce Experience. However, the DCH version will not install the Nvidia Control Panel. The Nvidia Control Panel would have to be installed through the Microsoft Store. Windows Server 2019 does not come with the Microsoft Store! The Store also is not officially supported in Server. Smart talented people have manually installed the Store onto their machine but it seemed cumbersome, complicated, and unnecessary. The much easier and much simpler solution is to use the standard version of the driver. To get the standard driver go to :

Use the pull down menus to select the proper product. I installed the Windows 10 64-bit version on my Server 2019 system without any hitches. This will get you the drivers, the Nvidia Control Panel, and GeForce Experience. After all that is installed you can change resolutions. Programs that leverage GPUs, like everything from games to distributed computing platforms to whatever, will see the hardware.

Next you will want to install a GPU clocking and monitoring engine. Yes - overclocking! I believe it's a "must-have" whether you want to squeeze in a few extra frames per second or decrease compute times. My 1080 card is from Gigabyte and they offer Aorus. You can use any engine from any brand. A 1080 is a 1080 is a 1080 regardless of brand wheather it's Gigabyte, MSI, or EVGA. MSI's tool is considered the best but I decided to stick with Aorus just because. No reason, really. It's known to be a little simplistic and buggy but I'm not a power user. Once I find my stable settings I leave it alone.

BOINC recognizes the GPU card and sends it work units. I was able to fire up some games and they worked just fine on high or near highest settings.

I would like to add a second GPU card in PCIe slot 3 but am seriously worried about how close the card sits against the air baffle. Running in that slot I'm afraid the card would run hotter than normal and choke a bit. The official Nvidia Quadro cards must be single width.

I hope this information helps someone one day!

I made a serious typo in my message when referencing the power cable for the GPU card. The cable end that connects to the motherboard has 8 pins ... not 10 pins! I corrected my post but wanted to highlight the change.

One thing I forgot to mention!

And one thing I just came across that I should have checked before even starting!

I completely missed double checking with the user guide before going ahead with this installation! The text is quite clear on which slots support installing a GPU card. One line in particular stands out to me.

That's what I ended up doing anyways.

Note to myself - RTFM!

What power supply do you have and what do you recommend?

I have 2 x 750W supplies in my machine. Unfortunately, I can't recommend anything one way or another because I don't know how much (or how little) hardware you have in your machine.

My machine currently has:

I'm also running one of my Ethernet ports at full throttle

Nothing has burned out yet.

Just wanted to highlight I made a typo when referencing the cable. I called it a 10-pin cable when it really should be 8-pin. Sorry!

I don't feel my fans run high at all. My Power Regulator is set to "Static High Performance" and I'm always running something crazy in the background. Maybe they are running high but I just don't realize it?

What program are you using to check on fan speeds? I can run it on my server and tell you what it says.

A weekend is upon us ... and, I can finally dig back into my beloved ML350p! Well, at least a little bit.

I discovered I can check the fan speed using the HPE Insight Dagnostics available from the HPE Systems Management Homepage. See the screen cap below. 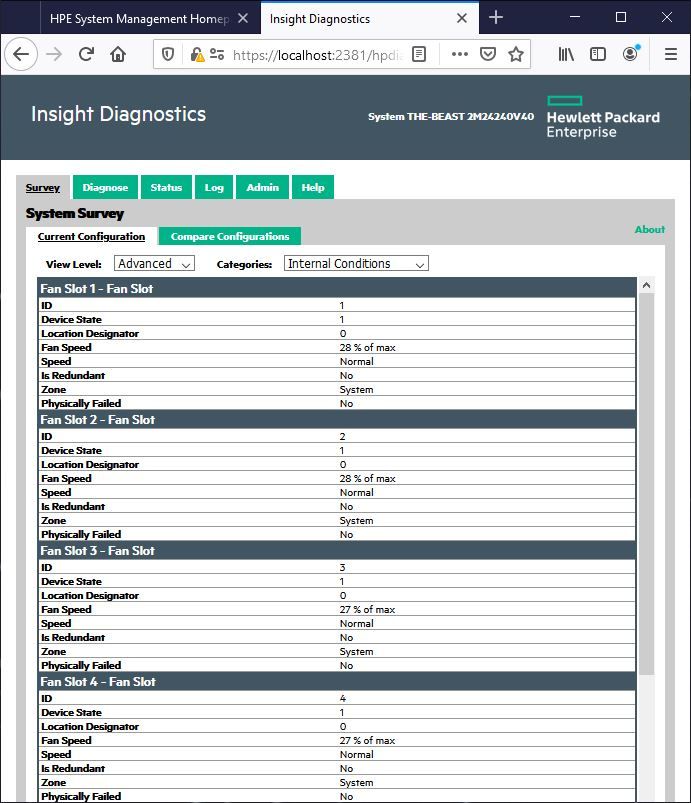 So, it looks like my four fans are running at 27%. - 28%. The screen cap is a little small here but if I scroll down a bit then you would see my CPU and memory temperatures at 45 deg C and higher. This server does not run cold, especially compared to today's machines. I hear the fans spin up and down when I load up the machine, especially I'm running all 24 cores. Now that's loud!

To be thorough I ought to remove the 1080 card and see what the fan speed wiithout it. Let's see if I can do that tomorrow.

—
Boris
1 Kudo
Reply
The opinions expressed above are the personal opinions of the authors, not of Hewlett Packard Enterprise. By using this site, you accept the Terms of Use and Rules of Participation.