Apologies for the delay in my response, I've been busy with other priorities. I recently found time to turn my attention back to this old G6.

I visually examined both system boards (the original and the replacement with the CPU and heatsink holders removed) and the capacitors seem to be fine (no bulging caps or burnt out traces). The capacitors on the power supply board also look fine.

Rather than start to electrically test and swap out caps, I found a bare bones working ML350 G6 on eBay for £150 so bought it and swapped in my RAM and X5670 CPUs; it works perfectly. Note that the new system board is revision "0B", as opposed to "0A" of the other two boards.

So, it looks like the issue is either a) the two previous "0A" system boards are dud (pretty unlucky) or b) the power supply board is a dud.

As frustrating as it is, given that I now have a working system I'm going to have to give up on the root cause. If I had the time it would be nice to take one of the old "0A" boards and put it in the new server (with the new power supply board) to see if that's the cause.

Thanks again everyone for your input.

Thanks for taking the time to update us. We have a ML350 G6 so it's good to have a record of what to watch out for.

I have exactly the same problem, and the solution was, to check the memory population order. The first channel is the nearest three dimms to the cpu. 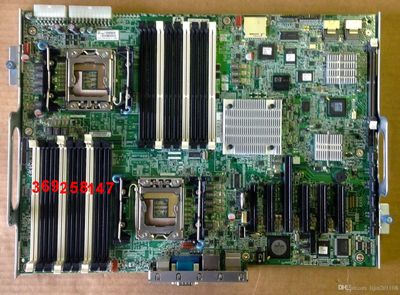 I have the same issue with a 0A board. I tried a lot of different memory configurations with the 2nd cpu installed but none worked. This really sucks because I already wasted money and effort getting the extra components for the 2nd cpu installation. I suspect the board is flawed and it might even be the reason 0B was released. I tried it with 2 different sets of CPUs and neither worked. It wont POST. I also tried removing the lga1366 metal socket clip by unscrewing the 4 torx screws and taking out the metal bracket. The heatsinks still pushed the cpu down. This was to test out the theory of Rob_at_NSIT that the this part interferes with some of the memory traces. I'm 100% sure the socket pins are all still good. I inspected it very thorougly and I also tried all other suggested things like resetting the board with the DIP switch 6 and removing the coin cell cmos battery and shorting the leads for a while.

I have the same problem have tried all of the above..