What exactly controls the network activity LED on a DL360p Gen8?

I have two servers where it never lights, and the configuration is nearly the same as the others (10gb card in the FlexibleLOM slot) but these have an Ethernet NIC in the “large” PCI express slot instead of the “small” one.

Not a big deal, but it would be nice to understand.
1 Kudo
Reply
9 REPLIES 9

What I’m asking, again, is: What controls the aggregate network LED? What would cause it to be not lit when I have a FlexibleLOM NIC and a pci express NIC that both have good links?
0 Kudos
Reply

There are two LED indication on each network port, may I know which of LED is not lit or both the NIC LED having no indication.

What is the link status on iLO web conole for these network ports?

It's the "aggregate network status LED" on the front of the server.

iLO has good links for port 1 on each card.

Below are the Aggregate network LED status:

OFF = No network connection.

I'm not convinced.... the two servers in question have a slightly different hardware configuration than the rest, and the only difference is the ethernet NIC is in the larger PCI Express slot instead of the smaller one.  Before I changed them, the activity LED was working fine.

Thank you for sharing the addition information.

This is the information what we are looking from you. Based on latest information we did below test on lab server and noticed that Aggregate network LED only lit when good link network cable connected to embedded NIC (FlexibleLOM NIC).

Lab activity outcome for your reference:

We did the testing with below network Adaptors. 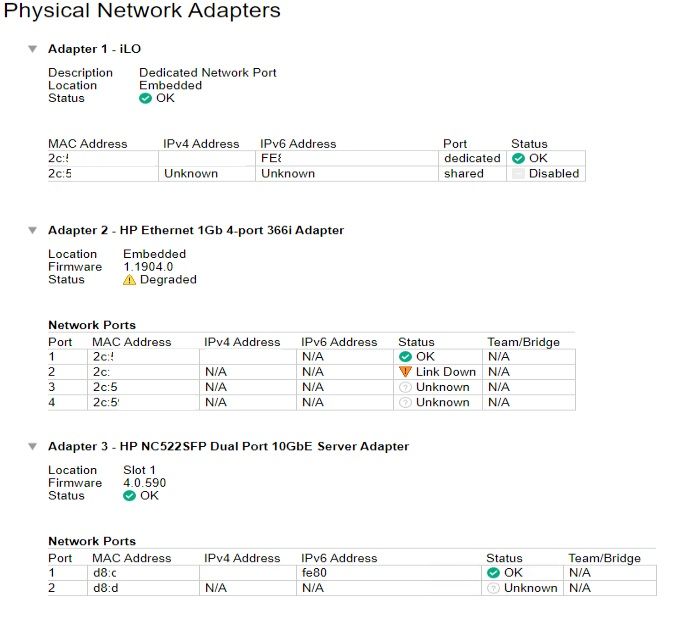 Snapshot of the front panel of the server with Aggregate network LED status. 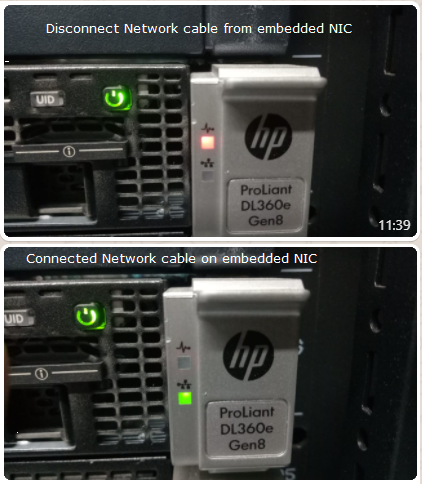 Thank you for taking the time to test this in your lab! Just as an FYI, my servers in question are DL360p and not DL360e, not sure if that makes a difference.

So the server where the activity LED works has the following NICs:

The other two servers have:

So the servers where the activity LED does not light have the exact same FlexibleLOM card running the exact same version of the firmware, and a good link on the same port.

The difference is that the "working" machine has a 332T in PCIe slot 1, whereas the "non-working" machines have a 331T in PCIe Slot 2.  I have not yet had a chance to swap the cards around to see if that has any effect, but I suspect it's this difference that is causing this (minor) issue.

An update, I believe I've narrowed it down to the 571FLR-SFP+ cards.

In the two servers where the lights do not light, I tried a card from a server that does light.  Different card, but same transciever and fiber line.  The working light follows the card.

So this means I have two servers that have potentially misconfigured or not-properly-working 571FLR-SFP+ cards, although performance and reliability have seemed fine.  It's not really a big deal, but it's an interesting problem for sure.

I did check the labels on the cards - they all match exactly - same part number and other reference numbers.