If You are Not Using Intelligent I/O Adapters, You Should Be!

If You are Not Using Intelligent I/O Adapters, You Should Be!

Like a kid in a candy store, choose I/O wisely.

Remember as a child, a quick stop to the convenience store, standing in front of the candy aisle your parents saying, “hurry and pick one.” But with so many choices, the decision was often confusing. With time running out, you’d usually just grab the name-brand candy you were familiar with. But what were you missing out on? Perhaps now you realize there were more delicious or healthy offerings you could have chosen.

I use this as an analogy to discuss the choice of I/O technology for use in server configurations. There are lots of choices and it takes time to understand all the differences. As a result, system architects in many cases just fall back to the legacy name-brand adapter they have become familiar with. Is this the best option for their client though? Not always. Here’s some reasons why.

Some of today’s Ethernet adapters provide added capabilities that I refer to as “Intelligent I/O”. These adapters utilize a variety of offload technology and other capabilities to take on tasks associated with I/O processing that are typically done in software by the CPU when using a basic “standard” Ethernet adapter. Intelligent offloads include things like SR-IOV, RDMA, iSCSI, FCoE or DPDK. Each of these offloads the work to the adapter and, in many cases, bypasses the O/S kernel, speeding up I/O transactions and increasing performance. 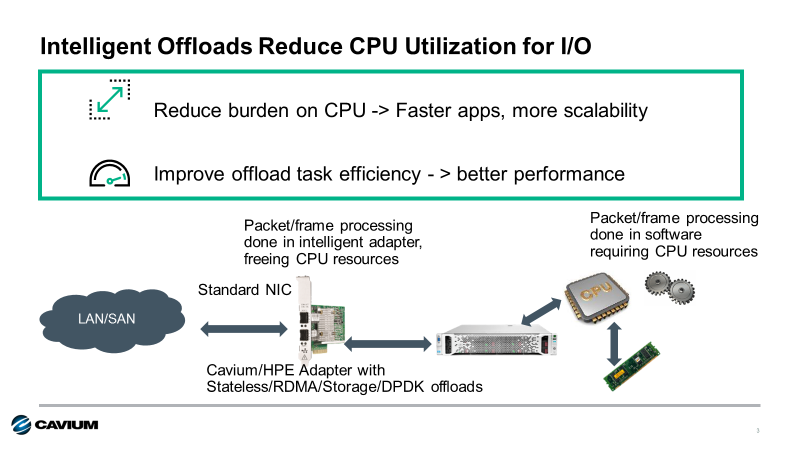 Storage offloads and offloads like SR-IOV, RDMA and DPDK all bypass the O/S kernel. Because they bypass the kernel, the performance impacts of the Spectre and Meltdown fixes are bypassed as well. This means I/O transactions with intelligent I/O adapters are not impacted by these fixes, and I/O performance is maximized. 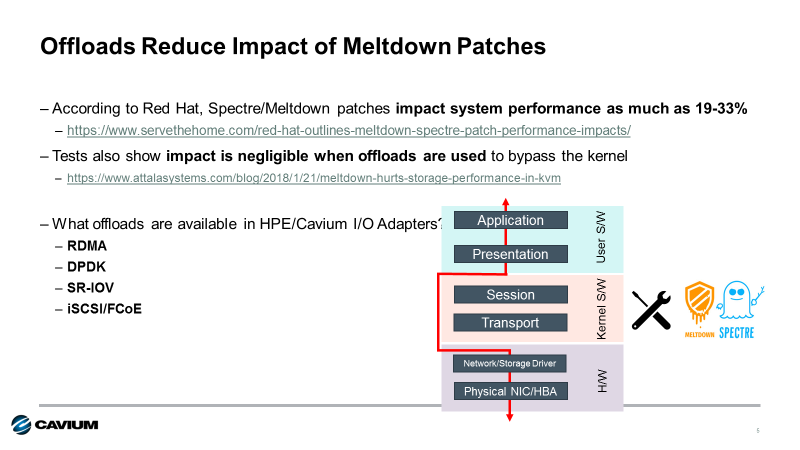 Finally, intelligent I/O can play a role in reducing cost and complexity and optimizing performance in virtual server environments. Some intelligent I/O adapters have port virtualization capabilities. Cavium Fibre Channel HBAs implement N-port ID Virtualization, or NPIV, to allow a single Fibre Channel port appear as multiple virtual Fibre Channel adapters to the hypervisor. For Cavium FastLinQ Ethernet Adapters, Network Partitioning, or NPAR, is utilized to provide similar capability for Ethernet connections. Up to eight independent connections can be presented to the host O/S making a single dual-port adapter look like 16 NICs to the operating system. Each virtual connection can be set to specific bandwidth and priority settings, providing full quality of service per connection. 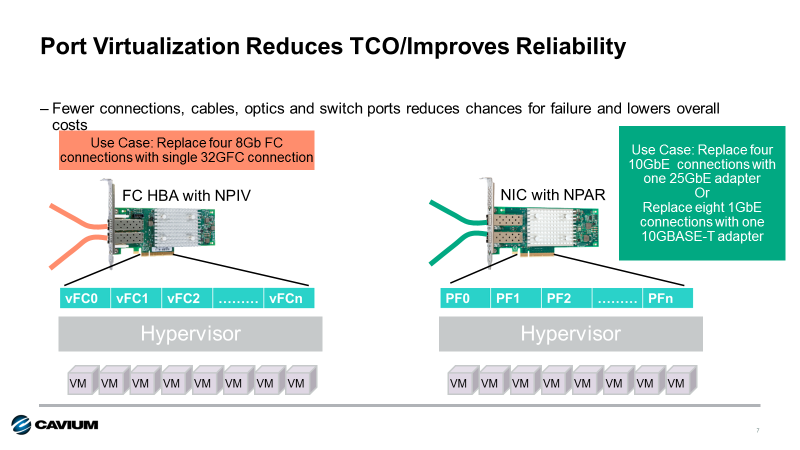 At HPE, there are more than fifty 10Gb-100GbE Ethernet adapters to choose from across the HPE ProLiant, Apollo, BladeSystem and HPE Synergy server portfolios. That’s a lot of documentation to read and compare. Cavium is proud to be a supplier of eighteen of these Ethernet adapters, and we’ve created a handy quick reference guide to highlight which of these offloads and virtualization features are supported on which adapters. View the complete Cavium HPE Ethernet Adapter Quick Reference guide here.

For Fibre Channel HBAs, there are fewer choices (only nineteen), but we make a quick reference document available for our HBA offerings at HPE as well. You can view the Fibre Channel HBA Quick Reference here.

In summary, when configuring HPE servers, think twice before selecting your I/O device. Choose an Intelligent I/O Adapter like those from HPE and Cavium. Cavium provides the broadest portfolio of intelligent Ethernet and Fibre Channel adapters for HPE Gen9 and Gen10 Servers and they support most, if not all, of the features mentioned in this blog.  The best news is that the HPE/Cavium adapters are offered at the same or lower price than other products with fewer features. That means with HPE and Cavium I/O, you get more for less, and it just works too!

Todd Owens
Marvell Field Marketing Manager
Intelligent I/O matters!
0 Kudos
Reply
The opinions expressed above are the personal opinions of the authors, not of Hewlett Packard Enterprise. By using this site, you accept the Terms of Use and Rules of Participation.