Part 5: To wrap up our five-part blog series, we focus on pay-per-use consumption models and the evolving dynamics driving to Hybrid IT. 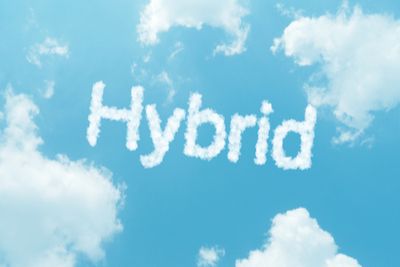 We introduce price-performance with agility as a key topic that must be considered in any Hybrid Cloud strategy.  You can download the complete technical white paper here: HPE On-Prem vs. AWS

The rise of the public cloud significantly disrupted the traditional IT model by offering these new capabilities of pay-per-use: no upfront payments, speed of deployment, the ability to shift capital expenses to operational expenses, the promise of better utilization rates, and the ability to dismantle a setup and walk away from it without penalty. In fact, we leveraged these very benefits for deployment of the AWS test environment to accomplish this study.

In this blog series so far, we compared TCO, pure performance and price-performance. The comparisons show that for cloud-scale advanced analytics workloads, AWS comes with higher TCO, lower workload throughput and higher overall price-performance (lower is better) than HPE on-prem. This study is intended to support multi-cloud planning and as a result, it has consistently taken a conservative approach to the price-performance factors.

One question we frequently hear: Have the enterprises, who migrated to public cloud, realized any downsides to their public cloud migration and what are their future plans?

A recent report by IDC on how Cloud Repatriation Accelerate 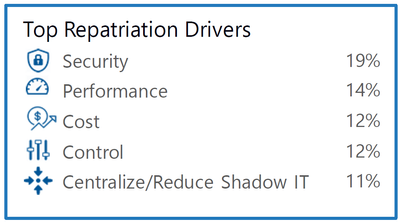 IDC: Cloud Repatriation Accelerates in a Multi-Cloud World August, 2018s in a Multi-Cloud World*indicates that over the next two years survey respondents plan to repatriate an average of 50% of their existing public cloud applications to on-prem private cloud, hosted private cloud, or on-prem non-cloud. According to IDC’s survey, the key repatriation drivers are security, performance, cost, control and centralization/shadow IT reduction.

As we discussed in Part 4, a major part of price-performance efficiency depends on the ability to control physical infrastructure, which is not possible with public cloud deployments like AWS.  Enterprises are recognizing this dependency for certain applications in their portfolios. However, flexible consumption alternatives for on-prem private cloud deployments are now also required from infrastructure providers to play in the market today and in the future.

Enterprise applications that stay or move back on-prem due to the need for increased control over the underlying physical infrastructure, now also require agile, flexible consumption alternatives like those available with public cloud deployments. In the study, we modeled three scenarios involving different consumption requirements. Each scenario establishes a varying workload throughput requirement over time and we modeled the infrastructure required to meet those throughput requirements for both HPE on-prem and AWS public cloud.

The HPE GreenLake Flex Capacity option provides expansion and contraction by carrying an on-prem reserve buffer that is billed only while it is in use. The amount of reserved buffer that is used costs the same as the committed level, so there are no cost premiums to scale up as with AWS on demand. HPE GreenLake takes on the risks so that infrastructure is ready when it is needed.

For Scenario 3, we generated a use case for throughput demand. Then we compared HPE GreenLake Flex Capacity to AWS Reserved plus on-demand instances, as you can see in the figure below.

Bear in mind, the throughput service level requirements specify the infrastructure to be deployed and as we know from this study, not all nodes or instances perform the same. Understanding the performance of each node or instance plays a significant role in understanding the price-performance of the entire set of deployments. Since the GreenLake Flex Capacity infrastructure is operated on-prem, all of the benefits of enhanced control apply, including the significant performance advantage.

The figure directly above shows the weekly costs for Scenario 3. To meet the throughput service-level requirement on a week-by-week basis, the cost variance is much wider for the AWS infrastructure as it requires the use of some AWS on-demand instances which are significantly more expensive than AWS reserved instances.

The weekly cost to support the throughput requirement of this workload over a one-year period, HPE Greenlake Flex Capacity was on average one-third the cost of the AWS solution. This lower weekly cost is achieved while providing the agility of pay-per-use and the enhanced control with on-prem placement.

With the introduction of the HPE GreenLake Hybrid Cloud, centralized cloud operations are now possible from HPE Pointnext that span both on-prem and off-prem clouds to deliver the same consumption experience no matter where your workloads are running.

Price-performance and other control factors are key workload placement decision points for maximizing desired business outcomes in Hybrid Cloud strategies. We hope this groundbreaking study and analysis illuminates these factors in your planning.