HPE Synergy's composable infrastructure abstracts your data center resources, so you can manage them all from one place—whether they're physical, virtualized, or containerized. 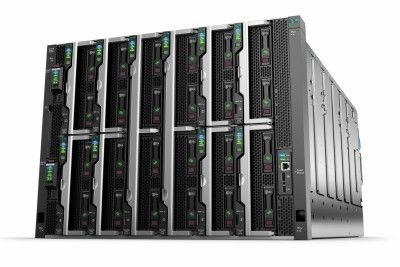 IT's role is not what it once was—you now have to push assets to do and be more, often on tighter timelines, without more staff. That's because today's digital transformation requires you to be agile. At a moment's notice, you must be able to run any workload, on premises or in the cloud.

You've had to adapt to this new paradigm by looking for ways to more efficiently deploy and manage resources, often turning to more abstract environments. Data centers that employ software-defined intelligence (SDI) are essential to that pursuit. HPE perfects SDI through composable infrastructure, empowering you to manage infrastructure as code, reduce your time-to-market rate, and free up your IT team's time.

What is composable infrastructure?

HPE recognizes that you'll need the capability to manage resources, rather than devices, to keep up with business demands. That's where the idea of composability comes in. Composable infrastructure is a software-defined architecture in which compute, networking, and storage can be dynamically assigned to meet the needs of any workload or application.

What makes composable different from other software-defined architectures is that it allows you to manage physical workloads and containerized workloads in exactly the same way as virtualized workloads. This means that rather than having to go into the data center, stand up a new server physically, and add memory or drives, you can do everything through a web-based interface.

Since the infrastructure abstracts storage, compute, and networking from their physical locations, you can access them online and optimize them through a Unified API. Being able to do everything through this central control can save you substantial time.

Composable infrastructure also integrates with automation tools that you may already use, such as Chef, which turns your infrastructure into code to make configurations more testable, portable, and auditable; and Puppet, which utilizes a model-driven approach that doesn't require extensive programming knowledge to master. The platform can also accommodate virtual machines, containers, and even physical server workloads, thereby allowing you to run nearly any workload.

On the quest for agility, HPE designed a composable infrastructure platform to bridge traditional IT and the cloud, HPE Synergy. Early adopters of the platform are already reaping significant efficiency benefits. Bechtle Hosting & Operations enabled self-service VM deployment and reduced provisioning from nine hours to 55 minutes by adopting automated processes and composable computing, according to HPE.

So how does it work? HPE Synergy is not a radical change from c-Class; rather, it enables additional functionality. With HPE Synergy, you still see computer blades, fabric modules, and storage, but HPE has made all of those things more usable and practical. For example, HPE Synergy's blades architecture houses multiple server modules in a single chassis. And HPE's Unified API saves time by automating management tasks such as OS deployment, fabric connectivity, and SAN connectivity.

Bringing it all together is HPE OneView, the web-based interface that allows you to manage all of your data center resources as code. There are two appliances built into the frame that provide the intelligence. The first is Composer, an embedded HPE OneView appliance that does all of the monitoring and management. It gathers information from each frame and then provides a library of profiles and templates, as well as an inventory of all the resources available.

Then there's the optional Image Streamer, which takes it a step further and provisions the software layers, enabling the creation of a library of golden images. Snap off a clone of that image anytime you need a new server; when you boot that server up, you're actually booting into a running instance of the application and operating system. Instead of having to go through the full boot process and actually loading that image onto the particular piece of hardware, it's hosted on Image Streamer.

With Image Streamer, you can run completely stateless. Since all of the server personality resides with the image, you can move it from one piece of hardware to another. This gives you a high level of flexibility when assembling various components and operating environments.

Why SDI and automation are difference-makers

A composable infrastructure like HPE Synergy enables you to overcome the operational inefficiencies that exist in many data centers today. It's likely that you have some mission-critical workloads running on physical hardware, while other workloads run on virtual hardware. The problem with this situation is that you're stuck managing two completely separate environments, in two very different ways. This approach is not only inefficient, but also leads to increased cost and complexity.

A software-defined data center, on the other hand, consolidates the physical and virtual environments, allowing you to collectively manage them through a common interface, such as HPE OneView. Because software-defined solutions abstract the underlying hardware, you can run newly provisioned workloads in the way that makes the most sense for that particular workload. Further, with HPE Synergy all of your workloads can run on a single platform, even if those workloads have greatly differing needs.

Better still, HPE Synergy lets you easily automate the provisioning of new workloads. With the Unified API, you can write scripts that automate mundane tasks—so you only ever have to do them once. Automation decreases your time-to-deployment rate, while eliminating the possibility of human error. The end result: Your organization becomes more agile and competitive.

The flexibility of HPE Synergy has already allowed genomics research institute HudsonAlpha to achieve a 43 percent reduction in hardware and maintenance costs, 94 percent faster delivery of compute resources, and 35 percent less server-related help desk work. As your business puts more demands on your IT department, the benefits of automation and composable computing could save you and your team money, headaches and vital time.

Check out how HPE Synergy stacks up and stands out as you plan your IT strategy.