Even Nutanix sees the future as composable… and they’re right!

Recently, I was scrolling through my twitter feed and I noticed a Nutanix tweet pointing to an article on TheNextPlatorm.com titled, The Evolution of Hyperconverged Storage to Composable Systems. The article discusses the evolution and growth of hyperconverged infrastructure (HCI) as a category, and details the future of HCI as moving toward composability. The article’s image features HPE Synergy, the first platform built from the ground up for composable infrastructure.  What I found interesting was that the Nutanix tweet stated, “The evolution is upon us. @TheNextPlatform examines how hyperconverged storage is evolving towards composable systems”. 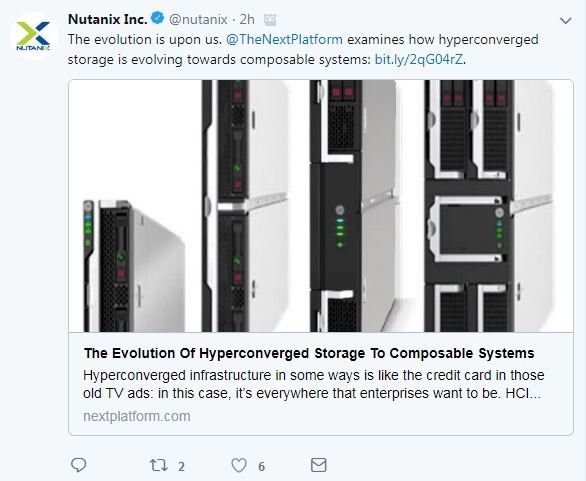 Nutanix is right, and I couldn’t agree more--the evolution of hyperconverged storage is composable. As businesses evolve and grow beyond hyperconvergence, composable infrastructure helps IT cuts costs, increases storage for all workloads, and improves networking -- while accelerating and simplifying everything.  Here are three ways:

2. Composable storage provides flexibility and simplicity for all workloads

The network interconnect is typically one of the biggest headaches for IT organizations to manage. To maintain workload performance, most customers will over provision their resources, which increases cost.  With composable infrastructure, you can dynamically change network allocation and bandwidth to meet your needs.

For example, HPE Synergy is an enterprise-grade solution built on industry standards that can easily integrate into existing heterogeneous data centers and connect seamlessly to existing networks and SANs. It abstracts away operational minutia, replacing it with high-level, automated operations.  Change operations such as updating firmware, adding additional storage to a service, or modifying network connectivity are automatically implemented via a template, significantly reducing manual interaction and human error.  IT can configure the entire infrastructure for development, testing, and production environments using one interface and implemented in one simple step.

Today HPE customers are using both hyperconverged infrastructure (HCI) and composable infrastructure to achieve more flexibility with more cost effective results, both at the core of their data center and at the edge of their business.  One example of this is an international bank that has deployed HCI and composable infrastructure. These combined technologies provide compelling functionality, workload consolidation, and simplified IT operations. Using HPE OneView, HPE SimpliVity, and HPE Synergy, this bank is improving its IT infrastructure across its entire business. Benefits result in simplified IT ops management, a smaller data center footprint, workload consolidation, and enhanced business agility. These solutions are setting this bank apart, letting them offer a growing number of new digital services that improve their customers banking experience.

Yes, Nutanix, the future is composable

I don’t always agree with Nutanix, but on this point, we are in complete agreement. The evolution of hybrid IT is upon us, and composable infrastructure is leading the way.