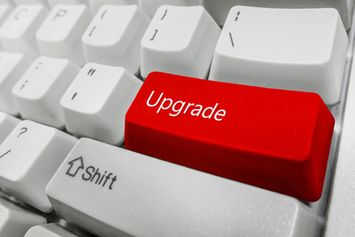 the right time for organizations to upgrade.

However, many small businesses are hesitating to complete this important upgrade because, in many cases, it also requires completing server upgrades. Windows Server 2019 is designed to run on modernized hardware, and small businesses often want to eke out as many years of life as they can from their current hardware investments. Failing to upgrade, though, can mean losing much more money in the long run.

Here's why making server upgrades for Windows is the economical choice.

The problem faced by those who refuse to make server upgrades for Windows is twofold: first, Microsoft is dropping support for Windows Server 2008 and 2008 R2 on January 15, 2020. This means that there will be no more security updates, feature updates, bug fixes, or free security patches. Continuing to run the OS after that date is an enormous cybersecurity risk.

The other side of the issue lies with your applications. Once an OS is no longer supported by the OS manufacturer, most vendors stop supporting their apps on that OS. If you experience issues with apps that run on Windows Server 2008, you're most likely on your own.

The cost-saving benefits of upgrading

On the other hand, upgrading to Windows Server 2019 gives you more built-in cybersecurity protection than was ever possible in the 2008 era. Modernizing your servers also has cost-saving benefits. It's a false economy to run old hardware and think you're saving money; staying on hardware that's out of date can be orders of magnitude more expensive.

One area in which you'll be able to cut costs is software licensing. Older systems are very slow relative to modern servers; you need a virtual ton of processor cores to get them to perform at the necessary level. Software writers realized this and began licensing software based on the number of processor cores needed, making their products more expensive for you to run. Modern processors are multithreaded and require fewer individual processor cores to work more efficiently, so upgrading to a modern server gives you the opportunity to reduce your software license costs significantly.

Another example lies in containers. The industry is moving toward virtualization that uses very lightweight containers instead of more taxing virtual machines (VMs). Suppose you have 15 servers now because you can only run so many VMs per physical machine. With a modern OS on modern hardware, you can use containers to run hundreds of apps on a physical server—meaning you could get away with as few as six newer servers. That's a lot fewer OS and app licenses to buy.

Moving toward the cloud

Microsoft has been encouraging organizations to move all the workloads they currently have on Windows Server 2008 to Microsoft Azure, its public cloud service. However, running VMs on Azure takes an enormous amount of in-house expertise that many SMBs don't have. The maintenance and configuration that normally occur automatically on public cloud services don't just happen with VMs; it's manual management all the way. A full migration to Azure also wouldn't solve your app vendor support problems.

If the cloud is on your horizon, the best path forward is to modernize on the current version of Windows Server. Windows Server 2019 has tons of back-end, built-in support for Azure, including wizards and control panels that streamline management and deployment. Those features, combined with best-in-class servers, can pave the way for an effective hybrid cloud approach that's tailored to your business's needs.

Not upgrading is no longer an option

Many organizations didn't upgrade over the past decade because they didn't want to leave their beloved Windows Server 2008. Now, there's no longer another option. The good news is that there's a whole generation of technology advancements to take advantage of now, and HPE offers a completely reliable and protected solution that offers superb support for your Windows Server 2019 deployments.

Watch this video and discover more about upgrading to Windows Server 2019 on HPE Gen10 servers.