Let's get technical and learn about HPE Serviceguard for Linux and what makes this the ideal high availability and disaster recovery solution for any customer deploying SAP HANA as a mission-critical database. 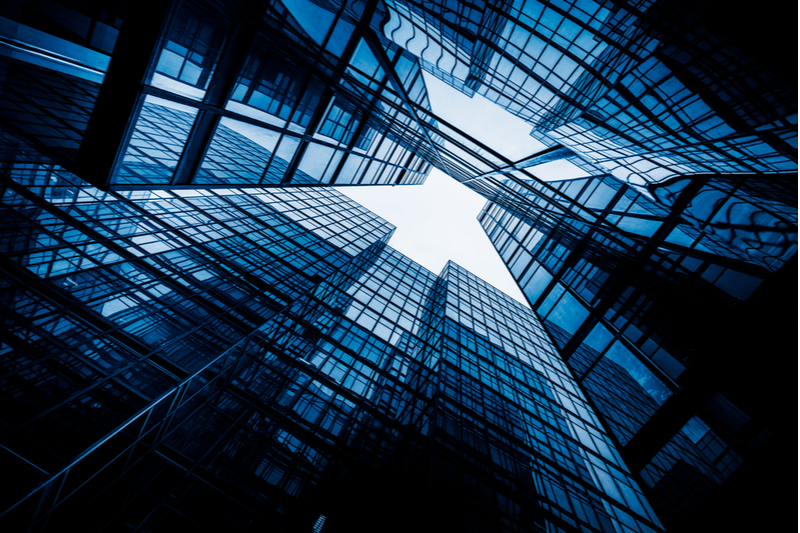 In the past ten years, SAP HANA has become a defacto database running behind most SAP Applications. Customers see SAP HANA as a critical component in their SAP Applications landscape. That's why it important that every possible care is taken to make sure it is highly available – and in case it's down, it can be brought up in the shortest amount of time without any loss of data. Typically automatic cluster management for SAP HANA database, seamless management of large number of database instances, or containers become important. What's more, customers need to consider host-based system replication from primary site to a secondary site.

High availability as a concept means deploying an application, a database or a component in a redundant way to make sure that even if a component is down, a standby can take over in a very short time – with no noticeable downtime. This is where HPE Serviceguard for Linux (SGLX) comes in.

HPE Serviceguard for Linux (SGLX) is a clustering software that can seamlessly manage Linux clusters and with least amount of administrator intervention. It is an application high availability (HA) and disaster recovery (DR) clustering solution that increases up-time for mission-critical applications by protecting them from a multitude of infrastructure and application faults across physical or virtual environments over any distance. It reduces the impact of unplanned downtime with no compromise on data integrity and performance. It also helps achieve near-zero planned downtime for maintenance.

Now consider SGLX in context of SAP HANA with a focus on Smart Quorum Server and HPE Serviceguard for Linux extension for SAP HANA (SGeSAP).

The Serviceguard Quorum Server provides arbitration services for Serviceguard clusters when a cluster partition is discovered. The Serviceguard Smart Quorum is HANA-aware and makes sure that the primary HANA system continues to remain operational when it gets cut off from its secondary. The Smart Quorum values HANA primaries over secondaries. It is thus superior to common majority quorum mechanisms. Smart Quorum enables configurations of scale-out clusters that co-exist with one or more HANA standby nodes per site.

Here is an explanation of common failure scenarios and how Serviceguard with SGeSAP responds.

Database failure – In this case there is a primary SAP HANA database running at the PROD site and it is being replicated to another SAP HANA database at the NEAR DR site. Once HPE Serviceguard notices a primary database service failure at the PROD site, it brings up the secondary database from the NEAR DR site, and automatically promotes it to be the new primary database. This helps to keep the application running without any downtime. 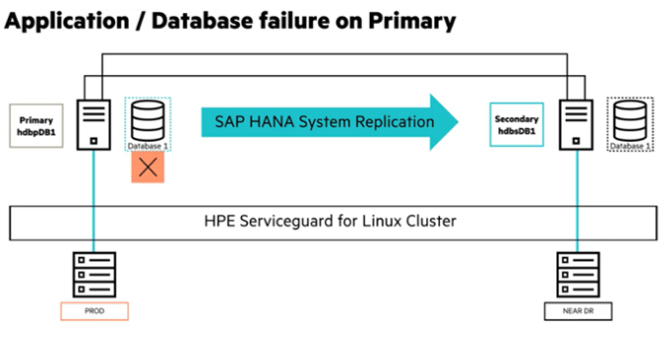 Double failure handling – As mentioned earlier HPE Serviceguard monitors SAP HANA System Replication and if it notices that System Replication has failed, it marks the secondary node as ineligible for promotion to primary. In this situation if there is another failure at the primary node i.e. database down, then Serviceguard does not failover to the secondary node since it is ineligible for promotion. Serviceguard now tries to restart the database at the primary node itself.

Split-brain failures – Split brain is a typical situation in clusters wherein a cluster has been fragmented and there are more than one surviving segments requesting Quorum. HPE Serviceguard deploys a patented Smart Quorum technology to handle such situations. Serviceguard grants the quorum to the requestor that has the preferred workload running and denies the quorum to the secondary or DR site. 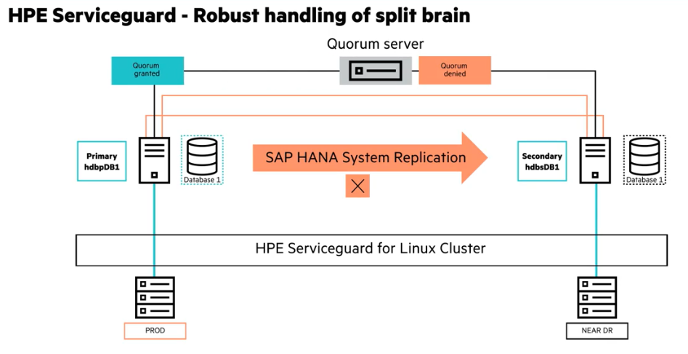 A quick summary of some other useful features

Serviceguard Quarantine – Serviceguard can be configured to cut off a primary production HANA instance from its networks immediately after a failure has been detected, such as a HANA indexserver process abortion. Using Quarantine, a failover can trigger remote continuation of production faster than a local restart would be possible. Production use can continue in parallel while the failing instance is still being halted and cleaned up by Serviceguard on the original production hardware. Failover is faster and more reliable due to Quarantine. The failing instance gets “not frozen” in an undefined state, but shuts down regularly or gets cleaned out by Serviceguard. Its host(s) get automatically converted by Serviceguard to serve as working secondary HANA instance. This automatically creates a new failover target as soon as possible. Server reboots are not necessary in case of software failures.

Serviceguard Safesync blocks – To explain this, let us assume that at first there is a database failure at the secondary site or a replication network outage between primary and secondary. After a short delay, even a primary instance in HANA sync replication mode will continue to operate. It commits additional data changes to the application layer that are not reflected in the secondary data. Serviceguard will subsequently make sure that neither an automated failover nor a cluster or server reboot situation or an administration human error triggers such outdated secondary database contents to serve as production system data. Without Safesync, a failover can easily lead to silent data loss.

HPE Serviceguard for Linux can protect and recover a SAP HANA database from all kinds of potential failures that can occur in a large environment automatically – and without compromising data integrity. This is an ideal high availability and disaster recovery solution for any customer deploying SAP HANA as a mission-critical database.

To learn more about HPE Serviceguard for Linux, watch the demo - and also check ou the HPE Reference Architectures.

Markus Ertl is a master product architect, working onsite at SAP headquarters in Germany. For close to a quarter of a century, he had driven the development of value-add software solutions for HPE in various SAP contexts – and he designs the SAP-related feature set for HPE Serviceguard.

Sanjay has two decades of experience in the IT industry. Currently, he is a Solutions Architect with the HPE Solution Engineering Team – SAP HANA, which is focused on creating solutions and reference architectures for enterprise use cases around SAP and/or SAP HANA technologies.