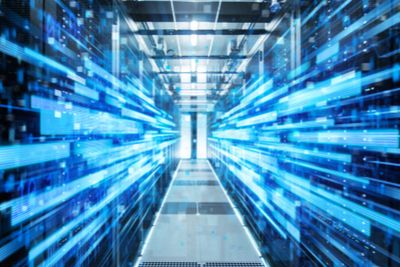 Dutch healthcare collaborative, the Carante Groep, has the technology it needs to ensure its workers have fast, reliable access to patient information as well as a host of applications and services, thanks to HPE Synergy. This powerful, software-defined solution from Hewlett Packard Enterprise (HPE) helps the healthcare group deliver high-quality care to the 20,000 elderly, mentally disabled, and physically challenged people in its 13 regional facilities throughout the Netherlands.

But the Carante Groep couldn't always deliver that ease of access. Its old model of distributed IT services and legacy data centers limited its organizational capabilities—limits that would have become even more constricting as the organization sought to use emerging technologies to increase its caregivers' efficiency and efficacy.

Carante Groep executives knew they had to update their infrastructure to adopt those emerging technologies. HPE Synergy gave them the tools they needed to evolve from their legacy system.

Until recently, the Carante Groep struggled with a complex legacy system.

Each affiliate of this Netherlands-based nonprofit cooperative had its own IT services, with its corporate data center configured with HPE blades and storage. Access to applications, services, and information was slow, which impacted patient services, and it prevented caregivers and administrators from performing at peak capacity. The Carante Groep IT team determined that the best path forward was to build two software-defined data centers, leveraging HPE Synergy composable infrastructure. They recognized the state-of-the-art technology—which combines compute, storage, and networking—would deliver immediate benefits and long-term advantages for all of their stakeholders.

"In HPE Synergy we see an architecture that will give us much more flexibility," said Carante Groep project leader Martin Haaksema. "It makes it easy for us to virtualize not just the compute, but also storage and networking to build a completely software-defined data center."

Preparing for the future

To ensure a smooth transition, the Carante Groep rolled-out its new system in phases. It first deployed the Synergy platform in one of two new active data centers, where the new platform shared the load with one of the organization's legacy data centers.

The Carante Groep leveraged the expertise of HPE Pointnext Services to provide installation and startup services. This helped the Carante Groep shift its resources to the higher-value work of identifying how to maximize the benefits of the new infrastructure. "HPE Installation and Startup Services saved us a lot of time we would otherwise have consumed ourselves unboxing, mounting, and understanding the systems," said Carante Groep IT consultant Andre van de Werken.

After the deployment of Synergy is complete, the Carante Groep will have two new colocation centers, each with nine HPE Synergy frames supporting its entire business. Approximately 80 percent of the Carante Groep's workloads will run on-premises; the remainder will run in the cloud. Its infrastructure will be more than 99 percent virtualized with VMware, and it will serve about 2,000 virtual desktops to start. (It's expected to eventually serve 4,000.) The platform will give caregivers, administrators, and staff access to the services and applications they need to deliver effective and efficient care to thousands of people who entrust their lives to the organization.

HPE Synergy delivers a number of key benefits to the Carante Groep.

It brings increased simplicity to the organization's IT stack, as the unified composable infrastructure can run all of the organization's applications and workloads simultaneously. Synergy also delivers flexibility, allowing the Carante Groep to take applications and workloads to the cloud whenever desired without any need for reconfiguration. This enables the collaborative to easily scale as needed, giving them more time to develop and deliver transformative capabilities to the rest of the organization instead of focusing primarily on hardware requirements. In turn, this adaptive ability has made it possible for the Carante Groep's IT staff to be even more responsive to caregivers and patient care, as well as the organization's strategic requirements.

"There's no longer the need for all our IT staff to know every detail about the hardware," Haaksema said. "We have just a couple of engineers managing the infrastructure, so all the other people can concentrate on the applications and services our caregivers need. It makes our team very agile and enables us to respond to the needs of our caregivers much faster."

The HPE OneView management tool gives the Carante Groep's IT team a single interface to see the entire composable infrastructure. This gives the team insights into resource utilization, allowing them to better forecast capacity requirements and manage fluid resource pools. "From a management perspective, we couldn't do the amount of work we're doing and deliver the number of services our caregivers need without a proper tool like HPE OneView," Haaksema said. "We'd need at least two, three, maybe four extra engineers just to keep up with the business."

Simply put, HPE Synergy delivers agility, flexibility, and security, a critically important benefit given the high level of sensitive data the Carante Groep holds on behalf of their patients.

Ready for the future

The Carante Groep has already seen how Synergy infrastructure can support its growing use of newer technologies. Currently, it deploys e-learning systems and instructional streaming videos to educate caregivers, and it can leverage the Skype video conferencing platform to connect caregivers with remote medical specialists. In addition to these immediate benefits, the Carante Groep can count on HPE Synergy to continue to provide the flexibility to run new digital services and scale with future technologies as they are engineered, tested, and mature.

Moving forward, HPE Synergy has the capacity to support the organization's expanding use of connected devices to build a robust internet of things (IoT) ecosystem to monitor and analyze client needs. And because it supports the full spectrum of emerging technologies, it will help transform the Carante Groep into a fully digital organization.

"By moving to HPE Synergy composable infrastructure," van de Werken said, "we don't have to worry about the hardware and can just focus on delivering the best services possible for our caregivers and their clients."