As hyperconverged storage evolves toward composable, HPE Synergy is leading the way.

Nutanix tweeted its support that “hyperconverged storage is evolving toward composable systems” as published by TheNextPlatform on April 12, 2018. 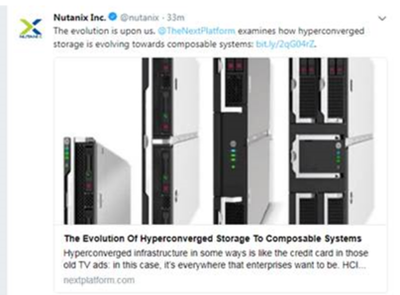 Learn what industry experts, analysts and customers are saying about HPE Synergy

In this article entitled The Evolution of Hyperconverged Storage to Composable Systems, the author discusses “as much attention as hyperconverged infrastructure is getting, it’s a stepping stone toward composable infrastructure.”  He goes on to state that “companies like TidalScale, HTBase and Liqid also are in the market, but HPE gets the most attention.”

In this recent analyst white paper entitled The Software-Defined Data Center Comes of Age, Forrester concludes that only one product legitimately meets its definition of a Composable Infrastructure System: HPE Synergy.

Today, customers are experiencing the benefits of a composable infrastructure by deploying HPE Synergy. Watch this video to see how Accenture is using HPE Synergy to drive IT performance and agility.

And here is some good advice offered by a solutions engineer at a large tech provider: “There's no other solution that's similar. HPE Synergy is above and beyond anything else any of the competitors have on the market. If you're researching this, you're going down the right path. The best thing to do is actually get hands-on and get a demo. Contact HPE and start taking a look at the advance features and start looking at how your applications and demands are going to be met.”