The state of the industry: server storage 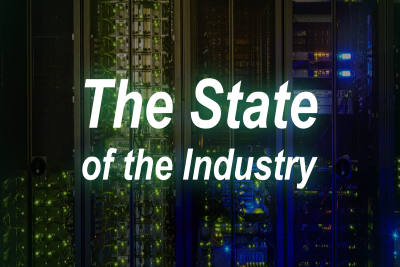 Selective pressure—it’s what sent the fish scurrying on land and spurred the dinosaurs to take flight. It’s also why I suddenly have to shell out a thousand dollars so my daughter can animate emoji’s on her new iPhone. Selective pressure drives all forms evolution, and nothing has evolved faster than humanity’s need for data storage.

Consider this: between the creation of earth and the year 2003, humans produced five exabytes of data. Total. By 2013, we were creating five exabytes of data (that’s five billion gigabytes) every day. That number is only set to grow as enterprises tap the potential of Big Data and Artificial Intelligence. The technologies that will define business in 2030 will require reading and writing more data—and doing so faster—than ever before.

So it’s natural that the requirements and preferences of IT teams in enterprises around the world are rapidly changing to keep up. Companies are only just starting to realize the growth potential of the cloud. That kind of digital transformation puts selective pressure on the performance, scalability, reliability, and security of servers. Much of the server tech that ran the world in 2010 is already, or is soon-to-be, obsolete, even as new tech is set to replace it.

Often leveraging a mix of storage arrays, IT pros use Direct Attached Storage (DAS) for critical, customer-facing workloads. That’s because DAS delivers incredibly high performance, letting you read and write data rapidly and efficiently. The storage array attaches directly to the server, removing latency between applications and data. DAS is also friendlier to the IT budget, so organizations that are wary of going off-premise are likely to keep their DAS ecosystem as long as possible.

“The customer facing technology…that’s the stuff that’ll get you in trouble quick. If it’s not working, customers will go to another [company], so we keep it in our DAS.”

Other storage arrays are utilized primarily for their greater ease of data recovery. It’s common to work Network Attached Storage (NAS) and Storage Array Networks (SAN) into server environments for workloads that deal in highly valued data. For instance, NAS supports higher, multi-drive workloads and connects multiple users in an environment while SAN delivers comparable performance to DAS, plus greater flexibility and reliability.

So while a third of IT pros expect their use of NAS and SAN to increase over the next two years, that won’t come at the expense of DAS. Simply put, the cost-effectiveness and speed of DAS will keep it highly relevant in storage ecosystems for years to come.

Read more about choosing the right storage array for your environment here. The Year of DAS: Deciphering Your Ideal Storage Ecosystem)

The vast majority—72%—of organizations surveyed use HDDs to meet their server storage needs, and more than half of them use HDDs as their primary server boot drive. Hard drives are reliable and offer vastly more capacity than their solid state counterparts. That’s why you’ll find that about half of common enterprise workloads run on HDDs, while the other half split the load between HDDs and SSDs.

As IT pros upgrade their companies’ server platforms, however, more than half expect to increase their usage of SSDs. Still, opinions are mixed when it comes to the importance of the type of drive to the upgrade process. Some find HDDs and SSDs important due to their impact on capacity and speed, while others place more importance on other storage environments that are more challenging to upgrade (e.g., SAN).

“We will go to SSDs for boot as we move forward for the performance aspect.”

Already, a significant portion (44%) of surveyed orgs use SAS/SATA SSDs for boot operations, and mid-sized orgs are expected to increase their usage of these drives over the next few years. With a typical lifecycle of 3-5 years, the time may be approaching to switch out your drives.

Read more about which type of drive will suit your business needs here. Old School vs. New School – When Should You Choose Hard Drives vs. SSDs?

RAID, or “Redundant Array of Independent Disks,” is crucial to protecting highly valued data. In fact, the biggest concerns among IT pros when it comes to workloads are security, data loss, and running out of storage. Configuring the best RAID level for your servers will help mitigate the threat of data loss.

“Redundancy is really important to us, so we always buy systems with redundant power, controllers, RAID. We protect ourselves as much as we can.”

Currently, RAID levels 5 & 10 are the most common among orgs using RAID. Almost all of them are using hardware RAID because it is more cost-effective and performs better than software RAID (while those using software RAID choose to use it with Windows). Most orgs are using SAS and SATA interfaces for RAID, and several IT pros surveyed use 100% hard drives with 2-3 controllers and 3-12 drives.

Read more about the technology behind RAID, and how to choose which level is best for your controllers here. What Are RAID Levels, and Which Are Best For You

The number one concern for IT pros isn’t very surprising: security. And when we talk about server security, we’re mostly talking about encryption. 63% of orgs surveyed encrypt their server storage solutions, driven heavily by large enterprises. Surprisingly, nearly half (47%) of mid-sized orgs do not currently place an emphasis on encrypting server storage solutions. It may be time to rethink that logic.

With the adoption of new technologies and methodologies like hybrid IT, the Internet of Things, and mobile networks, businesses are open to more categories of cybersecurity threats than ever. Traditionally, companies have relied on Self Encrypting Drives (SEDs) to keep their data secure. And SEDs are great when you don’t have too many drives. However, the cost adds up when you have a whole data center to encrypt, and SEDs only encrypt data at rest once it reaches the drive.

“Security is a big concern and a real threat as well.”

30% of surveyed IT pros use SEDs, with another 33% using third-party software. However, the big up-and-comer in this space is Controller Based Encryption (CBE). Only 25% of IT pros use CBE currently, but that’s likely due to the fact that HPE is the only company today that features it. CBE encrypts all data as soon as it hits the controller, protecting your data from the PCIe bus all the way to the drive, including cables and the flash-backed write cache. Think of it as an extra level of protection for your most sensitive data.

Top Concerns for IT Pros

So that’s the server storage industry in a nutshell. From types of drives to storage arrays, there’s a whole lot of decisions that IT teams have to make in the coming years to modernize and fortify their server environments. The greatest challenges they’ll face are high costs and concerns about scalability. Fortunately, HPE can help any sized organization craft the perfect environment that’s future proof, cybercriminal-thwarting, and highly evolved. With more exabytes of data created each and every day, you’ll want to make sure your server storage solution is sound.