I upgraded the IM, and after that I did the same with the command view to version 3.9.02, and almost everything works.

Whe I try to save the current configuration through the CVTL Web GUI, it appears that it is doing something, but after some time (several minutes) it gives me an error about the task. The error is this one: 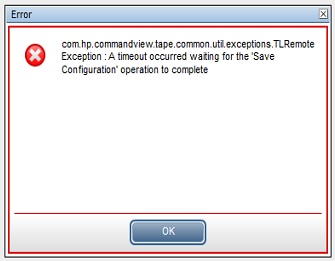 If I do it through the telnet connection, it works fine.

Prior to this updates, I had problems also retrieving the Support Tickets as well as the configuration backup, moving media and rebooting any component.

I have been told a workaround, saying that with the clear station, rebooting the IM should do the trick, but it does not.

I heard about this workaround through an HP engineer.

¿Any clue or thougths?

No idea what's wrong, but meanwhile you can telnet to the IM, do a "save system" and pickup the file via ftp.

Hi Torsten. Thanks for the advice, but I was already aware of that, and I did it so.

I tried to read the configuration backup in the Command View afterwards, but it had nothing.

I had another backup, an older one, and I did the same and I could see all the saved data.

I am strting to beliave that we have something wrong in the IM.

Thanks anyway for the idea.

Could you please connect to CLI and do

The most important configuration info is

Consider to post the 3 commands above, record the bottom 2 for you.

Hi Torsten. Here are the output to the commands you asked:

Well, I haven't any success with this issue so far.

I've tried already removin the library from the Command View, clear de management station from the CLI (again) and even rebooting the library (via the CLI command and also with the button).

So, I opened a case with HP in case the might have more luck with this.

I have another question related to all this.

While I was rebooting the library through the button, I tried to check if the AutoClean was activated and wasn't able actually to see if it was or it wasn't enabled.

Do any of you know the command for checking that in the CLI?

So far with no luck yet.

I am going to change the library network settings in order to get de CVTL server and the library in the same vLAN.

So far, it worked fine with both of them in separated vLANs, but lets see if this do the trick.

Well, I changed the library of vLAN yesterday, and it is now in the same vLAN as the CVTL server.

We don't have timeouts anymore saving the configuration or supporttickets.

So, this was communications issue.

But now, we are experiencing other problem that we are working to solve now.

The vLAN the library is in now, has a lot of servers in it, and there is a lot of broadcast and multicast traffic, and the librabry network controller (10/100) gets saturated (the network and all of the servers are Gigabit Ethernet).

We can manage the library, but the CLI and GUI hangs and comes back often.

So, we are thinking about changing back the library to the old vLAN (it has less traffic as it is the management network), and getting an interface card of the CVTL server configured in the management vLAN and it should work just fine.