Fast Forward with the Right Networking Solution for Your IP Storage

Fast Forward with the Right Networking Solution for Your IP Storage

With that in mind, let’s take a look at networking solutions from HPE and Arista that can help ensure the success of IP storage deployments in enterprise data centers.

Once upon a time, when Ethernet’s top speed was one gigabit per second, debates raged in the networked storage community about the viability of Ethernet as a transport of storage traffic. These debates faded away as 10GbE Ethernet followed by 40GbE and 25/100GbE became a reality driven by the Ethernet economics of scale. Today, enterprises are deploying IP storage in their data centers—and, as I mentioned, you expect networking infrastructure to ensure high availability and high performance of business applications.

From HPE and Arista:  Reliable, agile networks designed with IP storage in mind

Your concerns stem from the fact that storage networks are fragile and require special attention. TCP/IP is a best effort guaranteed delivery protocol that will get congested due to many reasons, including retransmissions, storage devices timing out and Ethernet speeds mismatches. The lack of adequate visibility of networking flows does not help. HPE and Arista have networking solutions that address your concerns and deliver reliable high-performance networking that gracefully handles bursty storage traffic and networking speeds mismatch. HPE and Arista deliver just that giving customers

A closer look: HPE and Arista solutions for IP storage

If you are looking for scalable, agile and automated solutions for your IP storage deployments, then look no further than HPE and Arista and take advantage of easy to deploy and manage solutions with lower TCO. 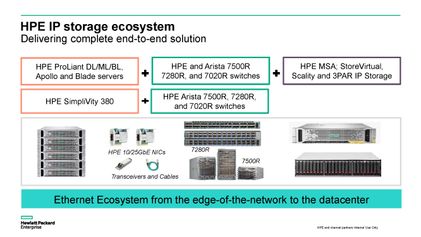 For more information: (will add hyperlinks in final version)