Building out a modern estate requires some key decisions to be made. Ones that impact internal requirements, business needs and competitive advantage.

However, there is often a key comparison that is neglected, the matter of Platform as a Service [PaaS] vs Infrastructure as a Service [IaaS].

While there are guides that also compare the value of SaaS, we think that this battle deserves its own space. Therefore, this guide looks to compare IaaS and PaaS from various perspectives - including features, roadmaps and more.

So, let's get started at the beginning.

Comparing IaaS vs PaaS: The Beginning

When you consider the needs of a modern enterprise, there are many aspects to consider: ranging from business-critical applications to client-facing services.

As such, it is essential to build out an appropriate infrastructure to keep your services operating at their optimum.

However, for lengthy periods, enterprise was restricted to the heavy handedness of IaaS. Equally, this relied on the time, resource and knowledge of stretched internal teams.

These teams were very much siloed away, focused purely on building out the necessary infrastructure which could then be used to roll-out servers and virtual machines.

In addition, there was also a consideration for:

All of this came together to form a bespoke IaaS solution, which, with the years that had gone into it, was well protected.

However, all this pain and focus, which was previously a must, is now losing its competitive advantage.

Having considered the situation, and the limited use of IaaS on a global scale, we are now faced with a new solution – PaaS.

This advantage of cloud computing means that organisations can relinquish focus of their tightly-held, problematic internal controls and consider the option of out-sourcing.

As such, through a limited need for internal infrastructure, this outcome can be achieved by even the smallest of business.

From a resourcing perspective, no longer are enterprises beholden to a ‘superstar’ developer who needs to build out the whole middle layer. They can now use alternative services [PaaS or SaaS] and exploit industry specialist in Microsoft or Amazon.

This means that they can lean on their expertise from a foundational perspective, such that your average developer can become a superstar. Whereby they are using well-written, well-designed, scalable technology in a PaaS service.

Granted, enterprises will have to sweat some existing infrastructure, but this can be phased – as we’ll discuss below.

When you look at how the comparison of IaaS vs PaaS in consideration of scale, the results are very telling.

In the finance sector for example, we are seeing challenger banks who have greenfield sites when it comes to infrastructure. Whereby, through starting afresh, they don’t have the same transitional issues associated with heritage organisations.

At times, this enables them to accelerate beyond the larger, older businesses, which are forced to morph what they currently have.

This capability means that they have greater agility whilst having the equal opportunity to scalable infrastructure. For example, if you look at the mammoth that is AirBnB, they only started with four developers, all of which could be focused on building the right solutions, not the middleware.

As such, with PaaS you can easily transition from a thousand kilobytes to petabyte scale at will, rather than IaaS, whereby you are limited to the size of the environment that you have built.

This scale is married with the convenience of PAYG pricing which is offered by Azure, Google and AWS. Which, through keeping costs low, you can scale up and down as you change technology, freeing up the willingness to innovate.

The need to reduce innovation restrictions is important because the personnel in these types of teams are very much of an iterative mindset.

When it comes to the variety of SQL options, most technical departments are familiar with:

While cloud computing [PaaS] has faced queries around its approach to No-SQL options [Cosmos DB etc.], providers, especially Microsoft Azure, have become equipped to handle these.

Enabling you to move beyond the need to rely on your ever-busy IaaS developers.

This is important because different workloads and business functions will require different latency access to data and read-write scenarios – with Azure PaaS, you have the options to adjust accordingly.

For those considering moving IaaS to the cloud, you can be assured of the performance of PaaS.

In many cases, it will be greater than a traditional on-premises solution, and therefore it is all about selecting the appropriate technology for the right business case.

Moving on from the matter of the various performance related matters, it’s now important to discuss PaaS vs IaaS from a business-driven perspective.

Firstly, as noted before, you must begin with suitable foundational levels, so that when enterprises do scale out, they're in appropriate shape to do so.

Only then can you design around business requirement. Unfortunately, a lot of companies are limited.

Despite having a service/ database, they then must develop from a bottom-up approach. Whereas the correct way of doing it is saying:

This is our business need, how do we address it?

And that’s the kicker, the change in mindset that this brings along means that there is an entirely different conversation at play.

Therefore, you can get the key stakeholders within the business, and the knowledge workers to buy into and sign off on that vision.

At which point, you back fill that with the technology.

Whereby, most businesses are knowledgeable of their model and relevant market shifts. The difficulty they have is integrating their business needs with the technical infrastructure they've got.

We now have the components that go in the middle [PaaS], but one of the difficulties in getting your mind around cloud technology is understanding what component does what.

Having now got to the position whereby you can consider the various features of an Azure PaaS solution, where do you begin?

Start by kicking off with the more-common batch and stream processing, whereby organisations have typically been focused on batch processing.

This normally begins with your data source, for example it might be a CSV ingest of text files. This then needs to be ingested into, normally, a relational database, whereby you conform the data. And that's traditionally ETL [extract, transform, load].

This ultimately is presented to some other business entity or some form of presentation, be it the web, be it internal, be it some business function within an enterprise.

The vast degree of new features has created a dilemma of choices.

For example, there are companies facing high latency of batch loading, in such cases, it's not unheard to have a couple hundred million rows in a file. So, with the time taken to load, to clean, to conform that data could be 10 minutes, a day, or in situations, a few days. Which in circumstances, is far beyond business requirements.

However smaller companies are content owing to their limited scale of data.

But those days are soon becoming a distant memory, whereby the juggernauts can now run a streaming process through various architectures. Providing them with the choice of streaming or batch processing.

But generally, companies are willing to compromise the lack of accuracy in streaming with the value of being real-time.

These considerations are being made across industries, from RedPixie’s IoT health project,WellWatch – to global insurers that we are helping to ingest video data into their streaming analytics. For that latter, our data science team are working on some previously unachievable video analysis. 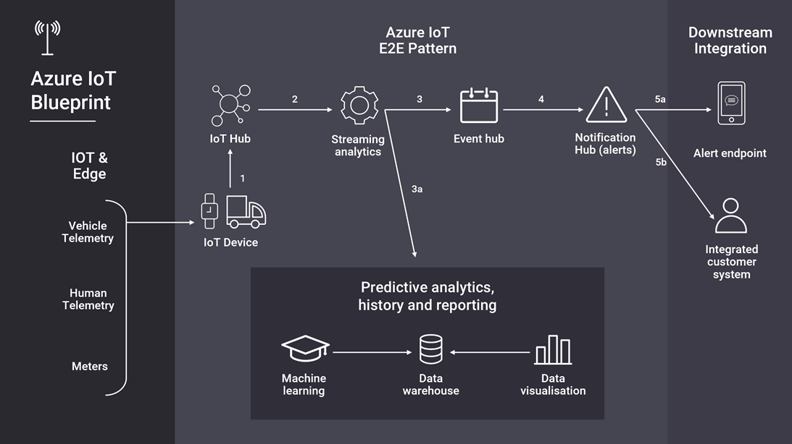 But this all happens in conjunction with many associated components. Such that with WellWatch, we're using Event Hub, which is measuring millions of events per second.

This serving layer can give live, real-time information in life-critical events, which people need to react on.

Looking at these elements against a structured roadmap you start to see a differentiation by company size.

Whereby larger organisations are frequently in a mired position. As such, despite the possibility of elevating their capability internally, they are often looking further afield. Hence the value of a third-party.

Though this isn’t always necessary, such as with smaller companies who already possess great agility, but for those with more legacy, this is sometimes the only base to a successful roadmap.

The conversation of resourcing is best when the business strategy of an organisation is also made transparent. Whereby, only at that point can one start to drill down and match the technologies to that requirement.

Beyond a shift in internal resourcing, one can also see the moves of even the largest cloud providers. Whereby a tipping point has led them to invest more in the cloud technologies than the on-premises technologies.

This rate of change sits across most areas, including:

Looking back to an example two years ago, I was building a Twitter stream, where we analysed tweets using machine learning.

Unfortunately, it was quite a manual process, whereby we used a makeshift streaming function to identify hashtags. We then attempted to identify the sentiment and based on the result, that would then go to a queue in a call centre.

Cognitive services are even a step beyond machine-learning. Essentially, all the training of the machine-learning algorithms has been done by Microsoft. So, whether it be text analytics or otherwise you don't have to train your model to figure out what it is.

It’s out of the box.

But this has now gone a step further, whereby these and other services are interacting with one another, which brings us onto service programming.

To which Azure, and other providers, are now using a snippet of code instead of using large infrastructures. This can run in the cloud wherever, whenever.

For example, you can take one of these functions and deploy an image against an agreed code, which then analyses what's in the picture. And based off the big data which the programme has previously learnt from, it will tell you what object are in that picture.

This could help with all things from the police force, to health, and many other in-between services.

And while this was a difficult challenge just a few years ago, now it can be easily tested. To make this even more appealing, Microsoft can then send that data to an under-utilised server in Singapore, which brings the price massively down.

Hopefully we've showed you the various differences between IaaS and PaaS, whether that be through features, or the manner in which it impacts your teams.