Thank you for taking the time to provide us feedback on HPE Support Center tools and resources.  We are continuously working on simplifying the HPESC portal, all your HPESC feedbacks are getting monitored and will be reported appropriately.

On the product page, you can filter by drivers and software or documentation, or do additional keyword searches within the product-specific results. The product focus is controlled by the product name listed on the left side of the search box.

Note: This is a peer-peer community, to get quick answers on HPESC feedback, you can use usage support form: https://support.hpe.com/hpesc/usageSupport/ or “Feedback” button that’s available on all HPESC pages.

Provided that User Feedback (for sure I speak for myself only) about HPESC Portal functionality was provided but no feedback from HPESC Portal Team was ever received (if any, we received global feedbacks about HPESC Portal basically only indirectly through this peer Community Forum on this thread) there are still operative problems following your suggested example procedure:

Visually it is very difficult to find what one is looking for.

[*] Operating Environment list as it exactly appears as of today, related to example provided, with items in the exact as they appear (numbers between brackets are items referencing to that specific operating environment), note unaggregated listing of VMware:

I need to scroll about 2 minutes to find Vsphere 6.5. Problem: not listed alphabetical, you made a simple "select * from software". Line breaks are badly rendered. VMWare vSphere is invisible in that list:

Now the hits for "Firmware" in that selection:

You can see: There  is no BIOS in that list and hits are not sorted by date (newest first) . Some links are dead (f.e. Online ROM Flash für Smart Array  P220i...)

And what is the meaning of "*RECOMMEND* *REMOVED*" ? Should I remove the software because it is recommend?.

We don't need such trash. We need a portal like this:

from my conservation with HPE  support (case):

please put the old support portal back online. The new portal is crap and useless. I found really nothing.

I wish I could, really!

Thanks for your feedback and suggestions. We're aware of these issues and working to resolve it as quickly as possible. We will update this thread with progress as it’s available.

Another confusing detail is this one:

Suppose a user is brave enough to start to look for Server's SystemROMs (clearly a valid Entitlement is required to access such software packages)...then something really confusing information is reported with the result selected and already filtered (as per guided filtering)...so the user start with listed results for an HPE ProLiant Server (in my case an "HPE ProLiant DL180 Gen9 Hot Plug 8LFF Configure-to-order Server"), once the user filters the desired Operating environment (in my case Microsoft Windows Server 2012 R2), filters desired Software type (BIOS (Entitlement Required)) and Software sub type (System ROM) three results finally show up (real case): 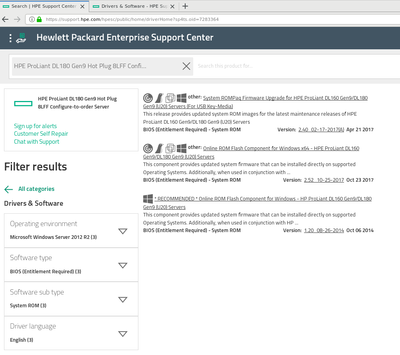 So the user expect that the selected component will report only Windows x64 compatibility and nothing more (not, as example, CentOS 7)...guess what? 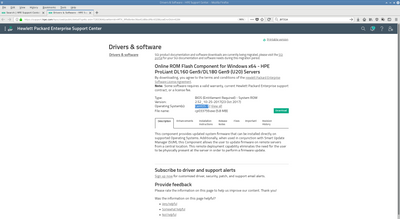 Operating System(s) - incorrectly - reports "CentOS 7" as if , contrary to the title ("Online ROM Flash Component for Windows x64 - HPE ProLiant DL160 Gen9/DL180 Gen9 (U20) Servers"), the package was expressly made for that OS (CentOS 7) and not for the desired one (Windows x64, in my case exactly Microsoft Windows Server 2012 R2 as filterd out since beginning).

The linked package is correct (indeed the download really links to cp033759.exe package for Windows x64)...the reference to CentOS 7 IMO no. Totally confusing and useless.

I'm still trying to figure out what is the purpose of placing those mini OS icons:

on each software link if those ones are then not selectable (as if, with their presence, you can then circumvent Operating System environment filter already applied and go directly to Citrix, Linux, VMware and Microsoft downloads for the selected component). Useless informations, actually.

Thank you for having taken your time to provide us with your valuable feedback on HPESC portal. Your helpful comments are much appreciated, and your feedback will help us to continually improve the HPESC portal.

This website is totaly worthless. What a waste of everyones time, we are unable to find drives/firmware for our customers.

Who actually thought this was a working replacement?

I am sorry for your frustration. You can see that you are not alone. There have been updates to the HPE Support Center every couple of weeks since its release in October, and it is continuously improving. That said, I recognize that it has plenty of room for further improvement.

In the meantime, is there something specific I can help you find?

It is unbelivable that this has been put into production. I'm searching since more than one hour for recent firmware of an MSA 2040. Unbelivable!

We are sorry for the inconvenience caused. We are frequently updating the HPE Support Center portal & it is continuously improving.

MSA 2040 latest firmware is available here:
https://support.hpe.com/hpesc/public/home/driverHome?sp4ts.oid=1008632546
I am an HPE employee
Any personal opinions expressed are mine, and not official statements on behalf of Hewlett Packard Enterprise