HPE Discover Virtual Experience – happening now through July
Click here to join
Community
Aruba & ProVision-based
Turn on suggestions
Auto-suggest helps you quickly narrow down your search results by suggesting possible matches as you type.
Showing results for
Search instead for
Did you mean:

I will start off by saying this is my first venture into Layer 3.

Hi! to let the Aruba 2930F to enable its IPv4 Routing features you just need to execute the ip routing CLI Command in config mode (then write memory).

Doing that your two defined VLANs will be routed each others (by means of the Aruba 2930F -> the static route you set will be then, and actually is, erroneous).

[*] An alternative approach (always with routing on the Switch) would be to use a Transit VLAN between the FortiGate 80C and the Switch on a dedicated VLAN...but that is another story...that's basically to avoid having the Firewall on VLANs dedicated to hosts and place it on a /30 or /31 subnet with the corresponding Switch IP on that Transist VLAN. That way the Firewall will need to know how to reach ALL VLANs behind the Aruba 2930F excluded the Transit one and, viceversa, the static RoLR will point to the Firewall IP on the Transit VLAN instead of its IP on VLAN 1 (as happens today in your setup).

In the second case your configuration will change a little bit more.

I agree with everything parnassus wrote, just would like to add something. I see the config line "management-vlan 1" in the screenshot. The idea of this feature is to restrict management access only to ports members of this vlan. For this reason routing between management VLAN and other VLANs is not allowed. Routing between VLAN 1 and VLAN2 will not be possible so this line should be removed. Management access will still be possible via any IP address of the switch.

@Emil_GogushevThank you.  I disabled the management VLAN option.

@parnassusI've now gotten ip routing enabled, I'm not sure if it didn't work before because of the management VLAN deal or what, I had tried running that to no avail in the past.  My boss wants the switch to do all the routing to reduce the load on the firewall.  If the static route that I added is not needed, how does one go about removing it?

Also, if all VLANs route between each other by default, how would yo go about stopping that?  We only want VLANs we specify to communicate to each other.

@JarlBalgruuf wrote:If the static route that I added is not needed, how does one go about removing it?

To remove/delete a static route try with the no ip route CLI command by fully specifying the involved remote network/host and the related subnet mask. Then verify with the show ip route. Do not forget to save with the usual write memory.

@JarlBalgruuf wrote: if all VLANs route between each other by default, how would yo go about stopping that?  We only want VLANs we specify to communicate to each other.

I was able to remove the static route with the no ip route command, however I cannot send traffic between the 2 VLANs, and only the 172 VLAN has Internet access.

Hi JarlBalgruuf, are you able to post the sanitized [*] configuration guide of your Aruba 2930F?

[*] sanitized = MAC Addresses, Serial Numbers and all other potentially sensitive information should be carefully removed or, at least, partially obfuscated. 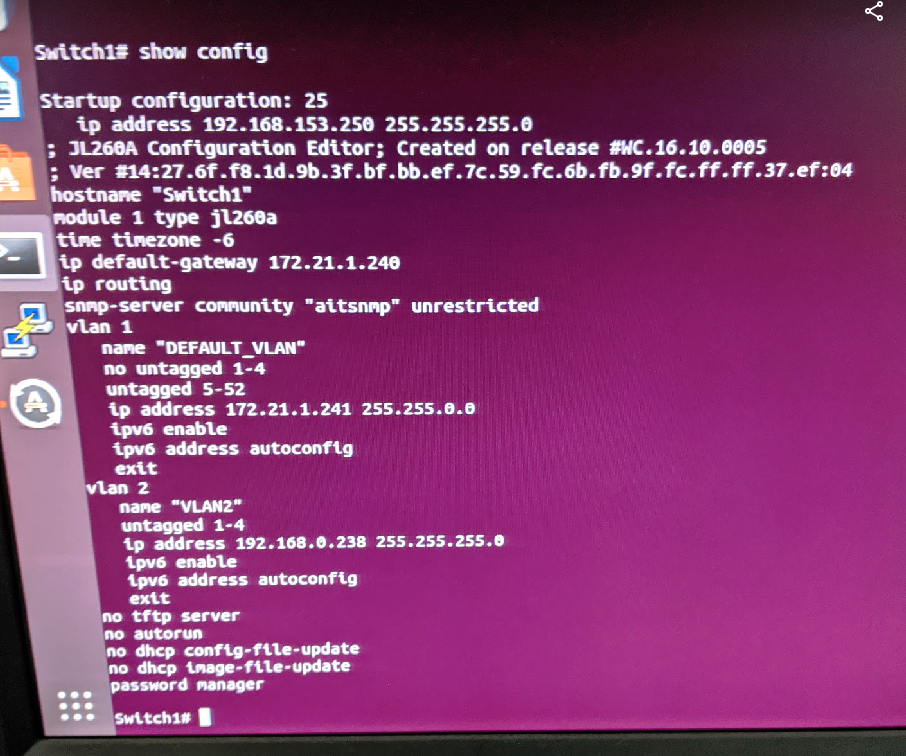 I would also suggest to remove the config line : ip default-gateway 172.21.1.240. Ip default-gateway is only used when routing is not enabled. After enabling routing you should configure a static default route to the firewall

Another option is to enable a routing protocol like rip between the switch and the firewall but this would make it unnecessey complex.