The Nimble Storage CS235 is the newest member of the Nimble family. Although Nimble announced the CS235 back in May this year, there are some enhancements in Nimble OS 2.3 that have a positive impact on the possibilities of the system.

Let’s first look into what we announced initially. 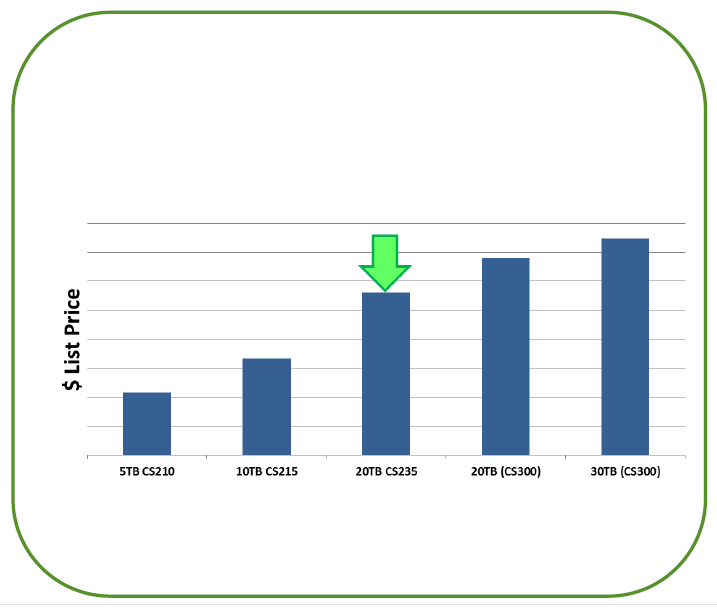 Let’s have a look at the specifications:

If we compare the new CS235 with the older existing CS215, we see the following differences and communalities:

It is important to note that the CS235 runs on newer hardware then the CS215, which means it benefits new functionalities introduced in OS 2.3 as Encryption of Data.

Nimble OS 2.3 delivers us also the new ES1-H90T disk shelves which contains 15 drives of 6 TB for a total of 90TB raw capacity. It comes with a 1920GB flash. This new disk shelf is supported on all Nimble arrays except CS210. The maximum number of shelves of this capacity is limited by the running Nimble OS. Nimble OS 2.2.6 only supports 2 of them on a CS235 where that limitation is lifted in Nimble OS 2.3.

Here an overview of that.

As you can see in the list the CS215 also supports now more than one disk shelf to give customers the ability to consolidate a lot of storage with limited amount of performance. It's a great solution for budget constraint customers.

That chart is showing the CS210 unable to handle an ES1-H90T, but it looks like that may be incorrect.  The CS Series Datasheet shows the CS210 capable of one capacity shelf up to a ES1-H90T for a max effective capacity of 140TB.

The chart is correct - attaching an ES1-H90T to a CS210 is not supported, nor is it recommended - attaching a shelf of >60TB usable capacity to a system with a maximum flash cache capacity of 640GB+1.92TB is not going to return very good cache results.

It does seem to conflict with the datasheet (thanks for pointing that out) - we'll let marketing know.