This Earth Day, We’re Focusing on the Power of Supercomputers

Earth Day is celebrated by more than a billion people worldwide, bringing social awareness to some of our most urgent and complex environmental issues, such as climate change. Here are a few of the most recent examples of how HPE is partnering with its customers to deploy highly energy-efficient supercomputers to advance critical climate research. 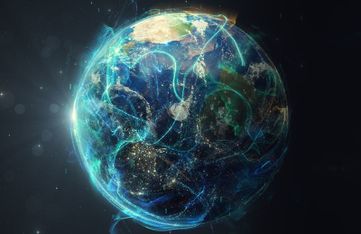 Inspired by a massive oil spill in Santa Barbara, California—the first Earth Day was held in 1970. Flash-forward 49 years, Earth Day is now celebrated by more than a billion people worldwide, bringing social awareness to some of our most urgent and complex environmental issues, such as climate change.

While Earth Day is surely an important day to honor, climate change is one of the most challenging issues facing the world today, and an issue that requires attention 365 days of the year. Just recently, the Intergovernmental Panel on Climate Change (IPCC) —an intergovernmental body of the United Nations providing the world with objective science—released its Special Report. This reports lays out the consequences of a global warming of 1.5°C above pre-industrial levels and the urgent need for a global response to address the realities of rising temperatures. And while some governmental bodies are still debating the science, we’re asking, “Can IT companies play a role to accelerate disruptive solutions to address climate change?”

Can IT companies play a role to accelerate disruptive solutions to address climate change? Absolutely.

So, while we love to spotlight the small different tips and tricks we can all adopt to minimize our environmental footprint, this Earth Day we want to focus on something bigger: high-performance computing (HPC) technology.

HPC systems, or supercomputers, have the ability to solve the most complex scientific challenges like advancing energy technologies and predicting the long-term implications of climate change. This type of analysis requires advanced computing, which traditionally requires a large amount of electricity. However, HPE is developing some of the most powerful systems that maximize both performance and efficiency. An all-around win, win.

HPC systems, or supercomputers, have the ability to solve the most complex scientific challenges like advancing energy technologies and predicting the long-term implications of climate change.

With access to unprecedented amounts of information about the world, scientists need the most powerful tools available. At HPE, we are opening up HPC to enterprises for applications such as big data analytics and artificial intelligence in order to analyze trllions of data points—from global sensors, weather stations, satellites, radar, and buoys.

Here are a few of the most recent examples of how HPE is partnering with its customers to deploy highly energy-efficient HPC systems to drive important climate research.

In 2018, HPE was commissioned to build a new supercomputer for the NREL. The Eagle supercomputer is the world’s largest HPC system dedicated to advancing renewable energy and energy efficiency technologies, running detailed models that will advance R&D across fields including vehicle, wind power, and data sciences. Eagle uses less energy than NREL’s prior system and is 3.5 times more powerful. Through collaborative efforts with NREL, from an initiative to enable data centers with hydrogen fuel cells to the new Eagle system, HPE is powering smarter, energy-conscious data center environments.

HPE is building the world’s largest Arm supercomputer in partnership with the DOE and Sandia National Laboratories. The Astra supercomputer will run advanced modeling and simulation workloads addressing areas such as national security, energy, and science. It features the power-efficient HPE MCS-300 cooling unit, which improves operational performance and delivers cost savings over traditional air-cooled solutions.

In 2017, NCAR deployed HPE SGI 8600—one of the earth’s greenest supercomputers—to run large scale models and research on the atmosphere and our changing climate. Billions of mathematical calculations are required to model weather patterns that are performed by supercomputers. HPE supercomputer delivers 3X the performance of existing systems without expanding energy use and reduces infrastructure footprint by 66% when compared to the previous supercomputer.