Last week's blog. “Matchmaker Series part 2” took a look at HPE ProLiant Server pairings for Microsoft Windows Server 2016 Standard edition. Today, we continue with our Matchmaker series and will look at a few servers we think pair best with the Datacenter edition of Windows Server 2016.

Now that you know some of the perks of HPE OEM Windows Server 2016, let's take a look at the HPE ProLiant Servers we think pair best specifically with the Datacenter edition. 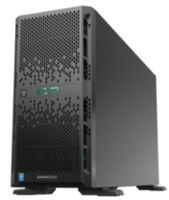 The HPE ProLiant DL360 Gen9 Server delivers a 1U chassis with up to two processors, delivering an optimal unit that combines high-performance, low energy consumption, improved uptime, and increased density.

The HPE ProLiant DL380 Gen9 Server delivers the latest performance and expandability. Reliability, serviceability, and near continuous availability, backed by a comprehensive warranty, makes it ideal for any server environment.

The HPE ProLiant DL560 Gen9 Server is a high-density four-socket (4S) server with balanced performance, increased scalability and reliability, all in a 2U chassis.

Want to learn more about HPE ProLiant Gen9 Servers + Windows Server 2016? Be sure to follow Coffee Coaching's social channels for the latest news and updates: