SATA vs SAS vs NVMe? Making Sense of Storage Interfaces 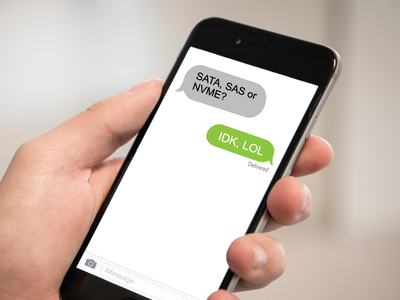 Like back roads and highways, these three types of storage interfaces get your valuable data from point A to point B.  Here’s how to choose which option is best suited for your data’s daily commute.

Is your teen texting about server storage interfaces? If you’ve seen them type “SCSI,” they likely mean “Sorry Can’t Stop It, “but could they also be talking about “Small Computer System Interfaces?” With all the acronyms, it can be hard to tell the difference between “sas” and “smh.” But if you’re in the market for storage, you’ll need to know three acronyms very well to ensure you’re getting your money’s worth: SATA, SAS, and NVMe.

These three types of storage interfaces serve as the infrastructure for your data transfers. It’s what gets your valuable information from point A to point B. And just like our roads and highways, there are many options that are best suited for different scenarios. So whether you’re simply archiving data for compliance with government regulations, or you’re selling products on your website, you’ll want to strategically choose the interface—or mix of interfaces—that’s right for you.

SATA is the oldest and cheapest interface. Your daughter might call it “basic.” It’s the county roads you drive on when grandma’s in the car and you’re not in a rush. SATA interfaces deliver data through a high-speed serial cable over two pairs of conductors. Back in the 90s, this was a remarkable improvement to interfaces that used parallel data streams. By transmitting data serially, SATA was able to wrap multiple bits into packets and move the data faster than ever before. And while they may not be the most state-of-the-art option today, SATA interfaces are still used in almost every laptop you see on the market.

In a server environment, SATA does come with a few drawbacks. Most notably, SATA can’t read and write simultaneously because it only features half-duplex capabilities. It also has less functionality for error recovery and reporting. So for light workloads involving cold (rarely accessed) data, SATA is a great bargain. However, at the enterprise level, you’re more likely to want SAS channels for your more demanding workloads.

Ultimately, SATA is your best choice when cost is more important in your storage interface decision than performance. For more complex workloads requiring higher performance, you’ll likely want to upgrade to SAS.

SAS was the natural evolution of SATA once solid state drives came into play. It’s the highway you take on your daily commute to work: you ought to get there on time, but you’re not going to break your back to see Karen in accounting two minutes earlier.

The main difference between SAS and SATA is the point-to-point serial protocol. With SAS, controllers are linked directly to the drive; it also enables the connection of up to 128 different devices via thinner and longer cables. Plus, SAS has full-duplex capabilities supporting simultaneous read and write tasks at high speeds.

For these reasons, SAS is the most common storage interface in data centers. It’s reliable, gives you a great speed-to-cost ratio, and features built-in error checking for end-to-end data integrity. And SAS can also be configured to operate in the same environment as SATA. So you can use SAS drives for your hot (frequently accessed) data, while leveraging the cost advantage of SATA drives for colder data.

Choose SAS if you want to meet the industry standard today. And if you’re looking farther down the road, consider NVMe.

Your daughter’s dance recital starts in 15 minutes and the shaky phone recording’s not going to cut it. You need to get there now, no matter the cost. For enterprises that need heavy duty compute power, there’s no better performer than the NVMe storage interface. It costs a pretty penny, but it’s worth it if speed is your primary decision factor.

NVMe’s were invented to address a burgeoning problem for server manufacturers. In the early 2000’s, the first PCIe bus offered significant increases in bandwidth because it attached directly to the CPU. Unfortunately, this bandwidth was bottlenecked by storage interfaces that were designed for hard disk drives. So NVMe was created to future-proof the interface and take full advantage of advancements in server technology.

NVMe sits directly between the device driver and the PCIe device, enabling low latency, scalability, and security. This allows them to deliver up to 4 times better I/O operations per second than the most advanced SAS interfaces. Additionally, by enabling drives to use the same “pool” of lanes connected to the CPU, NVMe significantly increases scalability. From a cost standpoint, NVMe can greatly reduce power consumption and improve security to meet standards like the Opal and Enterprise SSC (Security Subsystem Class) specifications.

While this powerful new storage interface has yet to become the standard in server storage interface technology, it is certainly the next big thing. So if you want to set up your storage environment to exceed the status quo in ten years, it’s worth investing in NVMe now.

This breakdown should give you a good idea of what storage interfaces are right for your server environment. Whether you’re purchasing the Ferrari of servers or a modest Vespa, consider first the infrastructure you’ll be driving on. For basic read or write tasks dealing with cold data, SATA will be kind to your budget. Likely, you’ll want a mix of SATA and SAS to handle all of your workloads. If you want to future-proof your data center, ask your HPE representative about NVMe interfaces. And next time your daughter asks you to stop talking to her about server storage, just text her “scsi. smh.”