Introducing HPE ProLiant DL325 Gen10, part of the world’s most secure industry-standard server family. This server brings innovation, performance and security, along with HPE Silicon Root of Trust and HPEOneView. 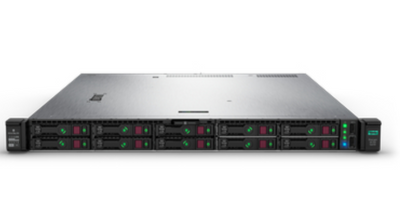 On June 5, HPE announced the extension to the world’s most secure industry-standard server family(1) with the HPE ProLiant DL325 Gen10. Based on the AMD EPYC™ processor, this versatile, secure single-socket server offers an exceptional balance of processor, memory and I/O. With support for up to 32 processor cores, 2TB of memory and 40TBs of NVMe SSD storage, the server is built to address dense virtualization and software-defined storage applications.

In addition to the core and memory advantages, the HPE ProLiant DL325 takes better advantage of the 128 PCIe lanes using 4 PCIe lanes to directly attach to each of up to 10 NVMe SSD drives fast access to data stores. The HPE ProLiant DL325 Gen10 listing as a certified VMware vSAN ReadyNode™ is coming in mid-to-late July. With software-defined storage like VMware vSAN ReadyNode, your data is protected from a hard drive failure and can be recovered in less than 5 minutes.(4)

In the past, the cost and complexity of software-defined storage has made it more suitable for enterprises. But now, software-defined storage based on the HPE ProLiant DL325 and VMware vSAN frees you from the cost and complexity of traditional storage arrays with low-cost, scalable storage that’s simple to deploy, manage, and support. You get all of the things you expect with an HPE ProLiant server: innovation, performance and security. This includes security features like the HPE Silicon Root of Trust technology, which designs security directly into the iLO 5 chip, creating an immutable fingerprint in the silicon and preventing compromised firmware from being deployed. And the AMD Secure Processor integrates with HPE security features to ensure the validation of the BIOS firmware before allowing the server to boot up. Additionally, the AMD Secure Processor enables Secure Memory Encryption and Secure Encrypted Virtualization.

HPE gives you an easy way to get started with the HPE ProLiant DL325 by offering a 90-day deferred payment option and zero-percent financing for 42 months. With the server trade-in program, you receive fair market value for your old server, making a new server purchase even more cost effective—and helping you achieve faster return on investment.

1 Based on external firm conducting cyber security performing penetration testing of a range of server products from a range of manufactures, May 2017

3 Based on a comparison of the SPECvirt_sc2013 results of the ThinkSystem SR650 with 2 Intel Xeon Platinum 8180 processors versus the HPE ProLiant DL325 Gen10 with 1 AMD EPYC 7551P.  SPEC and the benchmark name SPECvirt_2013 are registered trademarks of the Standard Performance Evaluation Corporation (SPEC). The stated results are published as of 06-05-18; see spec.org. Lenovo pricing from Lenovo site as of 05-14-18. HPE pricing is internal as of 06-05-18.

Naren brings to bear 15+ years of Business and Product Management leadership experience spanning country, Regional and WW organizations to the singular objective of delivering THE “best-in-breed” server platforms to enhance the leadership position of HPE in the industry standard x86 market. And he does that with cradle to grave ownership of the HPE ProLiant server portfolio.