Just unveiled by the National Energy Research Scientific Computing Center at the U.S. Department of Energy’s Lawrence Berkeley National Laboratory, Perlmutter is now ready to play a key role in advanced computing, AI, data science, and more. It’s the first in a series of HPE Cray EX supercomputers to be delivered to the DOE.

I’m happy to share that the National Energy Research Scientific Computing Center (NERSC), a high-performance-computing user facility at the U.S. Department of Energy’s Lawrence Berkeley National Laboratory, announced that the phase 1 installation of its new supercomputer, Perlmutter, is now complete. 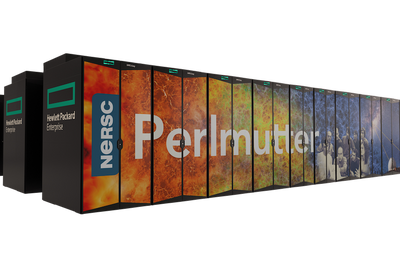 An important milestone for NERSC, the Department of Energy (DOE), HPE, and the HPC community

Perlmutter is the largest system that’s been built using the HPE Cray EX supercomputer shipped to date. It’s the first in a series of HPE Cray EX supercomputers to be delivered to the DOE for important research in areas such as climate modeling, early universe simulations, cancer research, high-energy physics, protein structure, material science, and more. Over the next few years, HPE will deliver three exascale supercomputers to the DOE, culminating in the two exaflop El Capitan system for Lawrence Livermore National Laboratory.

The HPE Cray EX supercomputer is HPE’s first exascale-class HPC system. Perlmutter is using many of its exascale era innovations. Designed from the ground up for converged HPC and AI workloads, the HPE Cray EX supports a heterogenous computing model, allowing for the mixing of compute blades across processor and GPU architectures. This capability is important for the NERSC usage models.

Perlmutter will be a heterogeneous system with both GPU-accelerated and CPU-only nodes to support  NERSC applications and users, including a mix of those who utilize GPUs and those who don’t.

Phase 1 is the GPU-accelerated portion of Perlmutter and contains 12 HPE Cray EX cabinets with 1500 AMD EPYC nodes each with 4 NVIDA A100 GPUs for a total of 6000 GPUs. Phase 2 will add an additional 3000 dual socket AMD EPYC CPU only nodes later this year housed in an additional 12 cabinets.

Perlmutter takes advantage of the HPE Slingshot Interconnect that incorporates intelligent features that enable diverse workloads to run simultaneously across the system. It includes novel adaptive routing, quality-of-service, and congestion management feature while retaining full Ethernet compatibility. Ethernet compatibility is important to NERSC’s use of the supercomputer as it allows new paths for connecting the system more broadly to their internal file system as well as the to the external internet.

HPE Cray software is designed to meet the needs of this new era of computing, where systems are growing larger and more complex with the need to accommodate converged HPC, AI, analytics, modeling ,and simulation workloads in a cloudlike environment. The HPE Cray software deployed with Perlmutter will be key to NERSC’s ability to deliver a new type of supercomputing experience to their users who are becoming more cloud-aware and cloud-focused.

The exascale era is just beginning

We here at HPE are very excited and committed to this journey with the DOE, as we help shepherd in a new class of supercomputers that will drive scientific research at a scale that is barely fathomable today.

Perlmutter is the important first step on this path and we look forward to seeing the many benefits of diverse scientific discoveries that NERSC will deliver with its new HPE Cray EX supercomputer.

Joseph George is the Vice President of Compute, Industry & Strategic Alliance Marketing at Hewlett Packard Enterprise. Joseph and his team develop new and innovative ways to reach customers with revolutionary compute solutions, all while engaging customers in industry and collaborating with strategic alliance partners to solve customer business challenges.