In this blog article, I want to give you an overview of some huge news from HPE Discover 2019. If you’d rather watch a video, this Chalk Talk is the same information. 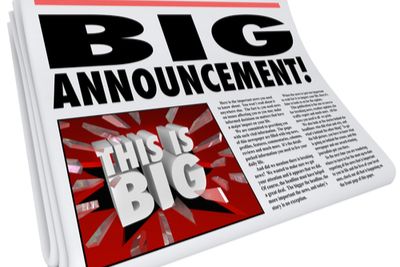 We are making a series of announcements at Discover – the most significant announcements we’ve made in the last 10 years. I have a number of Chalk Talks diving into most of the topics. I’m only going to talk about things at a high-level or this would turn into an 10,000 word article, so click the Chalk Talks if you want to learn more. We’ll also have articles in the coming days and weeks that go a lot deeper than I can talk to these topics.

Every enterprise will need to have an intelligent data strategy, where your data is always on and always fast, automated and on-demand, hybrid by design so data is accessible and usable across your cloud environments, and applies global intelligence for visibility and lifecycle management.

Our strategy is to deliver an Intelligent Data Platform that turns your data challenges into business opportunities. It begins with workload-optimized composable systems. The Global Intelligence Engine infuses the entire infrastructure with intelligence. The Automated application and data management layer offers pre-built automation connectors as well as application aware protection.

Let me summarize what we announced:

The world’s most intelligent storage for mission-critical apps – HPE Primera!

Let’s look at HPE Primera. Customers using traditional tier-0 storage like Dell EMC PowerMax have to trade off easy to 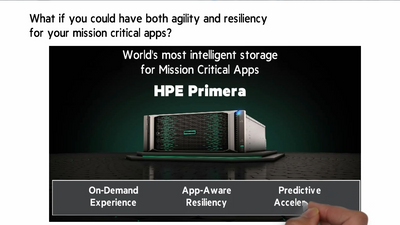 Image from my HPE Primera Chalk Talkuse and agility to get resilience and performance. We realized we had an opportunity to bring together the ease of use of Nimble Storage, the predictive and AI capabilities of InfoSight, and the proven resilience and performance at scale of 3PAR – to redefine mission critical tier 0 storage. Introducing the world’s most intelligent storage for Mission Critical Apps, HPE Primera. It delivers:

There’s a Chalk Talk with a lot more on HPE Primera.

A couple of other things to mention with HPE SimpliVity:

Check out the InfoSight for HPE SimpliVity Chalk Talk I have to learn more.

Here’s a link to my Nimble Storage dHCI Chalk Talk with more. You can read more about dHCI too in this blog: “Give me more…hyperconverged please!”

Hybrid Clouds have largely been available for stateless workloads. Many next generation applications are being 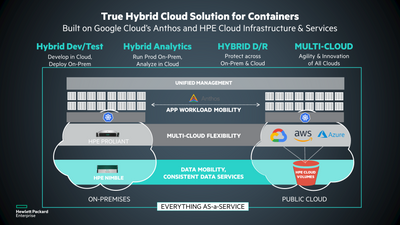 developed with containers. So the announcement with HPE and Google Cloud address this. With the HPE and Google Hybrid Cloud solution, we are now able to deliver a true hybrid cloud optimized for container-based workloads.
NOTE: Click image to get a larger view.

Finally, we also offer the HPE and Google Hybrid Cloud with HPE GreenLake so it can be optional delivered as a service.

I don’t have a Chalk Talk about this – but Sandeep Singh talks about it in this blog post: Introducing: True hybrid cloud for containers

The final topic is AI and Machine learning. HPE is helping make AI easy and real with BlueData software, that we acquired in late 2018.  This is enabling an “as-a-service” experience so data scientists can stitch together pipelines in a matter of minutes. This is a game changer.  Think of BlueData as a hypervisor for containers – a fully orchestrated containers stack. It taps into the existing data pools instead of requiring new silos of data lakes. It also virtualizes the underlying hardware, including making GPUs as a service – and those GPU cycles are very expensive.

The BlueData software is now available on HPE Apollo Systems, with third party hardware and natively in the public cloud. I don’t have a chalk talk on this but we do have blog articles on Around the Storage Block where you can learn more as well as at hpe.com/info/bluedata.

The Intelligence Era is important for customers to consider and to transform from operators to a strategic partner. HPE is uniquely positioned to address the requirements of the Intelligence Era – the announcements I’ve shared show that HPE is laser focused on doing that – through global intelligence, workload-optimized composable systems, true hybrid cloud, and AI and ML for the mainstream.

Be sure to visit our Around the Storage Block blog as we dive deeper into the news I shared in this overview.

About The HPE Storage Guy (aka The Storage Godfather)

I'm Calvin Zito and November 16, 2018 marks 35 years with HP/HPE. I've worked in HPE Storage since 1990. I was just recognized as a 9 time VMware vExpert. As an early adopter of social media and active in communities, I've blogged for 10 years. You can find me on Twitter as @CalvinZito. If you don't follow me on Twitter, do it now! You can also contact me via email.