In this post, I'm going to focus on a software-defined scale-out file storage system solution we have in partnership with Qumulo.

At HPE, we have a program called HPE Complete.  The goal is of the program - from their hpe.com website - is to give customers a one-stop shop for validated HPE and third-party partner end-to-end infrastructure solutions. Kate Davis had a blog post last year that did a great job explaining HPE Complete and what we in HPE Storage are doing.

One of the strategic partners in HPE Complete is Qumulo. I had done a blog post with a video that introduced Qumulo from Discover in Las Vegas. To summarize, Qumulo's focus is a modern scale-out storage system designed from the ground up for the new era of multi-petabyte data scale on-premises and in the cloud. Available on density-optimized HPE Apollo 4200 Servers, the solution 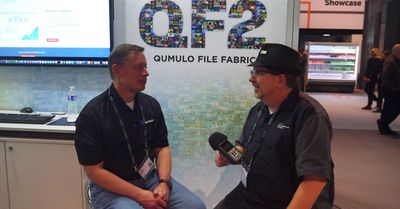 allows you to store up to tens of billions of files with scalable throughput while providing real-time visibility and control for file systems at petabyte scale in less physical space.

When I heard that Qumulo would be at Discover Madrid and I had heard about some new things to talk about, I reached out to Joel Groen from the Qumulo product management team. I had talked to Joel in Las Vegas and he was eager to talk about what was new with Qumulo.

In my podcast with Joel, we talked about the Qumulo File Fabric which enables customers to put file data either on-premises or in AWS. Joel also talked about the availability of Qumulo in Europe.

Here's the podcast (either click on the link to play it now or right click and save it).

To subscribe to the podcast, open this link and click on the "View in iTunes" button under my picture. If you don't use iTunes, you can find my podcast on TalkShoe.com and it has just been added to Google Play Music as well.  On Google, you'll get "invited" to try Google Play Music for 30 days - just click "no thanks" to get past this and get to the podcast.

Here are a few links to help you learn more:

I'm Calvin Zito, a 34 year veteran in the IT industry and have worked in storage for over 25 years. I am a seven-time VMware vExpert. As an early adopter of social media and active in communities, I've blogged for 9 years. You can find me on Twitter as @CalvinZito. If you don't follow me on Twitter, do it now! You can also contact me via email.