Virtualization is dead and forgotten. 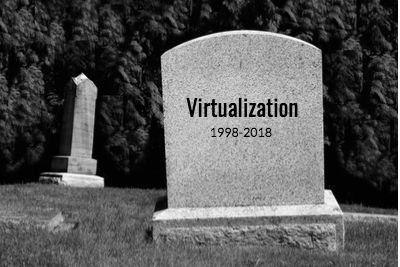 You would have thought so if you attended one of the recent IDC Directions events in search of the latest info on virtualization. The IDC analysts shared fantastic data and insight on all things relating to the digital transformation of business, cloud, AI, HCI, IoT, blockchain and even mention of Quantum computing. But nothing on virtualization. This goes for VMware, vSphere or any related topic or product. To an unsuspecting attendee, you would have thought virtualization was dead and forgotten.

Truth is though, virtualization is alive and well. VMware still claims 500,000 customers, running a total of 50 million VMs. In a recent financial report, VMware disclosed it’s bringing in over $6.6B in what appears to be just vSphere license and maintenance revenues. That’s more than some Fortune 500 companies ring up annually for all of their products!

More interesting, though, are the new developments touching virtualization these days. Here’s the run down on a few.

Artificial Intelligence (AI) did make IDC’s shortlist for hot topics, but in this instance it’s being used to keep virtualized environments trouble-free and highly available. Case in point: HPE InfoSight Cross-Stack Analytics for VMware. HPE InfoSight has become well known for bringing AI to the data center. And it actually did get a lot of mentions at the IDC show. The specific capability responsible for keeping Virtualized environments healthy and available is the Cross-Stack Analytics feature. Formally known as VMVision, this feature quickly diagnoses performance issues between storage and VMs and optimizes virtual resources.  It can also pinpoint “noisy neighbor” VMs, and correlates performance across host, network, and storage layers. Here’s an infographic on it.

What’s newsworthy about this capability (originally just available with HPE Nimble Storage arrays) is that it’s now available (also for free) on HPE 3PAR StorServ storage. Here’s the news on this 3PAR enhancement along with a recorded demo showing how the VMware related analytics are captured and presented.

After the world got proficient in virtualizing x86 systems, the density of VMs per system grew: from just a few, to 15 VMs per server, and nowadays as many as 100 given the right multi-socket/multi-core system. So the IT problem shifted from solving WinTel proliferation, to now managing the challenge of VM proliferation. This is especially acute for large enterprises and service providers, who need to ensure the accurate and consistent administration of thousands of VMs.

To the rescue came tools like VMware vRealize Operations, along with vRealize Orchestrator and vRealize Automation, which now allow the management at scale of virtualized environments with unified monitoring, automated provisioning, performance management, and capacity optimization, even across multi-cloud and heterogeneous infrastructure.  What’s new are innovations in how these products are being bundled, distributed and integrated.  Along with buying them separately, vRealize management components are now available along with the latest version of VMware Cloud Foundation 2.3.  And a robust ecosystem of players such as Blue Medora are developing plug-ins that integrate leading data storage platforms directly into these automation and monitoring products.

The maturity of the virtualization management environment is setting the stage for the next wave of tech adoption.

An interesting development we’re seeing in customers’ environments is virtualization as a key enabler for new innovations like multicloud and containers. My perception around containers and VMs was one of oil and water, akin to these stories about “battle lines being drawn.” At the very least, I thought of these as either alternative approaches to app management, or two parallel approaches being used separately by different IT teams. However, I was speaking with a colleague the other day and learned that almost half of the customers they were working with were running Containers within VMs! So here you see “traditional” virtualization enabling new waves of innovation in cloud-native applications, DevOps and microservices.

Traditional virtualization is still the dominant way to manage data center applications, and recent innovations in AI, automation and usage are prolonging its prominence and importance.

The value of VMware virtualization is accentuated when paired with the right infrastructure hardware. Extend the value of your familiar Virtualization tools and methods with one or more of these related innovations mentioned here.

To see one of these in action, watch this recent VMUG webcast on Automating Storage Provisioning in VMware Private Cloud using vRealize Orchestrator, delivered by virtualization solution team leads from HPE.

Mike leads the marketing of new and established solutions and products at HPE. He came to HPE via Nimble Storage, and prior to that led the marketing of the NetApp Converged Infrastructure effort, including the multi-billion dollar FlexPod solution. Mike has over 25 years of marketing experience at both start-ups and larger tech companies and tweets regularly under the handle @mhardi01.