It has been more than two years since we announced federated deduplication.This technology addresses many of the shortcomings of other deduplication solutions—such as incompatible deduplication algorithms implemented in software and hardware, comparatively slower restore performance versus backup performance, and inefficient methods of scaling deduplication to meet ever expanding capacity requirements. All of these challenges result in increasing risk, additional costs, and significant management overheads for the user. So, let’s take a closer look at HPE StoreOnce deduplication and the benefits it brings. 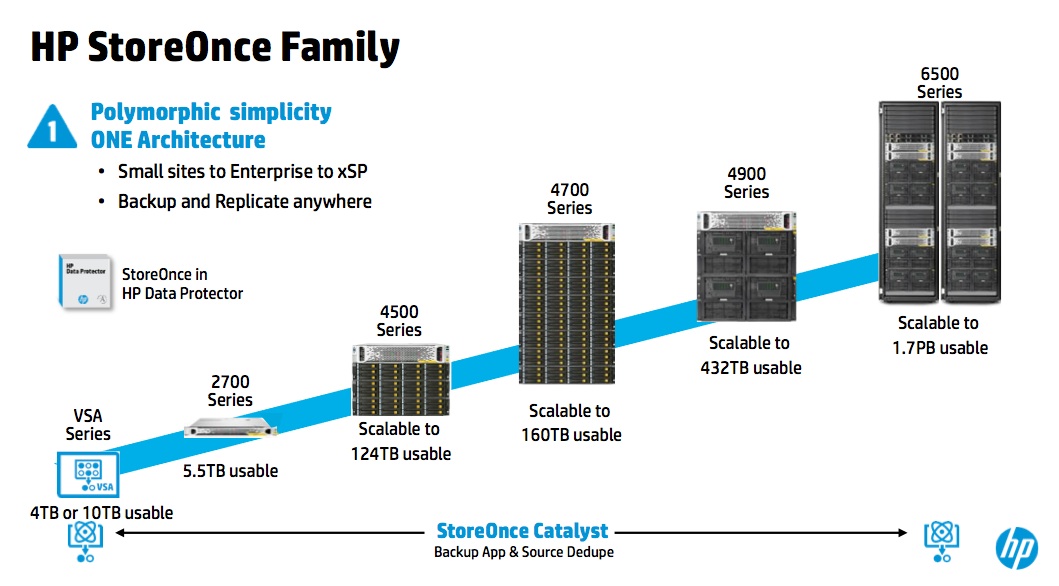 Check out our HP StoreOnce portfolio

StoreOnce federated deduplication is a technology developed in HP Labs, which can be deployed across the entire storage infrastructure. It provides deployment independence enabling movement of data across various HPE systems without rehydrating the data. Federated deduplication allows data reduction to occur in HPE Data Protector Software, in HPE StoreOnce Backup appliances, in a virtual machine, or as a standalone deduplication API on a server.

For restoring data, HPE’s approach involves having large-container technology with superior disk layouts. A high degree of fragmentation is avoided by not replacing small amount of deduplicate data with pointers to faraway places with no related data. Data is defragmented after deduplication. This results in faster restoration of data as reconstituting data does not require many slow random seeks.

StoreOnce Catalyst is a key component in our federated deduplication architecture that enables deduplication anywhere, rather than specific points in the network allowed by the vendor’s technology. It leverages a common algorithm across the enterprise and allows deduplication at the:

Catalyst provides a single technology that can be used in multiple locations on the network without requiring rehydration when data is transferred between source server backup device and target appliance.

Multiple StoreOnce appliances and virtual machines can replicate to a central StoreOnce appliance—with a fan-in of up to 384 remote offices to a single HP StoreOnce 6500 target delivering greater economies of scale for disaster recovery. HPE StoreOnce VSA can be deployed at:

By combining federated deduplication with our unique scale-out cluster architecture, we deliver the industry’s only large-scale deduplication appliance with fully automated high resiliency features such as high availability (dual controllers) and autonomic restart of failed backup jobs. Our solution is designed to simplify and speed up Big Data backup with scalable capacity and performance.

All that—and a deduplication guarantee too

We are so confident about our federated deduplication technology that when companies move from legacy storage backup system to any HP StoreOnce Backup solution, we are willing to offer a 20:1 deduplication guarantee thanks to our HP StoreOnce Get Protected Guarantee Program. This reduces the amount of stored backup data by 95% or HP will make up the difference with free disk capacity and support.