The Universal SATA card has 2 x SATA connectors, which are connected (I believe) to the SATA ports 1 & 2 on the motherboard. Unfortunately, this means that we can't create a RAID 1 array with the 2 x 240GB M.2 SSDs that is recognised by vmware ESXi 6.5.

What we would like to do is to link the M.2 SSDs to the smart array controller rather than the motherboard, using a mini-SAS to SATA cable (e.g. 620796-001). Is this possible?

M.2 SSDs drives are attached to the PCIe interface directly and do not have a dedicated hardware RAID engine similar to SAS controllers, therefore, RAID is only supported through the operating system software (e.g., Windows mirror, Linux MD, etc.). 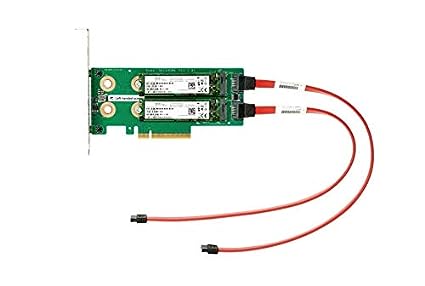 Given that these cables are present, surely it's possible to connect the SATA interface on the card to an appropriate RAID controller, given the correct cable. If the data connection is purely through the PCIe interface, why bother with the dual SATA cables?

Hi Troia, do you know if a ssd nvme ex900 could be compatible with the Kit?

OK, so I bought a cheap generic 4 x SATA to mini-SAS 50cm cable, and plugged the M2 drives on the PCIe card into the Smart Array p816i controller, which recognised the 2 x M2 SATA drives, so I could configure them as a RAID 1 mirror and install ESXI.

You are best off looking at the official Quickspecs for the server in question to see what NVMe drives and controllers are compatible and available.