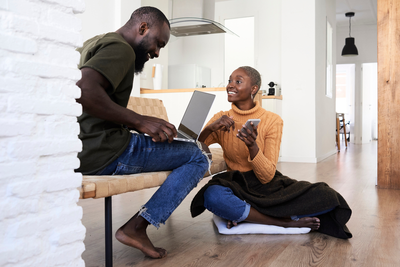 In this new work-from-anywhere world, wireless coverage has risen as a top priority for all of us. I’ve been working remotely for more than 12 years, and that experience has given a good feel for what kind of networking gear fills my needs for reliability, performance, security and, of course, cost.

But now, even for me, the situation has changed. My wife is working from home every day, my son is back from college, and my daughters are both attending school virtually.

With a burgeoning number of Wi-Fi clients at the bandwidth feeding trough, I have been challenged to find a better solution for my office-school-home.

Last year I decided my Wi-Fi was just not cutting it anymore. I had a router/access point (AP) running upstairs and the same router model downstairs connected via Ethernet but running as a secondary access point/switch. I did some research and in January bought a three-pack of consumer-grade mesh APs I believed would do the trick nicely.

While the overall performance was better, I still had a few trouble spots with undependable coverage and throughput. So, I bought a fourth AP of the same line, and then tried to find the optimal mesh configuration for placement and connection modes.

The result was more money sunk into the pit, mega-hockey puck APs strewn around the house, and a network still not up to the level I needed. What to do now?

My focus at HPE has been with small to midsized businesses. I knew about the Aruba Instant On series, squarely built for the SMB. I just had never thought it might be for me, too. How many of our SMBs might have a similar network environment as mine, or have the same work-from-home challenges with their wireless network under duress? Plenty, I suspect, so I took the leap and started shopping for Aruba Instant On.

The Aruba Instant On Product Finder guided me to the AP12 based on my input, so I ordered two AP12s to cover my 3,134 sq/ft two story home. Could two AP12s really replace my four access points and increase performance and coverage and give me enterprise grade Wi-Fi I don’t have to worry about?

Let’s set the stage with some overall information and specs for my original four access points and for my two new AP12s.

My ISP provides a symmetrical 1 Gbps connection via Ethernet directly from the outside ONT into my wall where I connect to my router—wireless is disabled on the router which supplies DHCP and firewall duties. I have several unmanaged switches throughout my network with about 25 wireless devices sharing the Wi-Fi at any given point and use a Pi-hole to block ads.

The table below shows the results I got from testing my original APs in different locations throughout the house, and then testing with the new Aruba AP12s in the same locations. I was curious what the single AP12 could do, so I captured that data before connecting the second AP12 downstairs via wireless, then connecting that second AP12 via Ethernet since I have capability for wired connections downstairs. For the phone measurements, I used the same speed test app with the same server for each test. I know there are lots of variables affecting wireless performance, but I feel my approach gives an honest layperson’s comparison of my experience.

The AP12s came with external power supplies which had ferrite suppression clamps on both ends of the DC-out wire. The HAM radio guy part of me really appreciated that attention to detail. Installation was simple: install the Aruba Instant On app, create and log in to the account, connect Ethernet and power, and follow the app instructions. The app interface is easy to navigate, and clearly Aruba designed this to be set and forget for the user: there is no guessing which options to use, and the firmware updates are automatically downloaded and applied.

One can also manage the APs via the web portal (https://portal.arubainstanton.com/ ) using the account information created with the app. There is a way to use CLI if you are so inclined, but the average person with my use case would not likely do that. Still, it’s nice to know you can.

*I looked at these phone results in bedrooms 1 and 1 (kids’ rooms), then ran the speed test from each of their desktops—they were so much better on the desktops, each showing up/down greater than 100Mbps. I’m not sure what was going on there. I’m still happy since my minimum performance requirement is 25Mbps.
**Bike tablet was having some problems during these tests which finally resolved after I had moved on to other test configurations.

As you can see from the data, the overall performance and coverage is much better with the Aruba AP12s, and I am quite happy with these results. Now I have two AP12s instead of the four APs with better coverage and performance. Most notably, I finally have a stable and quick connection for my wife’s training bike. So, two can be greater than four, and less can be more with Aruba Instant On.

I'll be mounting these neatly to the ceiling using PoE switches soon, so will update this blog afterward to share how things are going. Please share any comments or questions you have, and consider Aruba Instant On for your home office or small business. They work great!