What are RAID levels, and which are best for you? 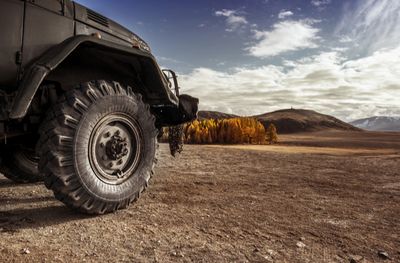 Just as all-terrain vehicles distribute torque to all four wheels simultaneously, easing the load borne by each wheel, striping distributes data across two or more disks.Just like four-wheel drive on your vehicle, RAID storage solutions can improve your safety, performance, or both. Here’s the quick and dirty on what it all means, and which strategy is best for you.

I was never the car guy in the family, so when I asked my dad how four-wheel drive works at the ripe old age of 25, he was unsurprised—if still a bit disappointed. “Well, why don’t all cars use four-wheel drive all the time?” I asked when he explained. Shame aside, dad taught me a lot that day.

There are cars that use all-wheel drive all the time, but they’re usually only appropriate for certain terrains, and can cost you more in the long run. Meanwhile, many cars have the option to turn four-wheel drive on and off depending on what kind of roads you’re driving on. But if you’re a city-dweller, my dad noted, there’s no reason to pay more for a car with that feature because you’ll never need to use it.

The same logic applies to server storage controllers that support RAID. RAID stands for Redundant Array of Independent Disks, and it helps manage how your servers store data. Controllers support different RAID levels that can boost performance, prevent data loss, or both. And it’s paramount to choose the correct RAID level for your unique business needs.

Before diving into each RAID level’s strengths and weaknesses, it’s important to understand the four key methods that controllers use to optimize your server performance: spanning, striping, mirroring, and parity.

If you’re lugging 4 tons of cargo across the country, you’re going to want 18 sturdy wheels under all of that weight. Likewise, if you’ve got a heap of data to store, and it doesn’t need to be accessed too often, JBOD (Just a Bunch of Disks) will meet your needs. Though technically not a RAID level, JBOD is the best introduction to these kinds of controllers. Through a simple method called spanning, JBOD connects 2 or more disks to achieve the grand sum of each disk’s storage; essentially, the entire environment presents itself as one disk when you access the data. When one disk fills up, the rest of the data spills over to the next, and the next. If one disk goes down, you will lose all data on that disk, but it won’t affect the rest of the array. JBOD won’t improve performance or protect your data, but it’s a cost effective way to boost your capacity.

Striping is much like four-wheel drive. Just as all-terrain vehicles distribute torque to all four wheels simultaneously, easing the load borne by each wheel, striping distributes data across two or more disks, so both disks are needed to put the complete data set back together. By using the combined power of multiple disks for read and write operations, striping allows for higher data throughput (i.e. better performance). One person can finish a puzzle alone, but two people can finish it faster.—That’s striping in a nutshell.

Mirroring, on the other hand, improves data security, rather than performance. This technique writes identical data to pairs of disks. If the first disk in the pair breaks and gets replaced, the second disk copies the mirrored data onto the new one. This makes data recovery a snap, but it also reduces your servers’ capacity because you need two disks to store one disk’s worth of data. It’s like having a spare tire that replaces a busted one without you having to lift a finger: convenient in a sticky situation, but you still have to pay for that extra tire.

Parity Information is a small amount of data that accurately describes large amounts of data. At certain RAID levels, blocks of parity information are stored across multiple disks, and then are used to rebuild the data lost when one disk in the array fails. And whereas mirroring takes up half of your storage capacity, parity blocks only constitute a third of your overall storage capacity.

RAID can be controlled on hardware or software, but medium-to-enterprise sized businesses typically rely on hardware. Software RAID is typically installed on the operating system and works by setting up a single disk with 2 partitions—one to boot from, and the other for storing data. It’s less costly because you don’t have to buy hardware, but it supports fewer RAID levels and can limit the performance advantages.

Hardware RAID controllers attach directly to your drives and govern how data is stored on each disk. These controllers support all levels of RAID and are designed for SMBs and enterprises alike to take full advantage of their storage environment. Similar to a turbo charger in a car, hardware controllers put your server storage into overdrive by improving performance and great efficiency for the overall system.

Does it matter what controller I have?

Short answer: yes! Different controllers support different levels of RAID, and all are not made alike. In fact, HPE’s newest line of smart controllers can enhance both the security and performance of different RAID levels. They add encryption at the controller level and feature health monitoring capabilities so you have complete transparency into the life of your disks. They can also deliver up to 65% better performance over previous generation controllers (that’s 1.6 million IOPS!). So once you’ve decided which RAID level is right for you, contact an HPE representative to be sure you’re installing the best equipment possible in your server environment.
And don’t forget that while RAID can add crucial fault tolerance to your data system, it’s no replacement for a comprehensive disaster-recovery plan. 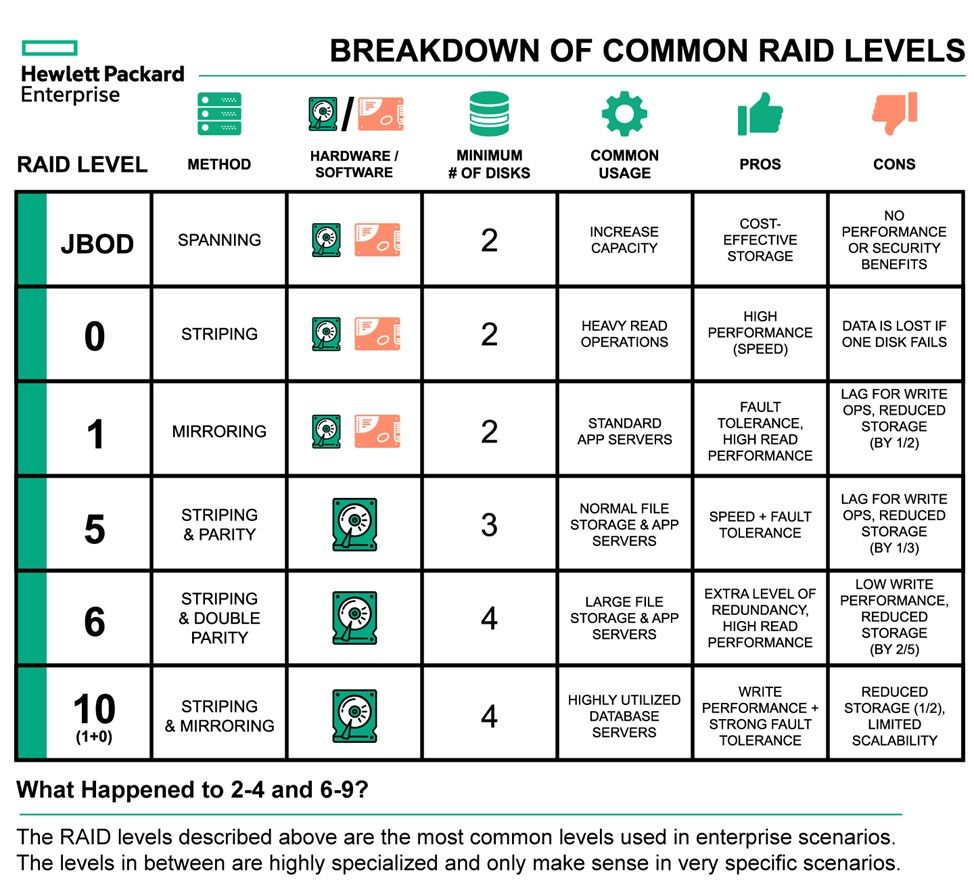