Do You Know About Windows Server Downgrade Rights?!

In past Coffee Coaching blogs we have covered many different topics relating to HPE OEM licensing for Microsoft® Windows Server®. Today, we will dive deeper into one of these topics: downgrade rights (and how they differ from down-edition rights).

Why are downgrade and down-edition rights important?

Downgrade and down-edition rights can simplify application migration scenarios for your customers by allowing them to license the newest Microsoft Windows Server product (so they can benefit from the latest and greatest technology) and then run earlier versions and/or down-editions of Windows Server in virtual instances (so they can support their legacy business applications that have not yet migrated to the latest technology).

What versions of Windows Server software are eligible for downgrade and down-edition? 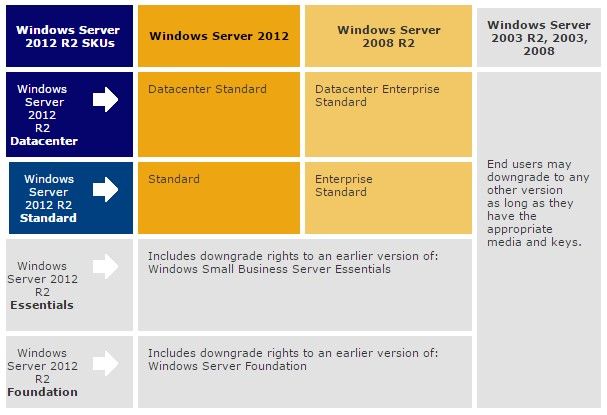 1. With server purchase: When a customer purchases a HPE OEM Windows Server 2012 R2 license on an HPE ProLiant platform they can request the downgrade kit at time of purchase.

2. After server purchase: If a customer already has a HPE Windows server kit, they can buy the downgrade directly from HPE here. **To do this, customers must provide a proof of purchase of their Windows Server license—such as an invoice or picture of their Certificate of Authenticity (COA) label—in order to request the media kit and keys.

Please let us know if you have questions on HPE OEM Windows Server downgrade or down-edition rights that we did not cover today and be sure to join the Coffee Coaching communities on Facebook, Twitter, YouTube, and LinkedIn.