Customers are increasingly requesting hybrid IT environments that span both on-premises and cloud and allow mobility of data and apps between the two. To help enable this, Microsoft introduced a new licensing model with Windows Server 2016 Standard and Datacenter edition. This licensing model reflects the need to enable portability of apps and data by creating a “common currency” for computing resources whether they are located on-premises or in the cloud.

With core-based licensing, there are 3 licensing rules that MUST be followed:

1) All physical cores in the server must be licensed 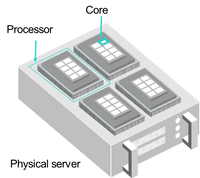 Virtual Machine rights with Windows Server 2016 Standard and Datacenter
Windows Server 2016 Standard edition provides rights for up to 2 Operating System Environments (OSEs) or Hyper-V containers when all of the physical cores in the server are licensed. Multiple licenses can be assigned to the same cores for additional OSEs or Hyper-V containers.
For example, to obtain 2 additional virtual machines (VMs) for Standard edition, simply re-license all of the physical cores on the server.