Did you know that many Microsoft software products, including Windows Server 2019 OEM licenses from HPE, include the right to use an earlier version of the software in place of the version that was licensed? These are called “Downgrade Rights”. In addition, Windows Server 2019 OEM license from HPE offer “Down-Edition Rights”, which allow users to run an instance of a lower edition (here, “edition” refers to the named version: Essentials, Standard, Datacenter) of the same generation of Windows Servers. Note: this is applicable only for certain products, and permitted under the product license terms.

HPE offers downgrade and down-edition kits that include installation media and product key in accordance with Microsoft OEM policies—some options may get discontinued over time, and some options are never released through the OEM downgrade/down-edition program. Most kits are available at the time of server purchase but can also be ordered after the server purchase. Downgrade kits will be fulfilled by Hewlett Packard Enterprise ONLY for a Windows Server license purchased directly from HP, Hewlett Packard Enterprise or any of our authorized Resellers.

Microsoft Server Downgrade Rights: What Your Customers Want to Know

1) With server purchase: When a customer purchases an HPE OEM Windows Server license along with a new HPE ProLiant Server, they can request the downgrade at the time of purchase. Most common downgrade options are available from the factory and include a DVD installation media and a product key.

2) After server purchase: Customers may also obtain a downgrade kit after the initial HPE OEM Windows Server product purchase by placing a request online at https://ebiz3.mentormediacorp.com/HPEDGRCR/.

Customers must be able to provide proof of purchase (such as a photo of the Microsoft Certificate of Authenticity (COA) showing the physical 5x5 Windows Server product key for the purchased HPE OEM Windows Server product). HPE can fulfill a downgrade kit for the same server OS only one time. 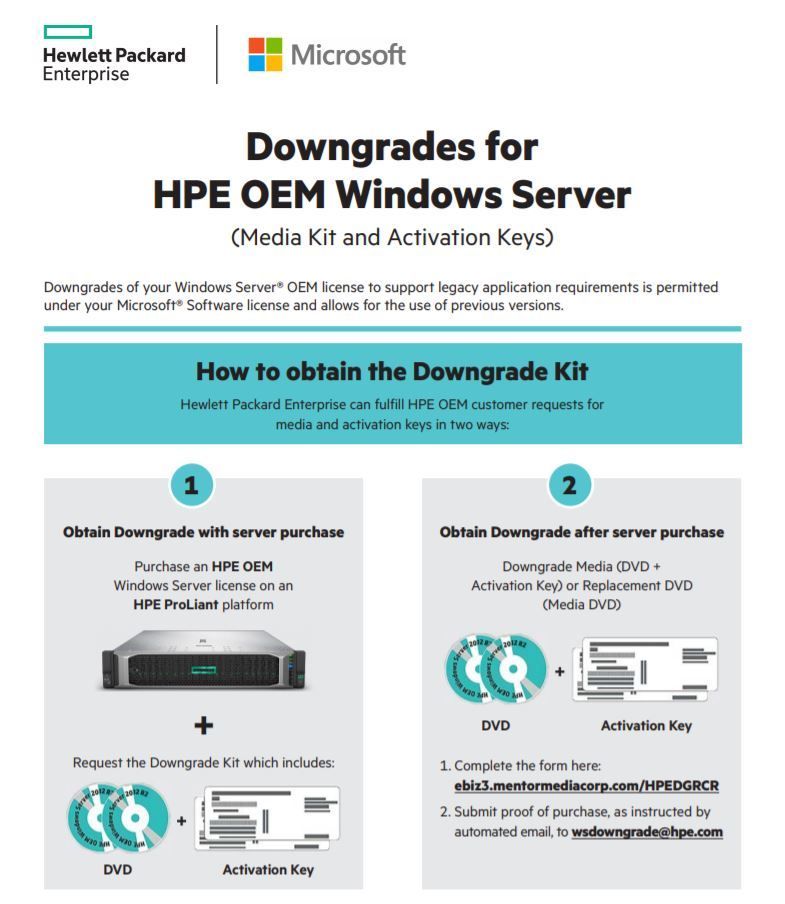