How VM data is managed within an HPE SimpliVity cluster, Part 2: Automatic management

This blog is the second in a 5-part series on VM data storage and management within HPE SimpliVity powered by Intel®. 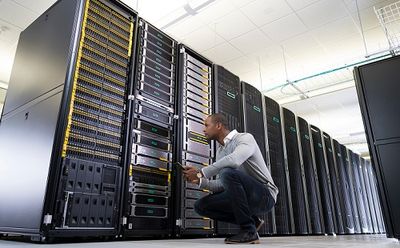 In the first blog of this series, I explained how data that makes up the contents of a virtual machine is stored within an HPE SimpliVity Cluster.

In this article, I describe in detail how the HPE SimpliVity DVP (Data Virtualization Platform) automatically manages this data, and how administrators can manage it as the environment grows. In particular, I will focus on the Intelligent Workload Optimizer (IWO), a core feature of the HPE SimpliVity DVP. IWO is responsible for the automatic management of data containers, intelligently placing VMs across HPE SimpliVity nodes.

By bringing awareness of the location of the data to the VMware Distributed Resource Scheduler (DRS), IWO can boost the performance of the infrastructure’s storage, compute and networking resources.

A closer look at IWO

IWO is comprised of two sub-components, the Resource Balancer Service and the VMware DRS integration service. IWO's aim is twofold:

Note: Resource balancing is an always-on service and does not rely on VMware DRS to be active and enabled on a VMware cluster. The service works independently from the DRS integration Service.

The primary goal of IWO (through the underlying Resource Balancer Service, a feature of IWO) is to ensure that no single node within an HPE SimpliVity cluster is over-burdened: CPU, memory, storage capacity, or I/O’s.

The objective is not to ensure that each node experiences the same utilization across all resources or dimensions (that may be impossible), but instead, to ensure that each node has sufficient headroom to operate. In other words, each node must have enough physical storage capacity to handle expected future demand, and no single node should handle a much larger number of I/O’s relative to its cluster peers.

The Resource Balancer Service will use different optimization criteria for different scenarios. For example, initial VM placement on a new cluster (i.e., migration of existing VMs from a legacy system), best placement of a newly created VM within an existing system, Rapid Clone of an existing VM, and VDI-specific optimizations for handling linked clones.

When creating or storage vMotioning a virtual machine to an HPE SimpliVity host or datastore, vSphere DRS will automatically place the VM on a node with relatively low CPU & memory utilization according to its own algorithms (default DRS algorithms). No manual selection of a node is necessary.

DRS Set to Fully Automated: The VMware cluster is selected as the compute resource. DRS automatically selects an ESXi server to run the VM.

In the below diagram, VMware DRS has chosen Nodes 3 and 4 respectively to house VM's 1 and 2. Independently, the DVP has chosen a pair of ‘least’ utilized nodes within the cluster according to storage capacity and I/O demand for the data containers of those VM's to be placed.

VM-1 and VM-2 have been placed on Nodes 1 & 2 and 3 & 4 respectively through the Resource Balancer Service.

IWO through the DRS integration service will pin VM-1 to Node 1 & 2 and VM-2 to Nodes 3 & 4 by automatically creating and populating DRS rules into vCenter. First, let’s look at how DRS rules are created.

Each DRS rule consists of the following components: 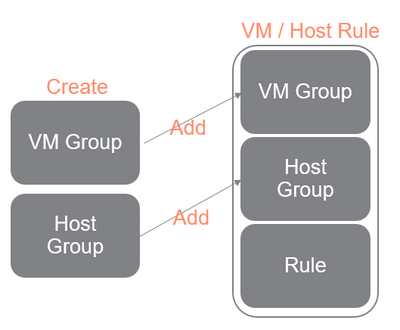 In this example, it is not optimal for VM-1 to be running on Node 4 as all of the I/O for the VM must be forwarded to either Node 1 or Node 2 in order to be processed.  If the VM can be moved automatically to those nodes, then one hop is eliminated from the I/O path.

Below, you can see VM-1 assigned to this VM Group. VM-1 will share this group with other Virtual Machines that have their data located on the same nodes. Note the Host ID is a GUID and not an IP address or Hostname of the node. While this may appear confusing to the end user, this is the actual GUID of the HPE SimpliVity node. Mapping the GUID to the hostname or IP address of the node is not possible through the GUI. You can use the command "dsv-balance-show --showNodeIP" if you do wish to identify the Node IP. 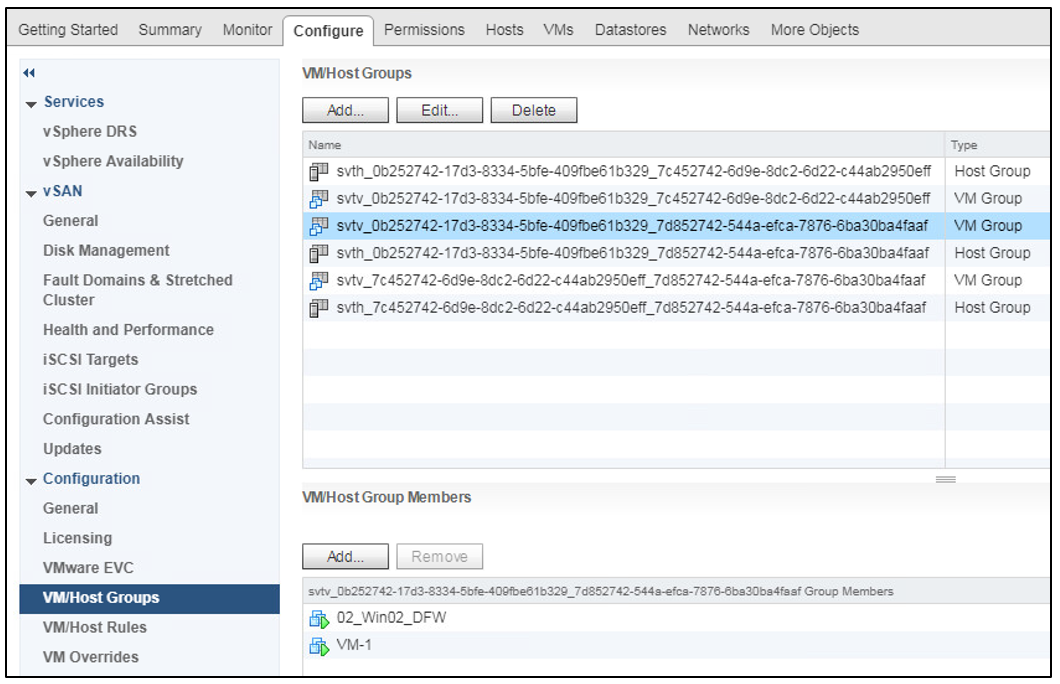 Again, all of this is handled automatically for you. However, for this blog to make sense, it is important for me to let you know where these values come from. 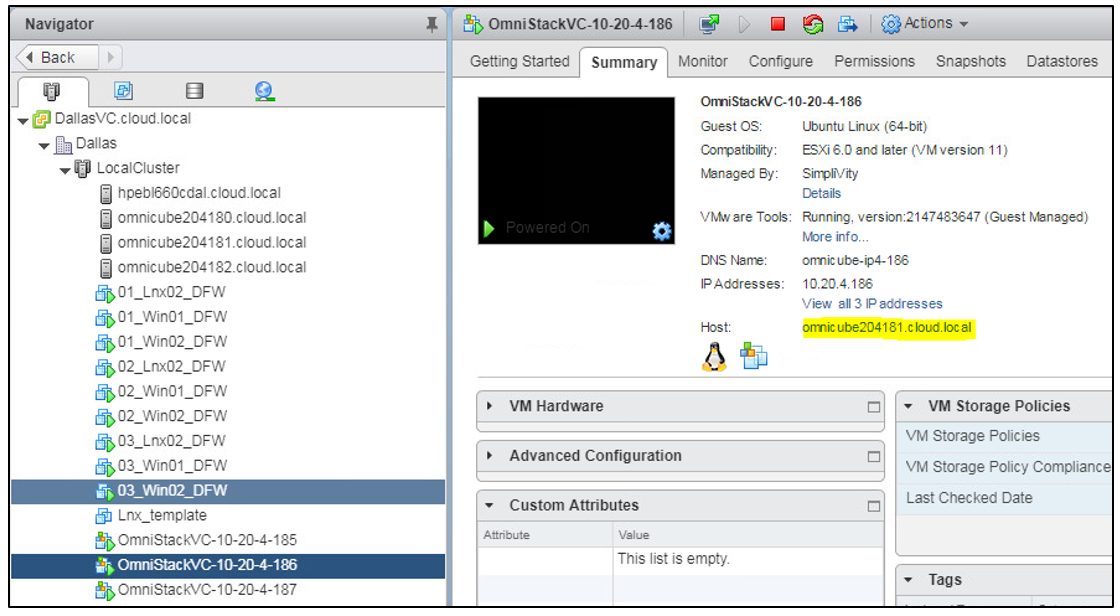 Identifying the Node (Host) associated with the OVC VM

You can also deduce that, as the Host DRS Groups are created, they are named SVTH_<hostID2>_<hostID3>. The host groups will only ever contain two nodes as the virtual machines only contain data on two nodes. There will be several host groups created depending on how many hosts there are in the cluster, one host group for each combination of nodes. Here I have highlighted the host group for Hosts 81 and 82 which the VM-1 will be tied to. 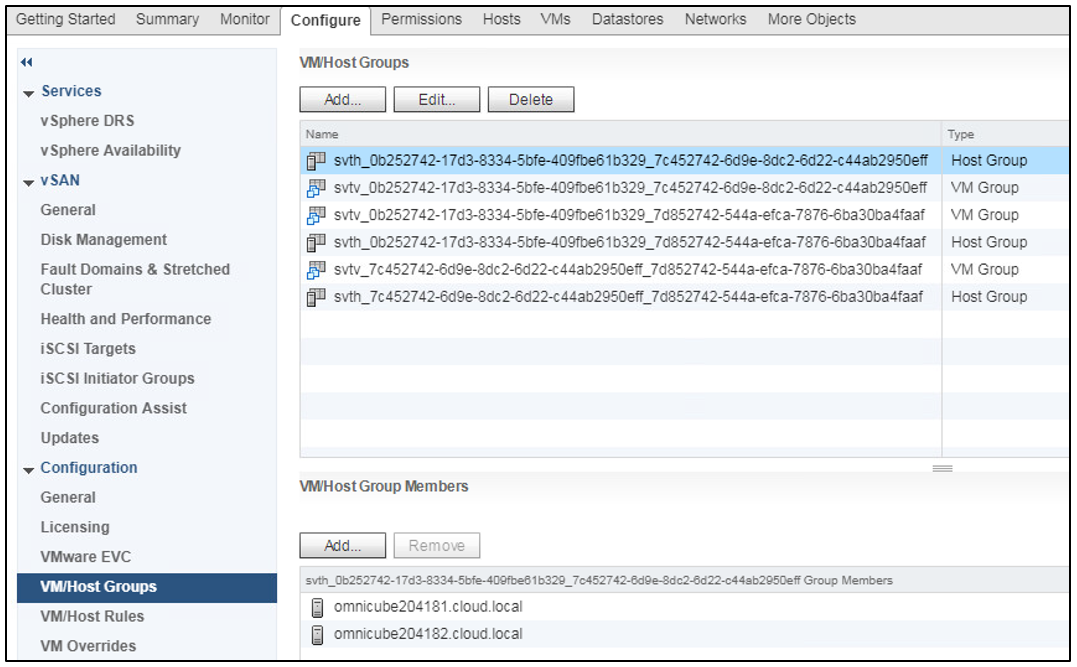 NOTE: The DRS affinity rules are should rules and not must rules. 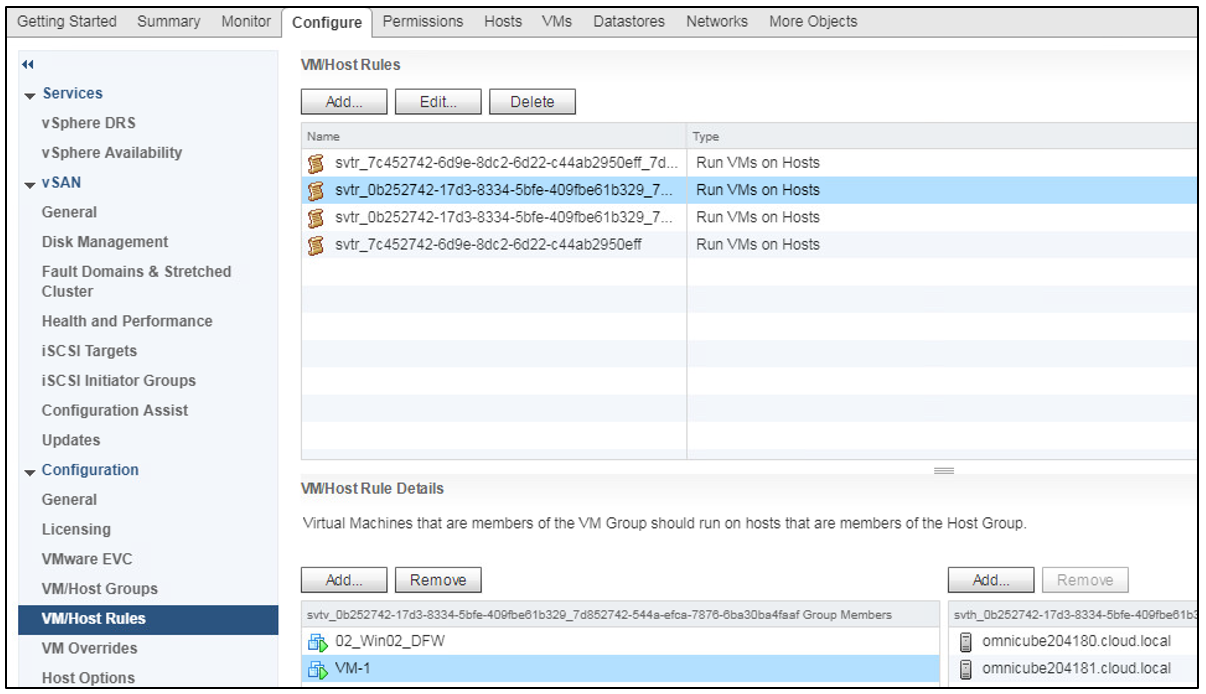 If set to Fully Automated, VMware DRS will vMotion any VM's violating these rules to one of the data container holding nodes, thus aligning the VM with its data. In this case, VM-1 was violating the affinity rules by being placed on Node 4 and is automatically vMotioned to Node 2 via DRS. 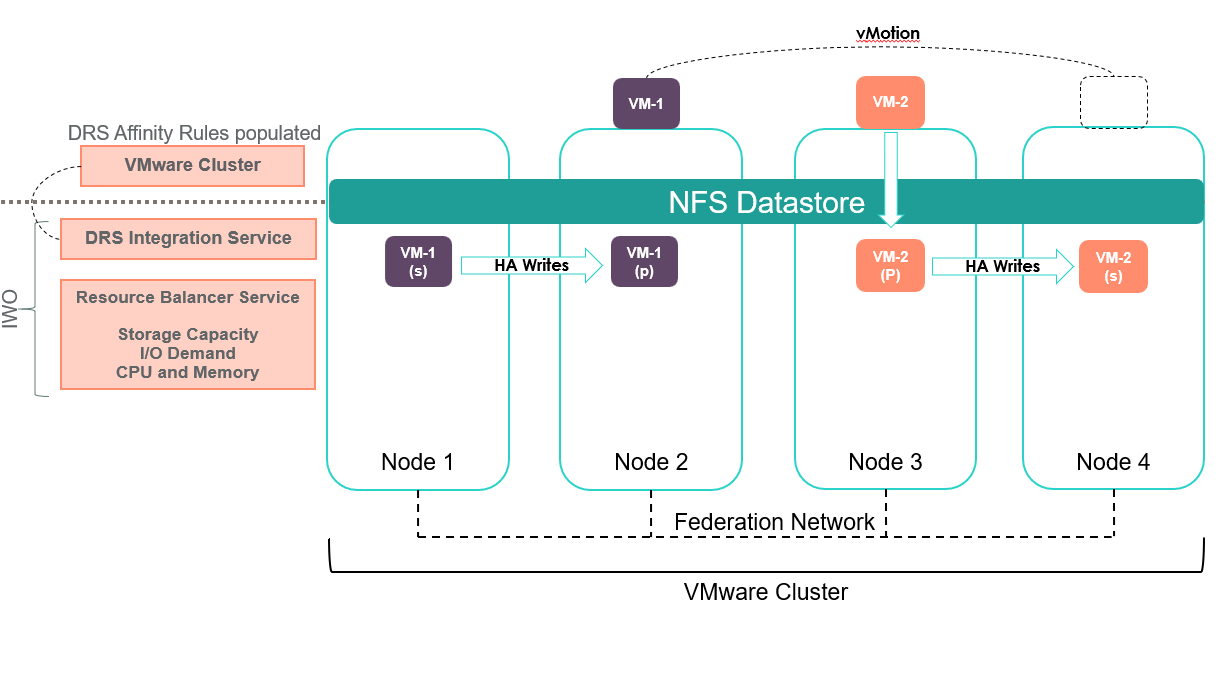 As stated previously, if VMware DRS is not enabled, the Resource Balancer Service continues to function and initial placement decisions continue to operate. However, DRS affinity rules will not be populated into to vCenter. 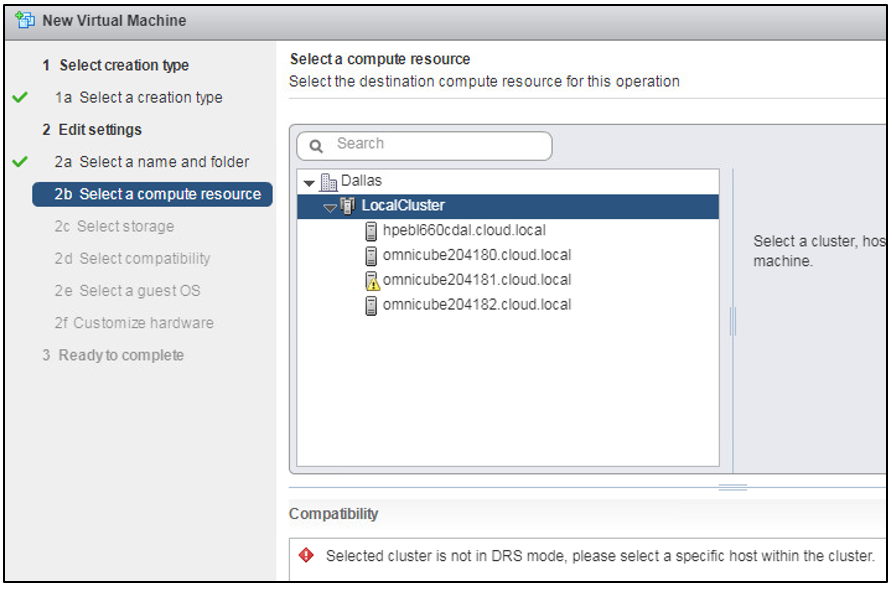 DRS Disabled - User must select a compute resource within the cluster

In this scenario when virtual machines are provisioned, they may reside on a node where there is no data locality. To help users remediate this issue, an HPE SimpliVity alert "VM Data Access Not Optimized" will be generated at the VM object layer within vCenter.

For remediation, the HPE SimpliVity platform will generate an event through vCenter Tasks and Events, directing the user to nodes that contain a copy of the virtual machine data. In the below diagram, I have highlighted the "Data access is not optimized" event that directs the user to vMotion the VM to the outlined hosts. 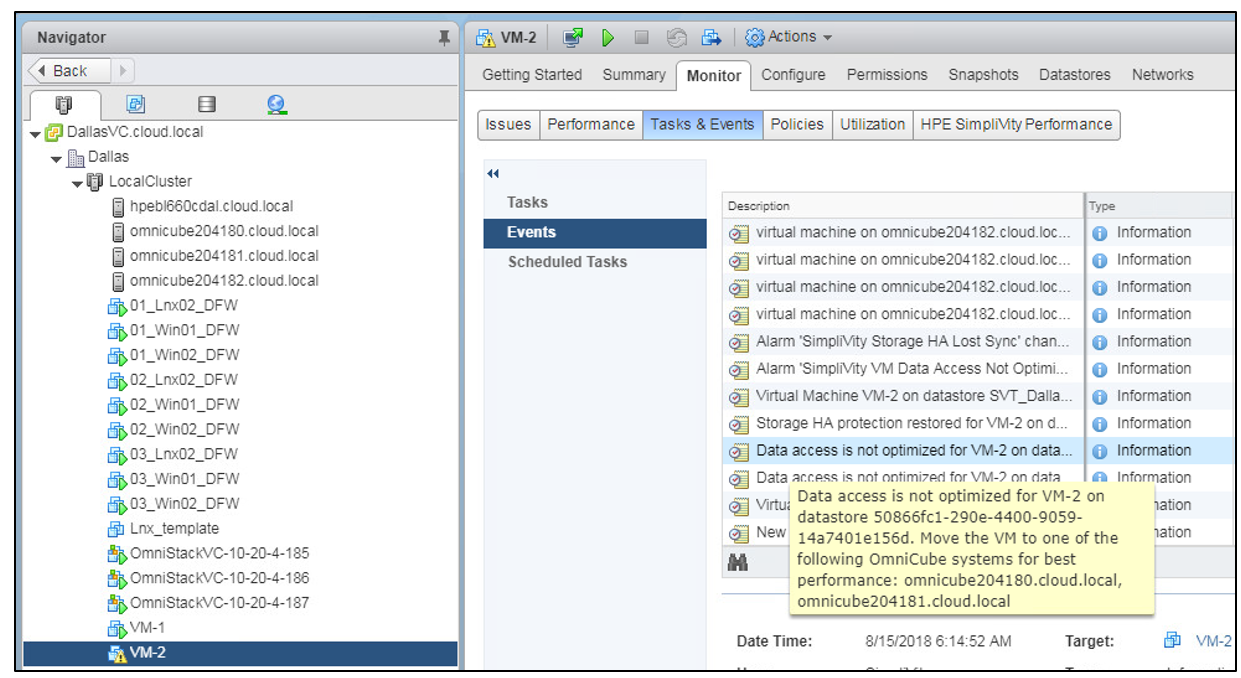 I have shown how the Resource Balancer Service behaves in regard to new VM creation. The service takes a different approach for HPE SimpliVity clones and VMware clones of virtual machines (VMware clones can also be handled by HPE SimpliVity via the VAAI plugin for faster operation).

In this scenario, the Resource Balancer Service will leave cloned VM data on the same nodes as the parent because this achieves the best possible cluster-wide storage utilization & de-duplication ratios. 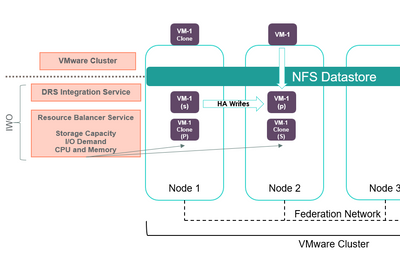 If I/O demand exceeds node capabilities, the DVP will live-migrate data containers in the background to less-loaded node(s).

The scope of VDI and VDI best practices is beyond this post; however, I did want to mention how the HPE SimpliVity platform handles this scenario. More information on this topic can be found at www.hpe.com/simplivity or in this technical whitepaper: HPE Reference Architecture for VMware Horizon on HPE SimpliVity 380 Gen10.

A single datastore per HPE SimpliVity node within a cluster is required to ensure even storage distribution across cluster members. This is less important in a two node HPE SimpliVity server configuration; however, following this best practice guideline will ensure a smooth transition to a three (or greater) node HPE SimpliVity environment, should the environment grow over time. This best practice has been proven to deliver better storage performance and is highly encouraged for management workloads. It should be noted that this is a requirement for desktop-supporting infrastructure. VDI environments typically clone a VM, or golden image, many times. These clones (replicas) essentially become read-only templates for new desktops.

To mitigate against this uneven load distribution, the Resource Balancer Service will automatically distribute replica images evenly across all nodes. This service aligns linked clones with their parents to ensure node-local access.

In the next post, I will dig a little deeper on the IWO mechanism to help you understand how you can manage the IWO service, if required.

Intel is an HPE partner