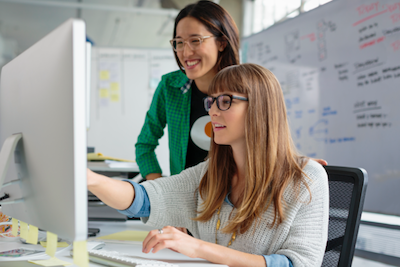 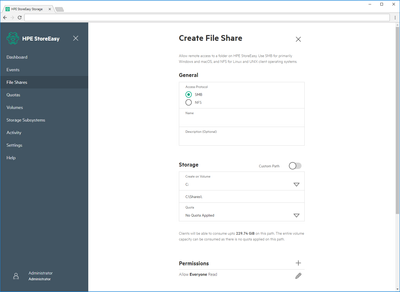 Combining the new REST API and the web-based graphical user interface in the new HPE StoreEasy management console is a defining element in our efforts to overhaul the StoreEasy user experience. The new UI complements existing Windows management tools, as Microsoft administrators must be allowed to use familiar tools. As StoreEasy serves a diverse range of customers, we built the UI to be easily usable by administrators with any level of expertise in managing storage.

The first version of the console makes file storage management on the Windows Storage Server 2016 operating system more effective by consolidating the tools file storage administrators use daily and exposing their functionality in an easy and cohesive interface. This empowers users to quickly provision and monitor file storage with minimal effort.

Customers with the new StoreEasy 1660 and 1860 can now download the StoreEasy management console through HPE Support Center.

Beyond adding value for our customers, why did we build the new StoreEasy management console? And what does it mean to your file storage?

Starting with the Windows Storage Server 2012 release, Microsoft has leapfrogged its file storage capabilities not only to better support non-Microsoft ecosystems with better NFS support, but also to enable enterprise application workloads with the introduction of the Server Message Block (SMB) 3 dialect. Features like Continuous Availability, combined with better scaling and robustness render it a perfect industry standard operating system to build an open file storage appliance.

Yet ultimately, it is an industry-standard operating system, designed to run applications and to be used as a hypervisor. The plethora of available management tools for it are dissimilar, general-purpose or inconsistent in terms of management capabilities. In previous generations, administrators used more than 12 different tools to manage the operating system as a simple file server. Efforts to consolidate these management tools into Server Manager as a “single pane of glass” seem to have stalled . . . to no surprise.

Many vendors tried and are still trying to sell the idea of a “single pane of glass” that can accommodate all management functions of a feature-rich solution, spanning all applicable use cases. The reality is that the more management functions are consolidated into a single tool, there is a tradeoff between allowing configuration flexibility (read: complexity) and simplicity (read: limited functionality).

Personally, I am convinced that the vision of a having a single tool to manage every aspect of a solution is doomed to fail. The variety of user personas, their skillset and intentions, and therefore their interaction requirements with a management tool, is far too exhaustive to be tamed and confined into a single tool without losing flexibility or degrading user experience.

A closer look at the new StoreEasy management user console

The use of familiarity in user interface design is much more essential as a driver for intuition when using a new management tool. Combining simplicity with clutter removal and a focus on the essential experience—along with a familiar layout and visual design—drives user satisfaction across different personas. The goal is to build a user interface that perfectly fits the task at hand and guides the user in accomplishing said task with the least amount of effort, all with minimal expertise required. For HPE StoreEasy Storage, the task is to manage the file storage functions of the Windows Storage Server 2016 operating system.

The foundation of enabling streamlined, user persona specific workflows in a modern graphical user interface is the exposition of a comprehensive set of product capabilities through a programmatic REST API that each user interface can consume to enable the desired outcome. This is exactly what we’ve done with the new HPE StoreEasy management console, available today for the sixth-generation StoreEasy products.

If you are a user who’s already familiar with HPE StoreEasy, you’ve probably noticed that advanced product features, such as File Screening, File Classification Infrastructure, or Reporting, are not listed here. But don’t worry, this release is our very first, and to further improve our customers experience with the product, we’ll be continuously improving and extending the capabilities of the REST API (we’ll publish the documentation for that soon) and the graphical user interface with your feedback in mind.

Remember, you can download the new management console from the HPE Support Center now. Try it and give us your feedback. And be prepared to see our file storage management product become even easier to use with future releases adding deeper functionality to help you take full advantage of features with minimal effort.

Meet Around the Storage Block blogger Tobias Flitsch, WW Technical Product Manager, HPE Storage. Tobias has been working in storage for more than seven years. As a former solution architect and now as a technical product manager, his focus is on various different scale-up and scale-out file and object storage solutions.