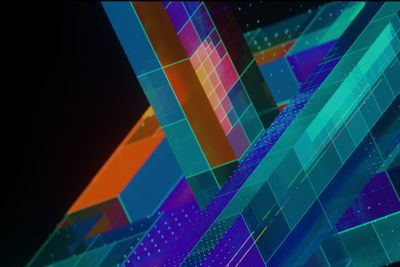 Every few years, the IT industry surprises us with an unexpected innovation that changes the rules. The new HPE Apollo and Veeam Backup and Replication v11 solution is that kind of innovation – so fast, it sets a new record in the data protection arena. Veeam’s engineering team did an amazing job optimizing v11 code, doubling performance of this all-in-one solution from one software release to the next.

End-to-end backup speed is a key performance indicator that is often kept vague, but every user needs to know this metric to help them design and deploy successful data protection solutions. For that reason, my team ran a series of lab tests on the backup speed of the new solution, and I share the details here.

The HPE and Veeam partnership provides comprehensive data protection solutions for hybrid IT. Veeam software integration with HPE primary and secondary storage platforms lets you create a range of solutions for just about every use case. We offer three main architectural approaches for backup target storage: all-in-one, capacity-optimized, and active backup.

The all-in-one backup solutions that I focus on in this blog are building blocks that provide balanced compute and storage resources tuned for Veeam v11 workloads. A number of exciting new features improve our HPE Storage and Veeam all-in-one solutions:

These solutions are based on legendary HPE ProLiant reliability to support all the main components of the Veeam Data Protection Suite:

The test environment for the new solution was comprised of the following configuration:

The test data source consisted of 42 VMs, each one with a dataset between 100 GB and 300 GB. To reflect a real production environment, the team created the data with a compression ratio of 2:1. About half of the VMs were on SAN-based volumes across the three storage arrays using the SAN transport mode and the "Backup from Storage Snapshot" integration between Veeam and HPE Storage arrays.

The other VMs were on the internal disks of the 7 ESXi servers. Each ESXi server also had a VM-based Veeam proxy to read data via hot-add, instead of using the slower NBD transport mode.

The Veeam backup repository test configuration was based on: 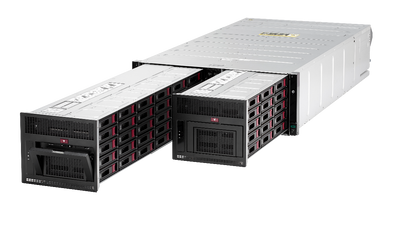 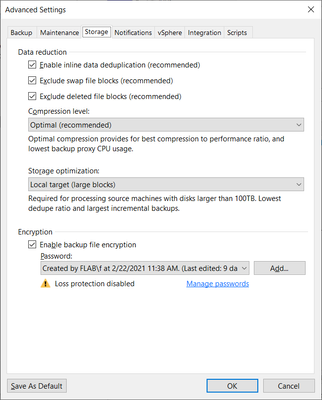 Screenshot 1 displays the backup job storage parameters. Please note that encryption was active despite the additional CPU workload that it produced. 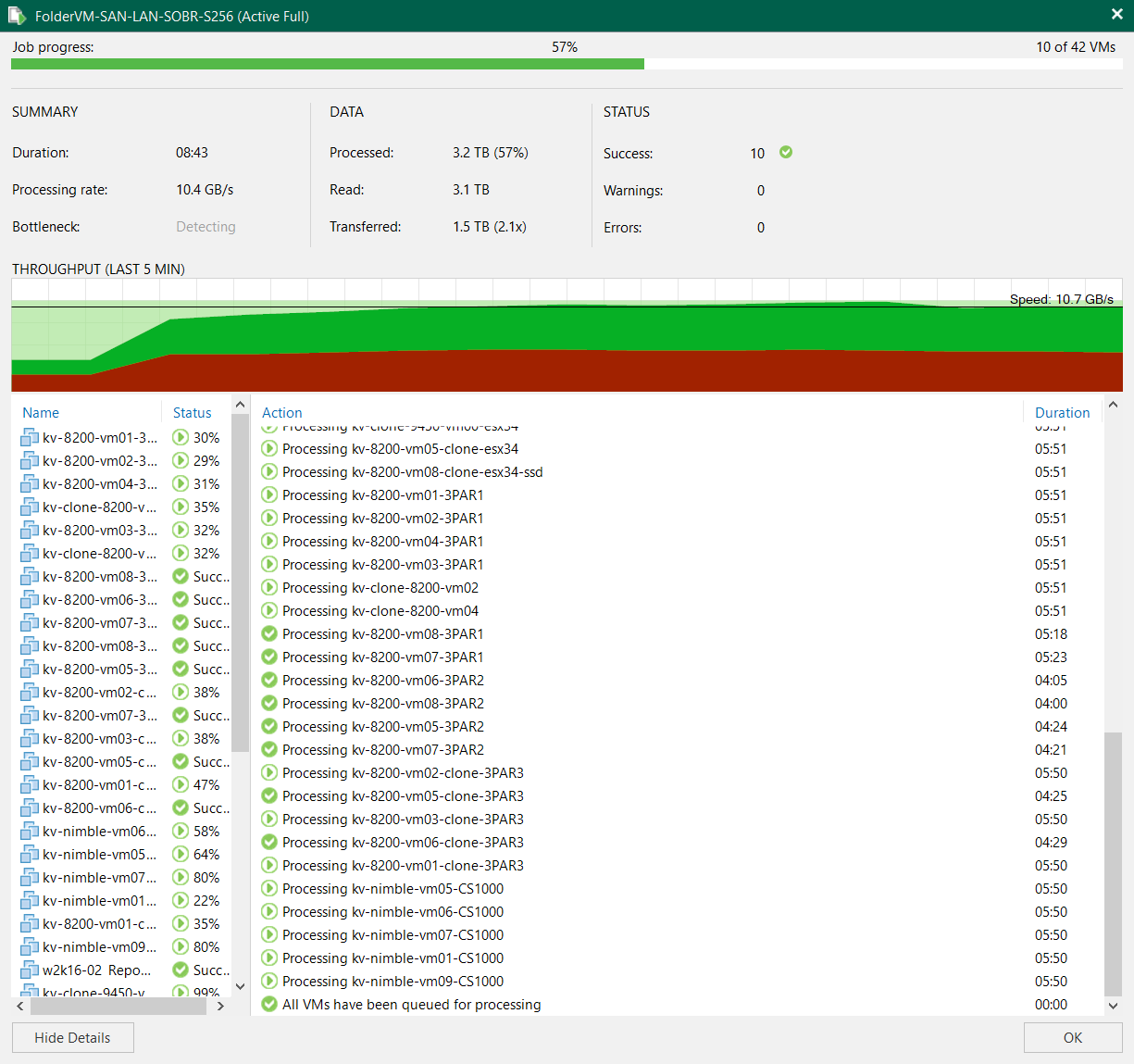 Screenshot 2, taken while the backup was in progress, highlights the average throughput. During the test, full backup performance remained above 10.4 GB/s for the first half of the job, with a peak at the impressive speed of 11.5 GB/s. Note that the 10.4GB/s average speed is negatively weighted by the initial ramp-up. With a larger dataset that number would have been closer to the peak number. 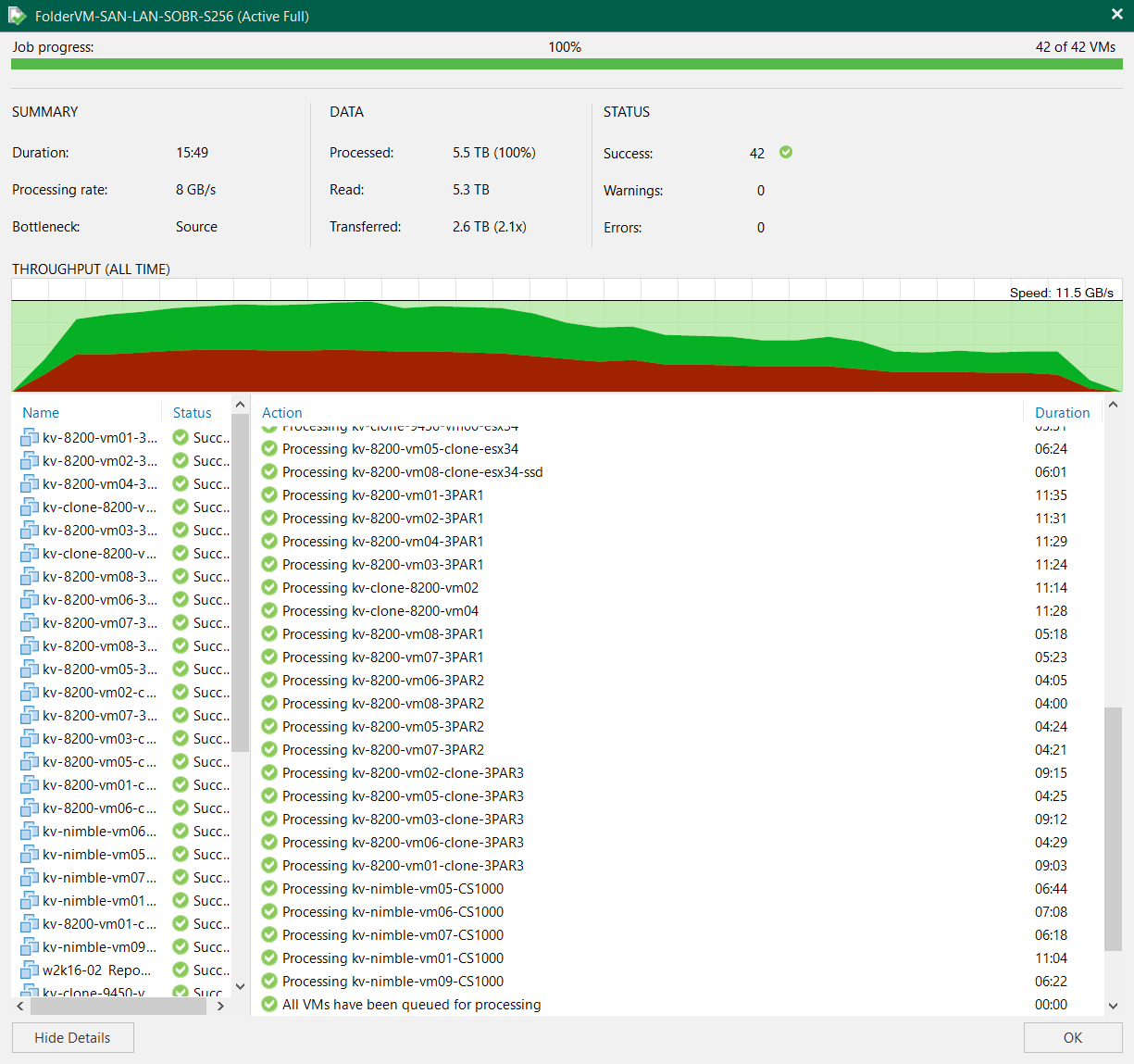 In the second part of the job (screenshot 3), you can see that the throughput progressively decreased as the individual VM processes finished, because the remaining data sources didn’t have enough performance to adequately feed the backup job.

In a real environment, a backup job would have hundreds of VMs to protect and an active pool of about 30 to 50 processes. As soon as one process completed, a new one would automatically be started. This way, throughput in a real environment would remain high until the end of the job.

Unlike Veeam v10 and previous releases, the v11 release intelligently avoids using the Windows FS buffer cache in RAM. For this reason, the backup throughput of this test does not include any temporary use of a RAM buffer. It is real, steady, and sustainable throughput with data going directly to disks.

System workload during the job execution

The next series of screenshots demonstrate how the different system components reacted to the Veeam backup workload. The screenshots have been taken at roughly the same time as Screenshot 2. Note that the performance monitor adopts the decimal notation with 1GB=10^9 and not 2^30 as in the Veeam GUI. For this reason, numbers seem 7% bigger. 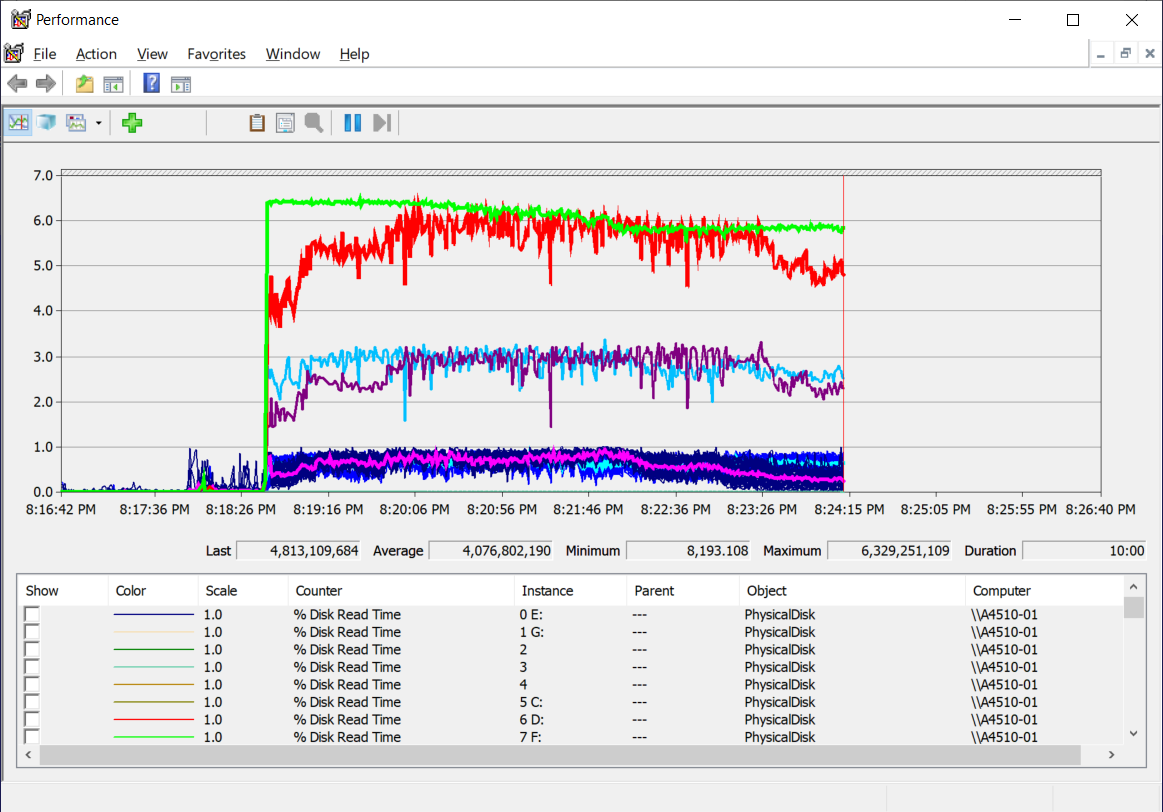 The single cores are represented by the many overlapping lines darker blue lines. [Note: Previous test results, not included here, demonstrate that by disabling job encryption, the resulting CPU load is about 20% lower.] 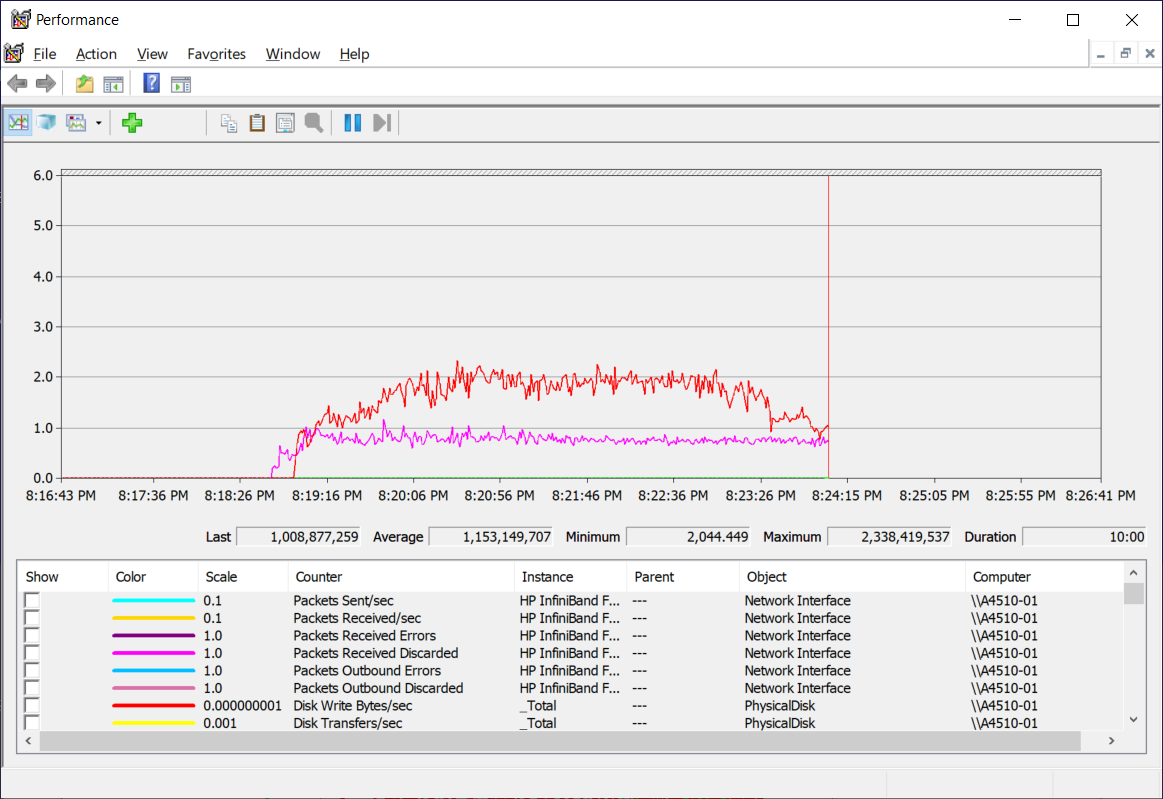 Screenshot 5 shows the physical LAN throughput. As described above, half of the backup data arrives from SAN and half from LAN. The data arriving from LAN is pre-compressed (2:1) by the VM-based proxies. The test system has two 40GbE ports (the newer configs are based on 50/40/10 ports) configured in teaming LACP mode. 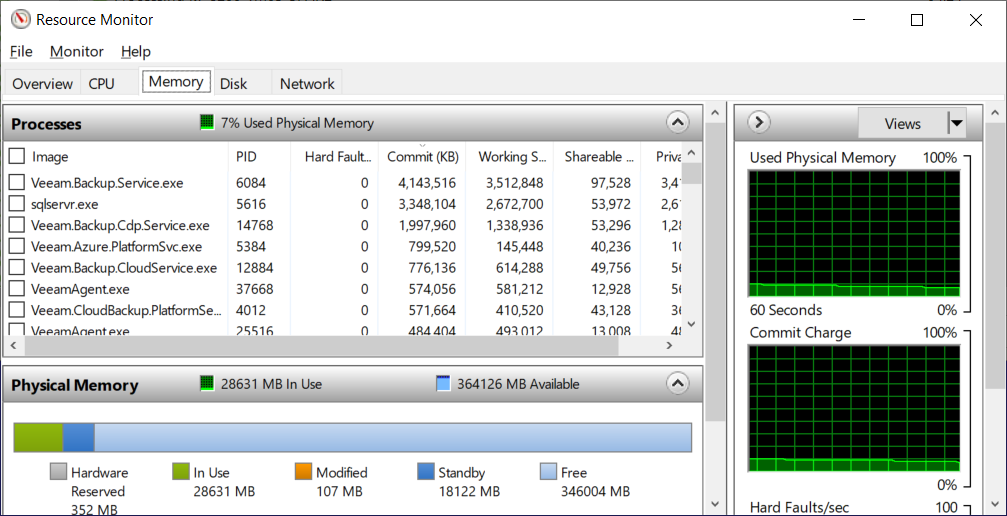 And finally, screenshot 6 captures the system memory (RAM) utilization. Note that the test system has more memory (384 GB) than the recommended configuration (192 GB). As you can see, the new Veeam v11 solution is very efficient when it comes to memory utilization. In comparison, an equivalent screenshot taken during a backup with v10 would have shown a wide orange segment (FS buffer) that consumed almost 50% of the available RAM.

HPE lab tests clearly demonstrate that this HPE Apollo 4510 configuration with Veeam Backup and Replication v11 is extremely fast. The 100% acceleration in performance from just one release upgrade (v10 to v11) is something unusual in the IT industry and very exciting, especially considering that the previous release was already fast.

As usual, big improvements are the result of a persistent and enduring effort. Credits go to the Veeam engineering team for the deep optimization they have introduced with their new code, but the teamwork goes back much further. In the past two years HPE has been working with Veeam, testing multiple hardware configurations and multiple official and pre-production software releases, including "secret" Veeam-engineering-reserved registry keys – all with the goal of removing bottlenecks and improving efficiency in our combined software and hardware integration.

As these test results prove, the team accomplished their goals.

Learn more about the recent Veeam v11 release in this podcast from HPE Storage and Veeam.

Find more solutions from HPE and Veeam at www.hpe.com/partners/veeam