I have 2 HP 2530 switches connected together through a trunk. The first switch is connected to a Palo Alto 200 firewall. I created 2 new VLANs on the switches and the PAs, but i cannot ping the firewall DMZ IP from the DMZ VLAN on the switch.

There is something strange in your conception of "trunk"...it looks like a little bit Cisco biased.

you're just configuring 2 Port Aggregations (respectively trk1 and trk2), each one, respectively composed by just one port in static mode (trunk=non protocol=static...which, in other terms, mean you're not going to bond member interfaces of the trunk using a dynamic protocol like LACP)...so port 23 is part of trk1 and port 22 is part of trk2. Both trk1 and trk2 are logical interfaces against which you would set tagging/untagging (untagged/tagged VLAN memberships will propagate automatically down to trunks' member interfaces...so you should not worry about that).

Now the interesting part: setting a Port Aggregation with just one port is somewhat very strange...possible but really strange...so, what you want to achieve? what is your topology? who is connect to what? in which port? who is responsible for performing VLAN IP routing (The Palo Alto or one of your two HP 2530)?

Unfortunately, I inherited this from another guy and it's in another office, so it's really hard to manage. Also, I have never dealt with HP switches before. I don't know why only one port is part of the trunk.

I want the PA to handle the VLANs IP routing...

I have Cisco 2960 switches in other offices...I have similar setup, and everything is working fine . Please see below (thought this might be helpful to understand what i am trying to achive)

Please let me know if you need more information.

First strange thing: with regard to the Cisco example you provided for other offices with similar setup - where all is OK - VLAN tagging/untagging can't be seen...so hard to tell you how Cisco trunked (AKA permitted VLANs passing on one interface...this in Cisco jargon) VLANs to related firewall and to downlinked other switch (there are two ports trunked 1/0/1 and 1/0/2)...so I can't do a 1:1 comparison to see how you setup...apart from that I'll concentrate on the HP scenario you're dealing with.

On HP-2530-1 trk1 (port 22) and trk2 (port 23) are tagged on every VLAN you defined on the HP and are untagged member of VLAN 1...so I suspect that you are using both ports to transport those VLANs to Palo Alto and to the other HP Switch...which port do what you know, I just supposed that port 22 goes to Palo Alto and the other goes to the other HP...but it could be the contrary (it doesn't matter)...this means that trk1 and trk2 transport all your VLANs somewhere. Good.

Since you haven't on that HP access ports (for client hosts) on other VLANs than the VLAN 1, VLAN 60 and VLAN 99 then a step further would be test ping from port 3 (see above) or 15, 17, 19 (see above)...since VLAN 60 and VLAN 99 are transported (permitted) on trk1 (port 22) then a client on one of those ports (with the right client IP addressing) should be able to ping directly the Palo Alto IP Address(es) associated to the VLAN where the client is (and if the Palo Alto firewall inter-VLAN routing is configured accordingly also other VLAN IP address space). Does this happen?

Thanks again. Here are the answers to your questions:

I need to recap...since HP 2530 can't perform any IP Routing feature...it's a matter of understanding exactly your topology (an image would help) and read carefully what you wrote about 2530. 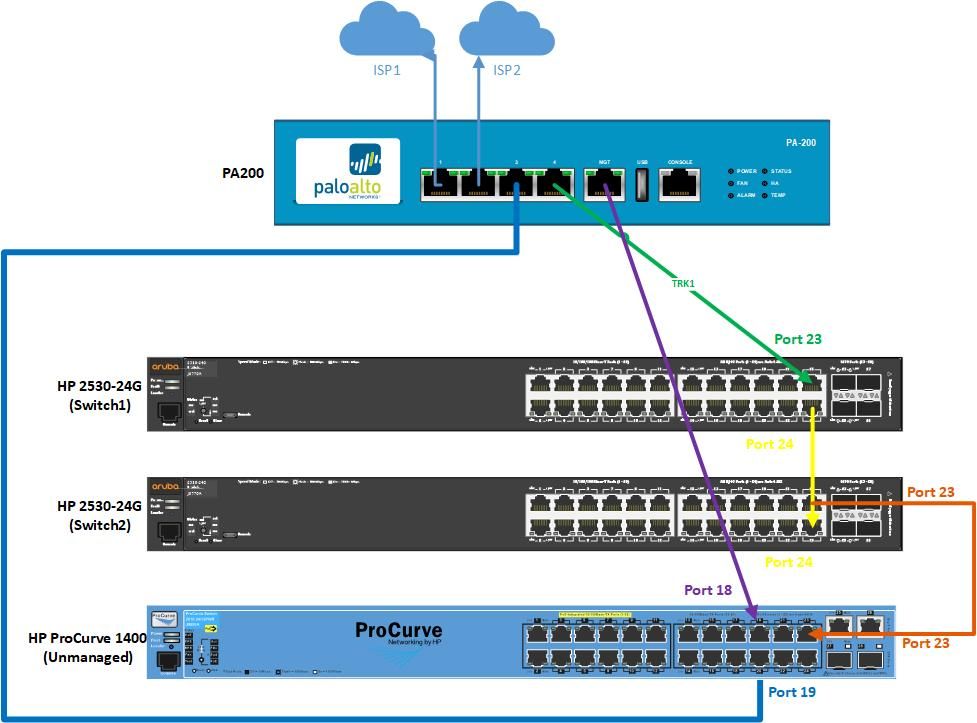 i am pretty sure the issue is because the firewall interface is connected to the unmanaged switch...thoughts?

Well, the unmanaged HP ProCurve 1400 doesn't support VLAN Tagging so it is unaware of any other VLAN tagging applied to traffic egressing the port of other Switch it is connected to...in other terms if port 23 of the HP 2530-24G Switch 2 (connected to port 23 of the unmanaged) carries multiple VLANs then only the untagged one it is recognized...that's because an unmanaged Switch is just a VLAN-unaware up/down-link to an untagged port assigned to a VLAN on a managed Switch...and so you're just not going to be able to carry tagged (trunked in Cisco jargon) traffic of multiple VLANs to that unmanaged Switch.

Clearly things get weird if the Port 23 of Switch 2 carries tagged traffic (it's a trunk port in Cisco terminology)...since the unamanaged is VLAN unaware it could discard or not tagged traffic (802.1Q frames).

At this point I will leave it out of the equation beacuse, if deployed, it should just be an extension of Port 23 Untagged VLAN of Switch 2.

In my head the Palo Alto port 4 is the interface on which you are tagging all required VLANs (apart leaving VLAN 1 untagged) and so Port 23 of Switch 1 should be configured to be untagged member on VLAN 1 and tagged member of all remaining VLANs (the same on Ports 24 on both Switch 1 and Switch 2 if Switch 2 is an extension of Switch 1)...doing things that way and letting the PA to be the router then you just require to set required access ports on Switch 1 and 2 to belong to desired VLANs to let them speak to PA (that will become their Default Gateway)...this becasue 2530 switches can't perform any IP routing service.

I will remove/get rid of trk1 and trk2 on HP 2530 switches and just define port 23 and port 24 as untagged members of VLAN 1 and tagged members of all the VLANs you have defined on PA's Port 4...that's essential to let Switch 1 to transport all VLANs to PA Firewall...then I will do the same for port 24 of Switch 2...to let Switch 1 and 2 to transport all VLANs each others.

VLAN IDs defined on Switch 1 and 2 should clearly match and they should match with those on PA firewall (that's pretty clear).

At that point an host connected to an access port member of (so to a port untagged on) VLAN x either on Switch 1 or on Switch 2 should be able to ping:

Personally, if not disruptive for your operation, I would temporarily disconnect Port 3 and MGT of PA and Port 23 of SW-2 (downlink to HP 1400)...to test scenario proposed...then I'll plan how to reconnect them correctly (that is, depending on their pourposes).