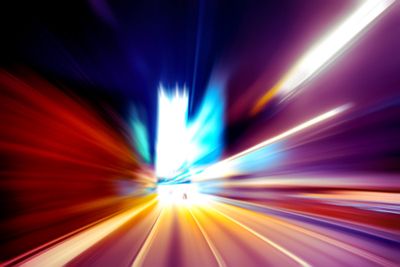 The “hype” centers around the potential savings promised to companies by combining compute, storage and networking into a single system by running virtualization software on standard servers.

For this reason, we are seeing IT rapidly adopting the hyperconverged model. The lines between compute and storage systems start to blur as you examine the capabilities of industry standard hardware to carry out more and more complex and powerful workloads on virtualized, on premise hardware which offer the benefit of scalable performance and efficiency. This drastically simplifies deployment and management within the IT storage environments from the traditional disaggregated, dedicated hardware stacks still common today.

Why HPE SimpliVity for hyperconverged

HPE SimpliVity is the ideal hyperconverged platform, bringing together software-defined compute, storage, and management all wrapped up with best-in-class services on the world’s best-selling server. The hyperconverged infrastructure provided by SimpliVity has grown in popularity in the enterprise space, and promotes a scale-out architecture that is flexible and always built on Ethernet networks.

As IT shifts to this new model of hyperconverged infrastructure, traditional bottlenecks start to move from CPU and hard drives, to the network. This means that 1/10Gb and even higher bandwidth Fibre Channel (8/16Gb FC) networks can’t keep up with the demands placed on them by this new style of compute and storage workloads. HPE brings to market a fully end-to-end 25Gb Ethernet solution specifically tuned for converged storage workloads like those running on SimpliVity. This means a 2.5x improvement in throughput through the entire hardware stack. HPE SimpliVity utilizing 25GbE network adapters connected to storage optimized HPE StoreFabric M-series (powered by Mellanox Spectrum) 10/25/50/100GbE Ethernet switches, unleash the capabilities of what hyperconverged IT can offer. The M-series provides the ideal combination of performance, rack efficiency, and flexibility for today’s software-defined storage and hyperconverged infrastructure, and presents an easy migration path to next-gen networking. 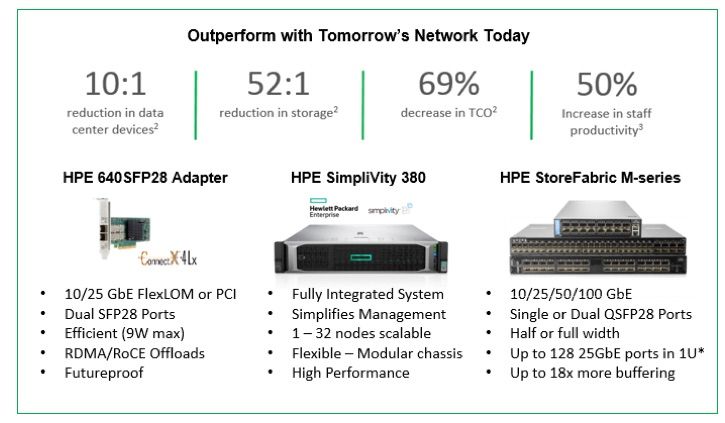 Transferring network and storage data over a dedicated network requires predictability and guaranteed performance to handle the shared data flow. Storage networks require data transfer to be consistent, predictable and fast. This means that dropped packets and intermittent latency on a switch can have a detrimental effect on the overall systems efficiency. The M-series delivers low latency and the consistency required, no matter what packet size, speed or port combinations are used. By allocating the switch bandwidth fairly across all ports, and employing advanced buffers optimized for storage environments, packet loss can be avoided from occurring in even the most harsh microburst situations, which are common in shared networks. Packet loss can severely impact performance and can cause a critical condition for storage workloads. In short, when it comes to storage data over shared networks, high latency, inconsistent performance, and packet lost must be avoided. Without the right switch, the network fabric can significantly impact the efficiency of the hyperconverged infrastructure.

Increased bandwidth is necessary to keep pace with the growing densities within virtualized servers, and in hyperconverged environments which house densely virtualized environments, we are seeing a new traffic pattern evolve with an increase in east-west traffic. This massive shift in machine-to-machine traffic has resulted in a major increase in required network bandwidth. The arrival of faster storage in the form of solid state devices such as Flash and NVMe is also driving increased bandwidth demands.

However, you can also increase efficiency and bandwidth beyond bandwidth rate with the use of Remote Direct Memory Access (RDMA). RDMA is the process of removing the CPU’s involvement in the transfer of large amounts of data by using specialized networking equipment that offers offloads for processing the requests in the network, not on the CPU. This reduces the CPU usage and leaves more cycles available for server applications. This requires a RDMA enabled network adapter and support from the switch, both of which are supported by the HPE 25GbE adapters (sucah as Mellanox ConnectX) and HPE M-series switches.

Hyperconvergence is used to consolidate legacy data center silos into a more modern data center topology consisting of racks of versatile compute/storage nodes. Before the introduction of unique half-width top-of-rack (TOR) switches, customers had to install a 48+4-port TOR switch with more than half of the switch ports unutilized within each rack. To make the situation worse, if TOR switch redundancy was required, which is the case for most modern enterprise deployments, the under-utilization was exacerbated.

The waste in rack space, power consumption and cooling was also multiplied. For example, two typical full rack switches would have 96 ports + 8 uplink ports, but a typical hyperconverged cluster of 16 servers would only use 32, or one third, of those ports. In deployments with confined space and stringent power and airflow requirements, the legacy TOR switches simply turned out to be unusable. With the half-width, 1U M-series switches the user can put two units side-by-side in 1U of rack space, achieving the necessary network connectivity and high availability (HA). The same 16-server cluster would achieve HA using 32 ports (of two SN2100M), a perfect sizing of the switch to the deployment. The rack efficiency achieved is significant due to the unique half-width size and high bandwidth.

Combine the native utility and functionality offered by HPE SimpliVity with the efficiency and TCO savings offered by HPE StoreFabric M-series Ethernet switch family, especially the SN2100M half-width TOR switch, and you have a truly game-changing hyperconverged offering.